from Wikipedia, the free encyclopedia
This is the spotted version , flagged on June 25, 2020 . There is 1 pending change that has yet to be viewed.

Aulendorf is a town on the western edge of the Schussental in the Ravensburg district in the south-east of Baden-Württemberg . The former royal seat and railway town is a health resort .

Aulendorf was originally a market town and residence of the Counts of Königsegg-Aulendorf , grew rapidly as a railway junction in the 19th century , received city ​​rights in 1950 and was enlarged again in 1972 as part of the municipal reform . Aulendorf is a Kneipp health resort and has several clinics and a thermal bath.

Aulendorf is located in the center of Upper Swabia, north-northwest of the Altdorf Forest and extends into the Schussen basin, which is popularly known as the Schussental.

Nearby (near Bad Schussenried ) is the Schussenursprung , the source of the Schussen , where Aulendorf is located. The urban area extends from 540 to 676  m above sea level. NN . The highest point is a point in the forest between the Hohkreuz chapel and Ebisweiler.

Chapel of St. Joseph in Tannhausen

The urban area of ​​Aulendorf consists of the core town and the municipalities of Blönried, Zollenreute and Tannhausen, which were incorporated as part of the municipal reform of the 1970s.

These three areas or city areas are at the same time places within the meaning of §§ 67 et seq. Of municipal code, that is, they each have one of the voters at each municipal directly be selected Ortschaftsrat , with a mayor as chairman. The number of local councils is nine in all localities. On January 1, 2006, the local administrations in all three suburbs were dissolved. 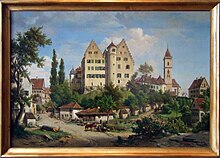 Aulendorf was first mentioned in the 10th century as Aligedorf . At first it was Welf property , then Staufer , from the late Middle Ages under the Lords of Königsegg, then under the Counts of Königsegg-Aulendorf and from July 12, 1806 under Württemberg . In 1682 Aulendorf received market rights after the newly formed Königsegg-Aulendorf line had moved here in 1681. In the Kingdom of Württemberg the place belonged to the Oberamt Waldsee .

Aulendorf has been on the Ulm – Friedrichshafen railway since May 26, 1849 , and when the Herbertingen – Isny ​​railway was opened on July 25, 1869, the place became a railway junction . The Aulendorf locomotive station, which was still preparing peat -fired locomotives for operation until 1910 , was expanded into a railway depot after the First World War .

During the administrative reform during the Nazi era in Württemberg , Aulendorf came to the Ravensburg district in 1938.

After the Second World War, Aulendorf was part of the French occupation zone and thus became part of the newly founded state of Württemberg-Hohenzollern in 1947 , which was incorporated into the state of Baden-Württemberg in 1952.

In 1950 Aulendorf was elevated to the status of town, in 1956 the Progymnasium and 1974 the fully developed grammar school opened.

Aulendorf has both a Roman Catholic and a Protestant parish ( parish Aulendorf ). The New Apostolic Church is also represented in the city.

Castle square with maypole next to the Sparkasse Aulendorf

Georg Eickhoff (CDU) surprisingly announced his resignation on May 27, 2008. Matthias Burth, who was elected on August 31, 2008 and who was previously a treasurer in Talheim , has been in office since October 1, 2008 . For the period from June to October, Edgar Schaz, leader of the Free Voters faction in the Ravensburg district council, was appointed by the municipal council as administrative administrator .

In 2008, the city of Aulendorf had around 64 million euros in debt with 10,000 residents. This made it the most heavily indebted community in Baden-Württemberg. The debts stem mainly from a failed spa policy in the 1990s and urban mismanagement.

The spa clinics and thermal baths built under Mayor Johannes Heinzler (CDU, 1988–2004) could not be operated profitably from the start. The resulting deficits were covered by the city. Missing annual accounts, fake contracts and booking tricks made it possible to cover up the financial problems from the supervisory authorities for years. At the end of 2004, Aulendorf's official debt was 20 million euros. In 2008, Heinzler was sentenced to a fine by the Bad Waldsee District Court for breach of trust. He had sold urban land below its value.

The mayor from 2004 to 2008, Georg Eickhoff (CDU), privatized the clinic and the nursing home. In addition, he presented a budget security concept that provided for the closure of local administrations, the cancellation of association subsidies, the introduction of hall fees and savings in cleaning services. Nevertheless, the debt load rose to 64 million euros under his aegis. The city lost six million euros because it did not collect sewer and sewage fees from homeowners. Eickhoff accused Kurt Widmaier of the district administrator of the Ravensburg district of having violated his duty to supervise the community during the years in office of his predecessor and thus complicit in the mountain of debts in Aulendorf. The municipal council decided on December 27, 2007 to sue the state of Baden-Württemberg as the legal supervisor of the Ravensburg district for 22.3 million euros. The lawsuit was withdrawn by the local council on August 25, 2008.

The municipal examination institute (GPA) came to the conclusion in June 2008 that the city can no longer dispose of the mountain of debt on its own. She accused the administration of a non-transparent presentation of the actual financial strength, a lack of countermeasures and deficiencies in the structural and procedural organization. Mayor Eickhoff resigned from office shortly before the GPA report was handed over.

In 2009, the Baden-Wuerttemberg Council of Ministers decided on a package of measures that provides the city of Aulendorf with financial aid amounting to 39.2 million euros by 2016, while at the same time making drastic savings. Aulendorf is the only town in Baden-Württemberg that receives financial support from the state.

By the end of 2018, the city's debt is expected to have shrunk to 13 million euros. At the same time, the municipality plans to have reserves of EUR 8.6 million.

Blazon : "Under the shield head in gold, roughened by bars of red and gold, a simply winged, rotating black wheel with a golden rim and hub."

Declaration of coat of arms: In the main shield, the coat of arms refers to the red and gold roughened coat of arms of the imperial counts of Königsegg-Aulendorf, the former owners of Aulendorf. The winged wheel stands for Hermes from Greek and Mercurius from Roman mythology . He is the messenger of the gods and symbolizes the connection, the exchange of goods, the trade. The wheel illustrates the importance of Aulendorf as a railway junction or in earlier times without cars.

From 1969 to 2005 Aulendorf took over the sponsorship for the U 12 submarine of the German Navy. Before that, it had sponsored the inland minesweeper Holnis in 1967/68. As a result of these sponsorships, the marine choir was created in Aulendorf.

The city of Aulendorf has been twinning with the French municipality of Conches-en-Ouche in Normandy since 1960 .

Until 1999, a small garden railway ran around the museum locomotive. While some of the tracks are still there, the garden railway has moved to Kürnbach , as part of the area was needed for a new road.

There are 137 small monuments around Aulendorf and its suburbs and hamlets .

Aulendorf is a stronghold of the Swabian-Alemannic carnival . The driving force is the Aulendorf fools' guild with the fool figures Eckhexe (since the late 1930s), Schnörkele and Fetzle as well as the pair of figures Tschore and Rätsch .

There are also guilds in the suburbs of Aulendorf:

The castle and children's festival takes place annually on the 3rd weekend in August.

Aulendorf station in 2011 with trains from three different companies

Aulendorf's development was significantly influenced by the railway. Since the middle of the 19th century it developed into a railway town . Aulendorf station is still a railway junction of regional importance today . The Ulm – Friedrichshafen and Herbertingen – Isny ​​lines intersect in Aulendorf . On Sundays and public holidays between May and October, the "3-Löwen-Takt Radexpress Oberschwaben" runs from Aulendorf to Bad Wurzach or Pfullendorf. 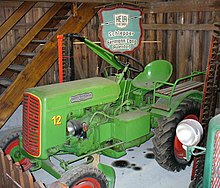 Aulendorf is in the circulation area of ​​the Schwäbische Zeitung . The monthly culture and events magazine Blix is published in Aulendorf .

The State Veterinary Investigation Office Aulendorf - Diagnostic Center , an institution of the Ministry for Rural Areas and Consumer Protection Baden-Württemberg .

The Schwaben-Therme Aulendorf , a thermal and leisure pool with relaxation area, sauna , Roman bath and wellness offers, was opened in 1994 after hot thermal water was found during drilling a few years earlier. The building has a movable domed roof that protects the thermal indoor pools below.

The Steeger See, a public outdoor pool , is a natural and moor lake.

In Aulendorf, the Ravensburg district operates a (commercial and industrial) vocational school that focuses on training for medical-technical assistants and related professions. The town of Aulendorf is supporting a primary school , a primary and junior high school and high school Aulendorf. There are nine kindergartens in the city for the youngest residents. The St. Johann Blönried preparatory college in Aulendorf-Blönried is a Catholic Free Gymnasium sponsored by the school foundation of the same name.

People who have worked in the city

Wikisource: Aulendorf in the description of the Oberamt Waldsee from 1834  - sources and full texts