Ehlscheid is a municipality in the Neuwied district in the north of Rhineland-Palatinate . It belongs to the community of Rengsdorf-Waldbreitbach .

The place is in the Rhine-Westerwald nature park , above the Neuwied basin .

Ehlscheid was first mentioned in a document in 1311.

Ehlscheid was connected to the telephone network in 1905 and to the electricity network in 1912. In 1957, with financial support from local hotels, construction of an open-air swimming pool in the Laubachtal began .

The development of the population of Ehlscheid (primary residence), the values ​​from 1871 to 1987 are based on censuses:

Ehlscheid belongs to the parish of Rengsdorf. Since the place belongs to the county of Wied , cf. Hermann V. von Wied , belonged to, the inhabitants were Protestant up to the 20th century after the Reformation due to the Augsburg Imperial and Religious Peace . From then on, a religious border separated Ehlscheid from the neighboring Kurkölnischen Kurtscheid . Not until after the Second World War did Catholics move in to a significant extent.

The municipal council of Ehlscheid consists of 16 council members, who were elected in the local elections on May 26, 2019 in a personalized proportional representation, and the honorary local mayor Ingelore Runkel as chairwoman.

Ingelore Runkel (voter group Runkel) became the local mayor of Ehlscheid on August 21, 2019. In the direct election on May 26, 2019, she was elected for five years with 78.00% of the vote. Runkel is the successor to Norbert Lück (CDU), who did not run again after ten years in office. 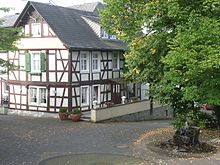