This article deals with the local church in Rhineland-Palatinate. For the chairman of the Christian woodworkers' association see Heinrich Kurtscheid . 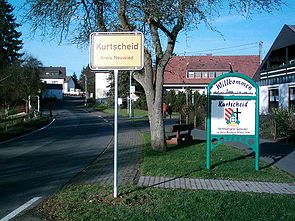 Kurtscheid is a municipality in the Neuwied district in the north of Rhineland-Palatinate . It belongs to the community of Rengsdorf-Waldbreitbach .

The place is located in the Rhine-Westerwald nature park north of Ehlscheid . With its up to almost 395  m above sea level. Coherent development reaching the NHN , Kurtscheid is the highest place in the Neuwied district.

The first documentary mention took place in 1457 as Kurtschyt . The partially named year 1314 is unsecured.

During the Reformation , Kurtscheid was exactly on the border of the territories of Count zu Wied and the Elector of Cologne . In 1556 the Count zu Wied joined the Protestant faith. While the places under his rule became Protestant as a result of the Augsburg Religious Peace , the Kurtscheiders moved their eleven houses located on Wiedi territory north to the Electoral Cologne side. From then on Kurtscheid remained Catholic and for the next centuries there was a denominational border with neighboring Ehlscheid.

The development of the population of Kurtscheid, the values ​​from 1871 to 1987 are based on censuses:

The municipal council consists of twelve council members, who were elected in a personalized proportional representation in the local elections on May 26, 2019 , and the honorary local mayor as chairman.

Ferdinand Wittlich became the local mayor of Kurtscheid on July 23, 2014. In the direct election on May 26, 2019, he was confirmed in office for a further five years with a share of 95.06% of the votes. Ferdinand Wittlich's predecessor was Heinz-Dieter Wagner, who held the office for ten years.