The place with the castle ruins of the same name

Isenburg is a municipality in the Neuwied district in Rhineland-Palatinate . It belongs to the Dierdorf Association . The town's landmark is the ruin of Isenburg Castle in the center of the village .

Isenburg is halfway between Bendorf ( Rhine ) and Dierdorf ( Westerwald ) in the Sayntal . Due to its topography, the village has an interesting location. From the heights you have a view of the historic town center. Four streams ensure certification. The highest point is the Iserkopf at 313  m above sea level. NHN . Isenburg has an officially designated access path to the Rheinsteig via the footpath to the Hausenborn church ruins .

It was first mentioned in a document from 1103. The history of the village is directly related to the Lords of Isenburg . In 1100 built Reinbold and Gerlach in the territory of a fundamental rule of the Abbey of Fulda , the Isenburg as family seat of the Lords of Isenburg. Soon after the castle was built, the first residents settled in the valley and built their houses around the castle hill. Isenburg was a part of the castle and had special rights such as the status of a private town. A city was never founded, however, the location of the place offered no room for expansion. Isenburg was fortified at the beginning of the 14th century. The fortifications, which extended over a large area around the castle and valley, not only protected the place, but also served the castle as an advance security. The fortification consisted of a wall with four gates. Two gates - the "Alte Porz" and the "Schildpforte" - as well as parts of the walling have been preserved.

With the death of Count Ernst von Isenburg-Grenzau (1584–1664) the lords of Isenburg died out. From 1666, the Counts of Walderdorff and zu Wied-Neuwied (from 1700 Wied-Runkel) became sovereigns as part of a common rule .

The population, who had previously been in the service of the Lords of Isenburg, now built up the nail forging trade as a source of income, which existed until the beginning of the 20th century. Hops were also grown in Isenburg for many years until 1917.

The council in Isenburg consists of twelve council members, who in the local elections on May 26, 2019 in a majority vote were elected, and the honorary mayor as chairman.

Detlef Mohr became the local mayor of Isenburg in July 2014. In the direct election on May 26, 2019, he was confirmed in his office for another five years with a share of the vote of 74.62%. His predecessors were Werner Schüler (2009–2014) and Dorothèe Croeff-Sudhoff (today Dorothèe Sudhoff-Mohr, first local mayor of Isenburg, term of office 1999–2009).

The ruins of the Isenburg

The Isenburg from a bird's eye view 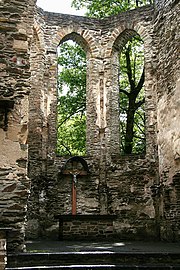 The ore mines Ludwig I and Hausenborn were located in the Isenburg village hall . The first operators of the pits, muted on April 1, 1855, were Peter Wiegel, Simon Schmengler and Wilhelm Becker from Isenburg. The last operator was Louis Schramm from Wiesbaden . Other mines in the area were the iron ore and sulfur gravel pit Carolus and in the Ginsterthal district the ore pit Mit Gott 29 , which was operated between 1856 and 1865.

Of greater importance was the extraction of slate in the pits Bertha , Constantin , Henriette , Iserthal and Marianne , which were operated in open-cast and tunnel mining in the 19th century. The Iserthal mine was the most profitable. There was an 18 meter thick layer of top quality slate. The mine was in operation from 1861 to 1922 under different owners.

At the end of the village in the direction of Kleinmaischeid there was another profitable mine. It was called Constantin and operated from 1864 to 1877. The other pits were less important.

There were nail forges in Isenburg since the second half of the 17th century , between 1870 and 1920 around 200 nailers were active. A nail smith made around 2,000 shoe nails a day. Nails were made for all areas. Some of them were sold by the manufacturers themselves in the wider area, or by the Neuwied nail agency , which bought two wagons of nails a week, as far as England.

When the first nailing machines were introduced around 1817, and the Boesner company in Augustenthal ( Neuwied ) and the Nettegut hammer mill in Miesenheim produced nails by machine, the end of the Isenburg nail smithy was recognizable. In 1923 the last nail smith gave up his trade.

After the Second World War, the nail forging trade revived. In some of the still operational nail smiths' workshops, nails were forged again; shoe nails were primarily produced. They were exchanged for bread, potatoes, butter and bacon in the neighboring agricultural villages. After the currency reform, the old handicrafts finally dried up. An original nail forge can be seen today in the Isenburg Museum of Local History.

The federal road 413 runs through the village from Bendorf to Hachenburg , via which Koblenz and Neuwied can be reached quickly. The next motorway junction is Dierdorf on the A3 .