Oberdreis is a municipality in the Neuwied district in the north of Rhineland-Palatinate . The community belongs to the Verbandsgemeinde Puderbach .

The place is a little away from the main traffic arteries northeast of Puderbach on the edge of the Rhine-Westerwald nature park .

The development of the population of Oberdreis, the values ​​from 1871 to 1987 are based on censuses:

The local council in Oberdreis consists of twelve council members, who were elected in the local elections on May 26, 2019 in a personalized proportional representation, and the honorary local mayor as chairman. The twelve seats in the municipal council are divided between two groups of voters .

Ralf Engel became local mayor of Oberdreis on August 26, 2019. Since there was no candidate in the direct election on May 26, 2019, he was elected by the local council for five years. His predecessor Dieter Klein-Ventur had held the office for 20 years.

In the center of Oberdreis there is a piston pump from the second half of the 19th century. Today it only serves as a showpiece and is no longer functional.

In the district of Oberdreis there is a Protestant church, the laying of the foundation stone could go back to around the year 1000. The first documentary mention dates back to 1253. During the Thirty Years' War it was used as a fortified church , of which between 1633 and 1634 it was used as a horse stable. The military use can still be recognized today by the elevated position and the solid walling. In 1763 the church tower collapsed, after which the church building was almost completely rebuilt in the late Baroque style between 1792 and 1795. Only the tower substructure is a witness of the old building to this day.

The church was renovated under Pastor Adam Deussen (1843–1884) and on November 16, 1845, it received its own organ. In 1900 a repairs financed by collections took place. In 1968 the church was expanded to include a chancel and the entrance was moved from the side to the tower. Another renovation followed in 2002. 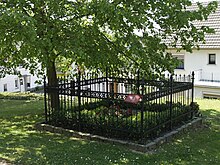 A few meters from the church is the old rectory, which was built around 1850. The Indologist Paul Deussen, born in Oberdreis in 1845, grew up there . After his death in Kiel in 1919 , he was buried on the church hill at the entrance to the church; his grave is still preserved today.

At the Mühlbach, which flows a few meters further into the Dreisbach, there is a historic oil mill in which, among other things, beechnuts from the surrounding beeches were ground. The oil mill is no longer in operation today, but thanks to its location and the traditional half-timbered construction (oak framework ) one of the Oberdreiser sights. The mill was formerly called "Owerdresser Ollichsmill" and is around 300 years old. It used to be used by the Paul Schumann family to extract oil from rape, turnip rape, beechnuts, sunflowers and linseed. The oil was used for household and stable lanterns as well as for miner's lamps. The punch-operated wedge press , the Königsstuhl and the pan mill are still completely intact. The water wheel was driven by the water of the Dreisbach. The water wheel then drove the pan mill; There the grist was crushed, then heated in an oven and finally pressed out by a wedge press. Six pounds of oil crops turned into one liter of oil. One operation (whipping) processed 60 pounds of grist. The resulting oil cake (spent grains ) could be used as fodder. When it was shut down, the building began to deteriorate. Later the owner restored it. In 1980 the roof and interior were restored, and three years later a new metal waterwheel was built. In addition, the kennel at the water wheel was renewed several times in order to preserve the sight.

Next to the former fire station is the so-called "Backes," a bakery in framework construction . Every two weeks, bread for personal use is baked on a sourdough basis in the traditional way . To do this, the stone oven is first heated by a wood fire, then the embers are removed and the bread is baked on the hot stone.

See also the list of cultural monuments in Oberdreis

A specially signposted “Rund um Oberdreis” cycle path leads around 14 kilometers through the districts and also leads to the two districts of Altenkirchen and the Westerwaldkreis . 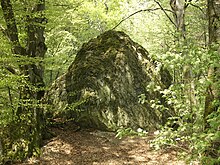 Beilstein in the Oberdreiser Forest

The Beilstein in Oberdreis is one of the most important and venerable natural monuments in the Neuwied district. A few years ago basalt was still quarried on the north side of the volcanic cone . Today the Beilstein is no longer directly connected to the road network, but is a few meters away. While it is easy to climb from one side, you can rappel on the opposite side. 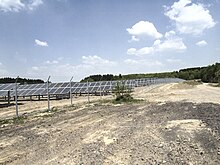 Photovoltaic system in the Oberdreis forest

The municipality Oberdreis is at a 5.6 since 2011 hectare large photovoltaic system involved. This was built from 2010 in the Oberdreiser community forest on the backfilled area of ​​the landfill operated by the local community and has a peak output of around 3 megawatts . The community share is around 700 kW peak , which roughly corresponds to the electricity consumption of 170 households.