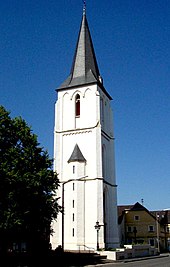 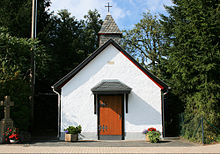 Buchholz (Westerwald) is a municipality in the Neuwied district in Rhineland-Palatinate . It belongs to the Asbach community .

Buchholz is located in the far north of Rhineland-Palatinate on the border with North Rhine-Westphalia . The community is located on the edge of the Westerwald . The federal highway 8 runs north of Buchholz . An eastern part of the Eudenbach glider airfield is on the territory of the municipality.

The highest point of the local community is the Steiner Berg near Kölsch-Büllesbach with a height of 283 m. The Steiner Berg is a wooded volcanic elevation from which basalt was mined. There is a crater lake in the middle of the mountain. The Hanfbach rises not far from Buchholz . The Lökestein , an old boundary stone and natural monument, is located on the border with the neighboring Königswinter district of Eudenbach .

Early mentions of Buchholz can be found under the names "Bouhols" (1590), "Crütz zu Buchols" (1591), "Boichholts" (1592), "tzo Bucholtz" (1596). In the 17th century Buchholz was usually only mentioned in connection with and after the "Chapel of Saint Cross Buchholz". In the dispute about the new construction of the Oberscheider oil mill from 1671 for Buchholz, the term “zú Krutz” and later “Creutz-Capellen zu Buchholz” (1718) can be found. At that time, Buchholz consisted of no more than a chapel and a house. Even the first known chaplain (1654–1660) came from Solscheid, a directly adjacent residential area.

After the Thirty Years War, Buchholz was only inhabited by one family. Two other families can be traced back to Buchholz. One lived in the Barrig, a now defunct farm west of Buchholz, and the other in Irmeroth. It can be assumed that all three families are related to one another, the common roots of which can be found in an early headquarters in Buchholz. Each of these families can be described as wealthy and influential in their time.

Buchholz developed into a village at the beginning of the 18th century. The population grew steadily and with it the desire for independence. With the instruction of the Archbishop of Cologne Maximilian Franz on June 13, 1787, Buchholz was appointed an independent pastoral care district. In addition to the enlargement of the chapel building, a school has now been set up in Buchholz for the first time. The office of schoolmaster was taken over by Hermann Josef Ditscheid, the father of the first pastor of Buchholz, Johann Hermann Josef Ditscheid. Because as early as July 10, 1835, Buchholz was elevated to the status of an independent parish by the Archdiocese of Cologne with all rights and obligations. With this last step in detachment from Asbach, the new parish of Buchholz became the residential areas and localities of Buchholz, Büllesbach, Dammig, Diepenseifen, Griesenbach, Hähntchen, Hammelshahn, Heck, Irmeroth, Jungeroth, Krautscheid, Krautscheider Mühle, Krummenast, Mendt, Muß, Neichen, Oberelles, Oberscheid, Priesterberg, Sauerwies, Schellberg, Seifen, Steinen, Wahl, Wallau, Wallroth, Wertbruch, Übersehns and Unterelles.

With 1,800 parishioners in 1859, the old chapel was far too small and so on June 12, 1862 the foundation stone for a new parish church was laid. A hundred years later, however, the church had to be demolished again, as Buchholz sand was used in the construction and the church was in great danger of collapsing. The demolition work began on June 11, 1971 and the laying of the foundation stone for the new church was celebrated on October 24, 1971, the consecration on July 28, 1973, the eve of the Pantaleon fair.

To the west of Buchholz at what is now Landesstraße 274, the Buchholz camp of the neighboring Eudenbach operational (air) port was built on the Mußer Heide (also Musser Heide ) in the late 1930s . It served as an accommodation warehouse and had farm buildings. After the Second World War the camp was closed.

Elsaff was first mentioned in a document in 893 under the name "de Elsaffe". In the Prümer Urbar it is reported that the Lords of Ütgenbach now hold the property of the Prüm Abbey in Elsaff as a fief . In the middle of the 15th century the manorial rights of the von Ütgenbach went to the lords of Nesselrode . Possibly the Prüm property can be traced back to an old imperial estate and to the year 790 , when Charlemagne bequeathed goods in Engersgau to the abbey .

Even St. Pantaleon in Cologne had estates in the Elsaff. In a document dated May 24, 1364, lands are named "in villa Eylsaffen et en parochia Aspach". The St. Pantaleon property registers do not provide any further information about the administration of these lands. Judging from an extensive and detailed description, Elsaff was roughly where the villages of Unterelles and Oberelles are today.

"Irmendenroth" was in 1064 by the Cologne Archbishop Anno II. The Abbey Siegburg , whose founder he was given. This possession was confirmed to the abbey in 1109 by Pope Paschal II . It is unknown where the property came from, it could be an old property of the Archbishopric of Cologne or goods from the hands of the counts of the Palatinate. Some of these properties in and around Irmeroth are later (1567) called Irmerother fiefs.

In 1796 there was a field camp of the French army during the Revolutionary War , from which the battle of Kircheib began , in Jungeoth, in what is now Buchholz's territory .

Buchholz used to be connected to the rail network by the Bröltalbahn .

The municipal council in Buchholz consists of 20 council members, who were elected in a personalized proportional representation in the local elections on May 26, 2019 , and the honorary local mayor as chairman.