The title of this article is ambiguous. For further meanings see Windhagen (disambiguation) . 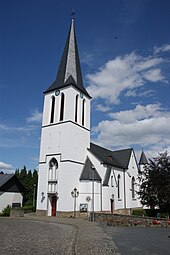 Windhagen is a municipality in the Neuwied district in northern Rhineland-Palatinate and is located directly on the border with North Rhine-Westphalia . It belongs to the Asbach community .

Neighboring communities of Windhagen are Bad Honnef (North Rhine-Westphalia) with the municipality of Aegidienberg in the northwest, Asbach in the northeast, Neustadt (Wied) in the southeast, Vettelschoss in the southwest and Erpel , Unkel and Rheinbreitbach in the west. The closest larger cities are Neuwied , Bonn and Siegburg , each about 30 km away.

According to a manuscript from 1613, a lordship "Wintsan" was mentioned in a deed of donation in the 7th century , which is identified with Windhagen. The place is probably of Celtic origin, in the Franconian times it was on the border of Engersgau , Bonngau and Auelgau . The Gau borders were generally marked by a forest, the so-called "Wendehagen", where the Germanic tribes had to "turn around" (turn around). The dialectal name of the place is "Wänte" or "Wänten", the upper of the district Windhagen "Honneböschel" and the district low Windhagen "Niddichwänte (n)".

The rule of Kurköln ended in 1803 after more than 500 years with the Reichsdeputationshauptschluss . The Electorate of Cologne area in this region was initially the Wied-Runkel assigned and came in 1806 due to the Act of Confederation, the Duchy of Nassau . The parish of Windhagen with the honnships Windhagen and Rederscheid was then under the administration of the Nassau office of Altenwied . After the treaties concluded at the Congress of Vienna , the area was ceded to the Kingdom of Prussia in 1815 .

The Honschaft Windhagen belonged from 1816 to the then newly formed civil registry district Neuwied (from 1848 district Neuwied ) in the administrative district of Koblenz and was initially administered from 1817 to 1823 by the mayor's office Altenwied , then by the mayor's office Asbach (from 1927 “Amt Asbach”). In 1845 the name was changed to "Gemeinde Windhagen". Extensive population growth began in the 1960s, with Windhagen's population quadrupling. From 1984 to 1988, a new culture, school and sports center for the community was built south of the motorway.

The development of the population of Windhagen in relation to today's municipal area, the values ​​from 1871 to 1987 are based on censuses:

The local council in Windhagen consists of 20 council members, who were elected in a personalized proportional representation in the local elections on May 26, 2019 , and the honorary local mayor as chairman.

Martin Buchholz (CDU) became the local mayor of Windhagen in June 2019. In the direct election on May 26, 2019, he was elected for five years with 51.45% of the vote. His predecessor Josef Rüddel (also CDU) had held this office since 1963, making him the longest-serving and oldest mayor in Germany.

Since May 13th 1986 the local community Windhagen is entitled to use a coat of arms.

Windhagen has had a partnership with the Pfaffschwende municipality in Thuringia since October 3, 1991 . Regular meetings and events are held by both communities to strengthen this partnership.

Junction 34 ( Bad Honnef / Linz ) of the federal motorway 3 is about three kilometers away from the center of Windhagen . The Hambitz rest area of ​​the A3 is located in the municipality of Windhagen .

Windhagen is connected to the local public transport system via bus lines and via collective call taxi (AST), which means that the administrative location of Asbach and the city of Bad Honnef (with train station ) can be reached.

The high-speed line Cologne – Rhine / Main runs through the municipality .

Windhagen is the seat of the mechanical engineering company Wirtgen , which with around 1,400 employees is one of the world's leading companies for the development, manufacture and sale of machines and systems for road construction. In 2017, the Wirtgen Group became the property of the US company John Deere.

The larger companies based in the municipality also include Nölken Hygiene-Products, JK-Ergoline and Geutebrück. In addition, there are numerous small and medium-sized companies in the areas of trade, services, production and wellness.

The trade association "Initiative to strengthen the region around Windhagen", which has been based in Windhagen since 2005, unites numerous companies from the entire region and organizes a trade show every two years with over 100 exhibitors and well over 10,000 visitors.

In addition to a community center with event rooms, the modern "Forum Windhagen" offers space for larger events.

The sporting facilities include a new three-field sports hall and the grass sports field, which was newly renovated in 2014.

Windhagen has a primary school with a single-field sports hall, two day-care centers as well as a youth club and numerous playgrounds in the respective villages.