The Namedyer Werth has been a peninsula on the left bank of the Rhine on the Middle Rhine since around 1857 . It is located east of Namedy , a district of Andernach in the Rhineland-Palatinate district of Mayen-Koblenz . The island is about 60  m above sea level. NHN between river kilometers 614 and 616.6 and is approximately 21  hectares in size; the former island stretched between kilometers 614.6 and 616.3 (1850).

The Namedyer Werth with the Andernach geyser

The island was first mentioned in 859 when the kings Charles II the Bald , Ludwig II the German and Lothar II met on the then nameless island. The first name was given as a pasture on the Rhine island uff dem haben ( mnd.  = On the island) in 1529, in the same year the name Grasswert ( mhd. Value = island). In the Middle Rhine area between Hersel and Lorch all names of the Rhine islands end in -werth such as Nonnenwerth , Hammersteiner Werth, Weissenthurmer Werth, Graswerth , Niederwerth . This term can also be found in other sections of the Rhine, including the variant "Wörth" such as Rabenwörth. After frequent changes of name after the owners of the island, the name was first used in 1653 under the Namedier Wert , in 1765 Namedyer Wert . It was covered with a forest of walnuts , which is said to have been the most beautiful on the Rhine. The shallow arm of the Rhine at the bank was an important spawning source for fish. Due to the catastrophic ice drift and the huge flood of February 27, 1784 ( 13.55 m at the Cologne gauge , for comparison: 1994/1995 10.69 m) after the extreme winter of 1783/84 , the forest was destroyed by the ice floes that remained Roots removed later and the island converted into a pure pasture and grassland. During subsequent floods, the soil was therefore often washed away.

In 1789 the name Namedyer Insel appeared. Before that, between 1770 and 1775, it was called Schlierswert / Schlirswerth , also (Auf dem) Sohlers Wert , possibly named after the then owner E. A. von Sohler , Elector of Trier court councilor . From 1800 it was called Meesen-Wert , Moesenwerth , Meesische Au , Meisen-Werth , also Meissenwerth, after the new owner of Mees from Leutesdorf . In 1806 the names Crum Werth , Krummes Wert (h) , Krummenwerth , also Krummetwerth (after Krummet = grass cuttings) appear for the first time , in 1826 called Das Krumme Werth . The name referred to its curvature, which exactly followed the left bank line. In 1816 Jacob Rech built a river water mill on the Werth, which was later converted into an inn. In the course of the 19th century trees settled again. Around 1857, in the course of the great straightening of the Rhine (Rhine regulation), the island was connected to the "mainland", making Namedyer Werth a peninsula. There was also a spelling Namedyer Wörth at the beginning of the 20th century. 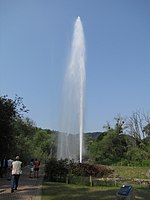 Since 1985 the Namedyer Werth has been designated as a nature reserve Namedyer Werth ( CDDA no. 164752; 15.47  hectares in size) following a proposal from 1937 . The protection purpose is the preservation of the alluvial forest as a location and habitat for rare plant and animal species that are threatened in their existence, especially as a resting and breeding area for threatened birds.

The Andernach geyser (initially called Namedyer Sprudel ) has been jumping on the peninsula since 1903 , with a maximum jump height of around 60 m, the world's highest cold water geyser . It was in operation until 1957, when it was shut down due to technical problems. Since July 7, 2006, it has been allowed to jump again after drilling again.

Today, Namedyer Werth is no longer an actual (half) island, but rather a headland on the banks of the Rhine, a little further down the Rhine from Andernach. The federal road 9 , which is led on a slope bridge over the peninsula, extends over the entire length of the nature reserve . The Deutsche Bahn railway line on the left bank of the Rhine and the Kölner Straße in the city of Andernach run along the former bank of the island on the south to west edge of the protected area . Because of the traffic arteries running on both sides, the noise from road and rail traffic is great. In dry summers it can happen that the shallow water arm that makes the Namedyer Werth a peninsula lies partly or completely dry.

Islands in the Middle Rhine

Nature reserves in the Mayen-Koblenz district