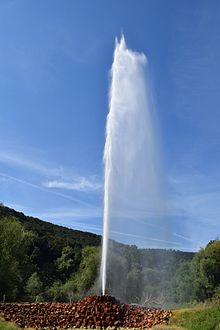 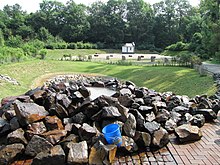 The area around the Andernach geyser, the borehole in the foreground 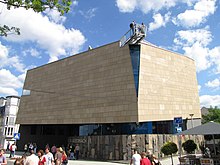 The Andernach geyser (originally: Namedyer Sprudel ) is the highest cold water geyser on earth with an ejection height of around 50 to 60 meters . It is located on the Namedyer Werth , a peninsula in the Rhine near Andernach in the Rhineland-Palatinate district of Mayen-Koblenz and was first drilled in 1903.

An eruption of the geyser lasts about eight minutes, the interval between two eruptions about two hours. It is powered by natural carbon dioxide gas, like in a shaken mineral water bottle. The geyser has been open to tourism since 2006 and is one of the attractions in the volcano park and part of the national geopark Laacher See . Near the banks of the Rhine, 2.1 km southeast of the geyser in Andernach, is the Geysir Andernach adventure center ( ⊙ ), which explains how the geyser works, among other things. There is a boat connection from the pier there to the pier at Namedyer Werth . The geyser is one of the 15  masterpieces between the Rhine and Moselle . 50.441138888889 7.4026388888889

In 1903, on the Namedy Peninsula, a 343-meter-deep borehole was supposed to open up carbonic acid deposits for the production of carbon dioxide for mineral water . The reason for drilling at this point was that bubbles could be seen rising in the water of the old arm of the Rhine. The cold water geyser became eruptive for the first time and jumped to a height of 40 meters. The Namedyer Sprudel , as it was at the time and that of the bottled mineral water that is emitted by carbon dioxide bubbles, was used commercially and soon also for tourism. For years the high fountain was a landmark of Namedyer Werthes. The plant suffered considerable damage over the years and was decommissioned in 1957. In the course of expanding federal highway 9 , the borehole was closed with a valve in 1967. Since the late 1990s, efforts have been made to reactivate the geyser as a tourist attraction, which collided with the strict nature conservation requirements that the area has been subject to since 1985.

In 1990 the peninsula became the property of the city of Andernach. In 2001, the gas-permeable rock was drilled at a new location a little away from the road. With the first drilling, the water of the geyser jumped back to a height of 40 meters. After that, the borehole received a gate valve again . The Bund für Umwelt und Naturschutz Deutschland (BUND) led a legal dispute before the Higher Administrative Court of Rhineland-Palatinate to prevent the further expansion and tourist use of the geyser within the Namedyer Werth nature reserve . In May 2005, the city of Andernach and the BUND reached an out-of-court agreement that the geyser may jump again under nature conservation requirements and that it may also be used for tourism.

The water of the geyser comes from a 350 meter deep borehole. Since July 7th 2006 the geyser has been jumping regularly again. Outside the viewing hours, it is closed with a slide for safety.

Until 2008, access to the nature reserve was only possible on a few guided and previously booked boat tours on a few weekends during the summer season. The complete tourist development took place with the opening of the adventure center Geysir Andernach on May 29, 2009 with a trip to the Geysir on the passenger and ferry ship Namedy . The ship received its name during the celebrations by naming the ship. In the adventure center, the natural phenomenon is explained playfully to the visitors. The visit is usually possible from the end of March to the end of October.

On November 9, 2008, the Andernach geyser was officially entered in the Guinness Book of Records as the highest cold water geyser in the world.

According to the scientific director of the Geysir Andernach Adventure Center , Ralf Schunk, around 115,000 visitors came to the Geysir from January to October 2013.

The volcanic past of the Eifel has resulted in numerous geological faults, i.e. fractures in the rock that allow carbon dioxide to rise from deeper layers. The CO 2 comes from magma chambers in the depths of the rock that used to feed volcanoes, but are still limited in activity today. In passive volcanic areas such as the Vulkaneifel there are therefore often sources of carbon dioxide (CO 2 ) on the earth's surface , so-called mofettes , which enable phenomena such as cold water geysers. In the Vulkaneifel there is another, albeit considerably smaller, cold water geyser, the Wallender Born geyser.

A prerequisite for the cold water geyser in Andernach is an ascent channel in the form of a 350-meter-deep borehole, into which CO 2 -saturated groundwater flows. The geyser ( isl. Geysa  = swirl, flow) is operated as a jet- like geyser, that is, the artificial chimney ends in the air and not under the surface of a pond. The borehole slowly fills with water to the top. The weight of the water creates a pressure of 35 bar at the lower end  . In the ascending, CO 2 -saturated water hospitable the CO 2 , since the upward pressure decreases toward. The rising gas bubbles expand. As groundwater continues to flow in and the volume of the gas bubbles expands, the water is displaced and the borehole overflows at the top. This reduces the pressure and the solubility of the CO 2 in the water decreases, so that even more CO 2 bubbles can form and expand. The borehole overflows more and more. There is an avalanche effect that accelerates rapidly. When the gas bubbles fill the entire borehole, they can only expand upwards. The entire water column is carried out, the geyser jumps. The duration of the eruption of the geyser is almost exactly eight minutes and reaches a height of about 60 meters when there is no wind. The borehole then slowly fills with groundwater and the process starts again after about two hours.

The Andernach Geyser works in a similar way to a mineral water bottle that is shaken and then opened. The well-known hot water geysers, for example in Iceland or Yellowstone National Park , erupt boiling hot water mixed with water vapor. In this process, groundwater in the ground is heated by magma and pushed up through a naturally created eruption channel.

Stations of the volcano park