The Eppelsberg near Nickenich is a typical cinder cone volcano of the Eastern Eifel, which was active about 230,000 years ago. The deposits from which the Eppelsberg is built come from five eruption phases. The volcano is in active dismantling, which means that the individual layers of deposits are visible and a wall up to 70 meters high has been exposed.

A dismantling wall of the Eppelsberg, in the right third of the picture a lava tunnel is visible

Approx. 230,000 years ago, magma and water met close below the earth's surface and triggered a huge water vapor explosion. The magma was shattered together with the surrounding basement and ejected vertically in an eruption column. At the same time, glowing clouds of ground escaped. A maar was created. It consisted of a deep crater surrounded by a mighty wall of loose rock. In the deeper parts of the quarry, the wall can still be seen in the form of brown, horizontally layered deposits. This was followed by a longer volcanic dormant phase, probably lasting several decades. The crater filled with water and vegetation grew.

After this period of rest there was a phreatomagmatic eruption , a second maar eruption . This led to light deposits, a narrow tuff ring. The leaf prints and knotholes contained therein testify to the vegetation of that time.

The main eruption phase followed, in which the actual cinder cone of the Eppelsberg volcano was formed. The water dried up and gas-rich magma could rise unhindered to the surface of the earth. The dissolved gases it contained expanded near the surface of the earth and led to an explosive eruption, a magmatic eruption: the gas bubbles burst and hurled the torn magma out of the chimney in lava fragments and fountains. In the air they froze to lava slag and gradually built up the mighty cinder wall of the volcano.

After another short period of rest of several days to weeks, there were further eruption intervals. The so-called "black band" or "lapilli band" was created, a deposit layer made up of 14 layers of fine particles of grain sizes lapilli and ash (up to 64 mm).

Above the “black band” is a sequence of narrow bands of different colors, the so-called “colored layers”. These conspicuous deposits formed in the last phase of the eruption in four successive eruption intervals.

After the Eppelsberg volcano had ceased its activities, a vegetation of oak, pine and bracken developed on its slopes. The roots of the trees reached into the deposits of the "colored layers". Centuries later, volcanoes erupted again in the vicinity, the ground clouds of which destroyed and covered the vegetation. Most of the negative impressions, cavities in the tree trunks and branches have been preserved. The caves are now used for nesting by rock breeders such as jackdaws, kestrels and black redstart.

Due to the eruption of the Laacher See volcano about 12,900 years ago, the entire Eppelsberg volcano with its foreign deposits was covered by a layer of pumice.

As part of the volcano park research, the Eppelsberg volcano was examined by employees of the volcanology, archeology and history of technology (VAT) research department in Mayen, a branch of the Roman-Germanic Central Museum in Mainz. Since 2007, the i3mainz Institute for Spatial Information and Measurement Technology at the Mainz University of Applied Sciences and Guido Heinz have been measuring the cinder cone in several steps with the help of a 3D laser scanner. 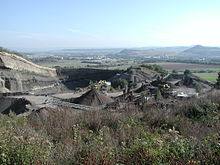 A large part of the Eppelsberg volcano has been eroded by modern stone mining. The AG für Steinindustrie has operated the quarry since the 1980s.

Grit from the western quarry area (now wooded) was used around 1975 for the construction of the A61. Nowadays the material is used in many ways. After it has been crushed in crushing plants and separated according to grain size in sieving and sorting plants, it is z. B. used in the lightweight concrete industry, in road construction and in sewage treatment plants. The environmentally friendly salt-free granulate is also used as grit on winter roads.

Stations of the volcano park