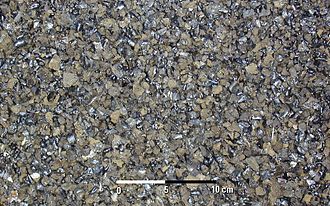 Lapilli des Puu Puai, an elevation made of erupted material from Kilauea

In volcanology, lapilli ( Italian " little stones") refer to pea- to nut-sized (2–64 mm) pyroclasts , which are produced during an explosive volcanic eruption . The lapilli together with the volcanic ashes (<2 mm), the bombs (> 64 mm, rounded, originally melted) and the volcanic blocks (> 64 mm, angular, already solid at the time of ejection) form the pyroclastic sediments (also known as tephra) called if not solidified) or the pyroclastic rocks (if solidified).

The term lapilli only describes one grain size and is not a genetic name. Lapilli can therefore consist of scraps of lava , slag , remains of old chimney fillings or xenolites . Lapilli can form pyroclastic fall or flow deposits . A pyroclastic rock that consists mainly (> 75%) of lapilli is called lapilli stone. A lapilli tuff , however, is a pyroclastic rock that contains less than 25% bombs and blocks and more than 75% lapilli and ash. Overall, however, these deposits must consist of more than 75% pyroclasts .

Accretionary lapilli are lapilli- sized agglomerations of ash fragments that are produced by phreatomagmatic explosions . They arise when ash particles accumulate around a “core”. This nucleus can e.g. B. be a solid particle, but also a drop of water. In the latter way, they arise when raindrops fall through the eruption column and ash builds up around the drops. Accretionary lapilli occur in both pyroclastic fall and pyroclastic flow deposits.