This article deals with the concept of the cloister. For inclusions in amber, see there. 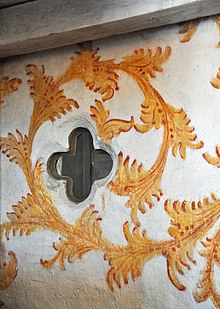 Inclusory with hagioscope in the church of Bro on Gotland

Inclusions (of Latin inclusus "Locked-in") were able to be of prayer and asceticism dominated life in a Inklusorium include. Due to their extreme aversion to the world with the aim of achieving perfection (perfectio) , inclusions enjoyed a high spiritual reputation , especially in the European Middle Ages . In their ascetic principle they correspond to the early Christian pillar saints of the Middle East.

In the Romance-speaking area , the inclusions were mostly referred to as reclusus (Latin reclusus with an identical translation). In early Christianity in Egypt no cells of inclusions are known, in Nubia only inclusions were found in Sayala .

The inclusory is a cell or a small house, which is then also called a hermitage . The inclusory should be attached to a church so that the incluse can look at the altar through a hagioscope and follow the Holy Mass as well as receive communion and confess . The glass of the window is opaque or the window is covered with a curtain so that the inclusions cannot be seen from the outside. On the opposite side there should be a second window through which the inclusion receives light, air and essentials or can keep in contact with those seeking advice. In the early days the inclusions were unheated. From the 13th and 14th centuries, the regulations were gradually relaxed: Inclusions were allowed to be heated, but in many inclusions there was no way to do so due to the way they were built.

In the past, inclusions were mostly in monasteries . Later it was also clerics or wealthy families who founded a hermitage or took care of its maintenance.