Coat of arms of the
von Geyr zu Schweppenburg

The noble court of the von Geyr family in Warburg, built between 1452 and 1455

The family, originally from the Paderborn patriciate , appears for the first time with Andreas Gyr as mayor of Paderborn. It is mentioned in a document between 1239 and 1270. The Giersstraße , the Gierswall and the Giersmauer in Paderborn are named after the family.

Gyr from Warburg to light

1288 was Johann Gyr in a Lehnbrief about at Scherfede location Good light of the monastery Hardehausen called. He was a gographer for Warburg . In 1385 another Johann Gyre was mentioned as Gograf von Warburg. 1452-1455 the family built a new residence on a large piece of land in the Warburger Neustadt, Kalandstraße 5 , which still exists today. In 1481 Dethmar Gyr was councilor in Warburg. The family also owned an estate in Menne and other lands.

In 1490 Dethmar Gyr's son Johann Geyr von Warburg zu Leuchten († 1510) was enfeoffed with the Roden near the Leuchtenberg , which at that time still belonged to the Paderborn Monastery . Conrad Geyr zu Roden († 1598), great-grandson of Johann Geyr von Warburg zu Leuchten and son of Peter Geyr and Gertrud, née Drost von Vuchte, sold the lamp estate to the von Spiegel noble family . Herbold von Geyr zu Roden († 1643) was probably the last Gograf from the family in Warburg. His son Peter von Geyr zu Roden († 1683) became general collector in the archbishopric of Cologne . Around 1670 he settled the family permanently in the Rhineland .

Rudolf Adolf von Geyr (1672–1752) was electoral Cologne court councilor , general collector and senior bailiff to heir and Brauweiler . In 1707 he acquired Müddersheim Castle , from 1714 he had the destroyed Schallmauer Castle rebuilt as a mansion, and in 1716 he bought Schweppenburg Castle . He was married to Maria von Groote († 1754). Her son Ferdinand Joseph Balthasar Freiherr von Geyr (1709–1784) zu Schweppenburg and Müddersheim, zu Andrimont , Winterburg, Ursfeld and Schallmauer , was an electoral councilor and bailiff for Erp . After his death, the family split into the Müddersheim and Schweppenburg lines. 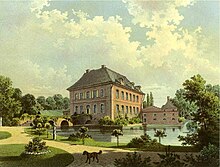 Müddersheim Castle , owned by the family since 1707

From 1803 to 2015 Arff Castle near Cologne was also owned by the family, in the middle of the 19th century also Rath House in Cologne-Merheim , the Gray Castle near Sechtem and Arenfels Castle from 1951 to 2006 . In the 1840s, the farm belonged Lengsberg and Käsbacher court , both in Odenthal located the family. Haus Vlassrath has been owned by a family member since 2006 .

Hofrat Rudolph Adolph von Geyer received the imperial knighthood as Baron von Geyer Edler zu Schweppenburg on June 9, 1717 in Laxenburg with an improvement in the coat of arms . On October 3, 1726, he was accepted into the Lower Rhine Imperial Knighthood in Koblenz and on February 21, 1743 in Frankfurt am Main, as Freiherr von Geyr Edler zu Schweppenburg, with the salutation Well-born and an improved coat of arms, he was raised to the Imperial Baron status.

A Prussian recognition of the baron status for the Müddersheim line as Baron Geyr von Schweppenburg was made by rescript on December 15, 1826 and for the Baron von Geyr zu Schweppenburg line on May 2, 1827.

The talking coat of arms shows in gold the torn off head and neck of a natural vulture . The shield figure on the helmet with black and gold helmet covers .

In 1760 an epitaph was erected in the Marienkapelle of Cologne Cathedral with inscriptions commemorating various members of the von Geyr, von Bequerer , von Plettenberg , von Kurtzrock and von Buschmann families . The epitaph is crowned by a console with the coats of arms of Geyr and von Bequerer.

The baronial coat of arms, awarded in 1743, also shows two natural vultures as a shield holder .