Junk is a redirect to this article. See also: Junk (disambiguation) . 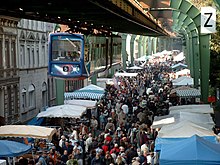 Theresienwiese 2010 at the beginning of the spring festival

Easter Monday flea market in the old town of Bartenstein

A flea market (also a flea market ) is in the original sense a market where used items are offered by private individuals for other private individuals. The flea market probably owes its name to the idea that the textiles on offer also contain fleas . In his study on the history of words and the relationship with the expression "lice market" and its older counterparts in Russian and Turkish, Wolfgang Schweickard assumes that "flea market" is not a playful modification of "lice market", but takes an independent but comparable motivation both expressions.

Originally, flea markets were mostly organized by cities and municipalities for their citizens, but social institutions or associations also act as organizers. There are now professionally organized flea markets, which mostly take place on a much smaller scale than the traditional flea markets. The sales offer consists of - often inferior - new goods and goods offered by professional sellers. Household liquidators are increasingly offering goods. The organizers of professionally organized markets primarily develop parking spaces for supermarkets , quayside streets and fallow land. Occasionally, visitors are charged entrance fees or parking fees. For sellers (as is the case with many flea markets organized by municipalities) a stand fee is due, which is often calculated according to the length of the stand set up. Sometimes their height is different in one and the same market, covered stands or those in the entrance area are then more expensive.

Today, many municipalities set framework conditions for the flea markets they organize, for example that no new goods may be offered or commercial dealers are not permitted. This is to preserve the typical flea market character, for which visitors and sellers often travel from far away. On the other hand, accompanying events are occasionally offered to increase the attractiveness.

The flea market for everything to do with children is widespread in Germany. Kindergartens, youth institutions or parishes organize such children's things flea markets , where baby equipment, children's clothing , toys and children's books are sold. These offers are used by large groups of the population to limit the expenditure for the naturally rapidly changing needs of the growing children and, on the other hand, to receive some money for items that are no longer needed.

In the case of donated flea markets , the entire proceeds either go to the non-profit organizer, e.g. a parish , or to a charitable cause as a donation . On themed flea markets , such as books, militaria, records, dolls or general toy markets , goods are traded for a specific collection area . Market and trade magazines and their websites provide information on dates and topics. The night flea market is a daily new version of the flea market, which usually takes place in closed event halls from late afternoon to night. For some night flea markets, visitors have to pay admission in order to participate in the trade. In the south and east of Germany in particular, night flea markets have been establishing themselves for a number of years, which enable a highly heterogeneous and urban public to buy and sell all kinds of junk late. In addition, there is often a supporting program, mostly food, drinks and music. The night flea market in the Kohlrabi circus has existed in Leipzig since 2000, and the night flea market Nacht Konsum has been taking place in Munich since 2007 . In Erfurt, the night flea markets in the Thuringia Hall and in the exhibition hall compete for visitors, often on consecutive Saturdays.

Occasionally, privately organized flea markets can also be found where private individuals sell items on their private property similar to the yard sales common in the USA (see below), for example as part of a household liquidation . In Syria , antiques that are mostly privately owned are mostly offered in markets that correspond to today's German flea market .

Flea markets are common around the world. There are regular flea or similar markets in numerous cities across the globe. Flea markets can also serve as a sales platform for smaller commercial traders who cannot afford a corresponding shop or whose range of goods is tailored to the target group of flea market visitors. However, professional dealers who operate a shop also sometimes use flea markets as an opportunity to address other customer groups (e.g. tourists who have come especially for the flea market) or to purchase goods for resale in the shop.

Private individuals often use flea markets to sell items that they no longer need from their own property or e.g. B. from inheritance.

Flea markets can prove to be a useful environment for contemporary history and everyday cultural education. Most flea markets have media, especially books and magazines or even sound carriers, that are not or only rarely available in stores. In addition, there are various individual antiques - even if pure antique markets have developed for them. However, at antique markets, the goods are often offered by specialized dealers, visitors usually have to pay admission and there is mostly a corresponding specialist audience there.

Another genre closely related to flea markets are markets in which only items from a special collection area (e.g. clocks, sound carriers, old toys, model trains, etc.) are sold. Here, too, entry is usually required and the sellers are also mostly professional traders. Such markets are often referred to as stock exchanges by their organizers , the dealers and visitors usually travel specifically and often over great distances, spontaneous market visitors are usually not to be found here either.

Sellers can sell things at the flea market that are no longer needed, sometimes they also sell objects they have made themselves, e.g. B. Needlework. Children can bargain and haggle and learn how to handle money and the value of their own possessions.

The special features of a flea market are - from the visitor's point of view - the private character of the trade (sale by private individuals, in many cases the price can be haggled), the non-permanent supply of goods (many flea markets, for example, only take place once a year) as well as the hope of visitors to be able to purchase something unusual or cheap. These connotations are also often used by the owners of regular shops by referring to special sales as "flea markets" in order to increase their attractiveness.

In addition to the commercial purpose, flea markets, like other markets, serve social needs. Entertainment or even political discussions take place at flea markets. Visitors have the option of simply strolling through the market to chat with other visitors or sellers. It used to be common practice in shops around the corner, but today chatting has disappeared in most shops - especially in supermarkets and metropolitan shopping centers. Small talk and everyday conversation are possible in flea markets and other markets. In many rural areas of Austria, especially at flea markets, the proceeds of which go to social or charitable institutions, there is often an additional culinary offer that is similar to that of a café or a snack stand and where there is also corresponding social activity.

There are also often conversations between salespeople or with customers who identify them as experts in certain areas. In this way, mutual understanding and - especially in cases of unusual interests - a feeling of belonging to a special small group can arise, which gives the flea market the character of a subcultural place. In particular, markets specifically geared towards a collecting area can become a meeting point for collectors who travel specifically and meet there (planned or accidentally) collectors and exchange ideas.

Visiting a flea market is usually for your own pleasure and, unlike other purchases, does not have the character of an everyday necessity. It therefore usually takes place without time pressure.

Internet auction platforms such as eBay have increased the range and opportunities for selling used goods in recent years. Such Internet auction sites meet the traditional idea of ​​a flea market insofar as the offer there enables, in addition to aimless browsing, a targeted search using search terms for special features. When trading over the Internet, however, the flair of a market is usually lost - for example, direct appraisal of the goods, communication with the retailer and with like-minded people, music and smells as well as other side effects. The advantage of the internet is that there is often no long journey and price comparisons, sometimes even internationally, are possible in a very short time. In addition, buyers and sellers are not bound by the fixed event times of flea markets.

Alternatives for disposing of used items, in addition to selling them at flea markets, are handing them over on a trade day , giving gifts to friends, donating to a charitable institution and handing them over to a recycling center , where the items are partially recycled or resold.

The aforementioned flea markets have a certain size and, above all, the special atmosphere of a certain event location in common. Since the Internet has created new forms of private buying and selling, these features are of greater importance. There are also other locations such as supermarket parking lots on Sundays. In 2011, flea markets were banned in Rhineland-Palatinate on Sundays and public holidays following a decision by the VG Koblenz . In the last few decades, commercial traders have increasingly been offering their goods on flea markets.

In the USA, yard sales (also: garage sales , rummage sales or similar) are more common than flea markets , in which private individuals offer their no longer required items at a sales stand that is set up for this purpose on their own property (usually in the garage, on the Garage driveway, in the carport or in the front yard). Unlike in Germany, private individuals in the USA can generally carry out a yard sale without official registration. Only some cities (e.g. Beverly Hills , Gettysburg ) require a paid permit. Typical items sold at yard sales include children's toys, board games, books, clothing, and household items. Haggling is widespread; many sellers don't even put a price tag on their goods. Yard sales are also in high demand from buyers. They usually take place on Saturday mornings and are announced by the respective seller either through an advertisement in the local daily newspaper or through self-made signs that are hung up in the neighborhood.

Often entire neighborhoods coordinate in order to attract a particularly large number of customers with a collective yard sale. The Highway 127 Corridor Sale along US Highway 127 is considered the "longest yard sale in the world" and is attended by thousands of households every year at the beginning of August.