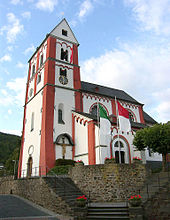 The late Romanesque parish church of St. Viktor in Oberbreisig

Bad Breisig from the north-east

Bad Breisig is a spa town and a state-approved spa in the Ahrweiler district in Rhineland-Palatinate . It is the administrative seat of the association of the same name to which the city belongs. According to state planning, Bad Breisig is designated as a basic center.

The city is located on the left bank of the Rhine on the northern Middle Rhine . It is divided into the districts of Oberbreisig, Niederbreisig and Rheineck. The Niederbreisig district also includes the residential areas Auf dem Hohe Rech, Glasfabrik, Haus Mohr, Kesselberg, Tiefpfad and Weiler; the residential areas Heiligental, Lieshof, Mönchsheide and Auf Wallers to the Oberbreisig district; to the Rheineck district, Rheineck Castle and the Rheineck Forest Estate.

The title Quellenstadt is justified by the large number of sources in Bad Breisig.

Bad Breisig is located north of the mouth of the Vinxtbach , the border brook between the two Roman provinces of Lower and Upper Germany , into the Rhine. Early traces of settlement date from the late Paleolithic as excavations of the research area Paleolithic of the Roman-Germanic Central Museum (Mainz) have shown. The name "Breisig" (Latin Brisiacum ) is of Celtic origin. Rich finds from two grave fields indicate the importance of the Oberbreisig settlement at the time of the conquest of the Franks .

A "Brismike" mentioned in a deed of donation from King Zwentibold , King of Lotharingia , to the imperial monastery of Essen under Abbess Wicburg , does not mean Breisig, but - with other villages together - an area in the area around today's Erkelenz . What is certain is that the “Breisiger Ländchen” was given to the monastery at the time of Abbess Mathilde (971-1011). The "Ländchen", to which the places Niederbreisig, Oberbreisig, Gönnersdorf , Niederlützingen , Oberlützingen , Brohl and part of Rheineck belonged, was territorially independent, but the Duke of Jülich exercised the bailiff's rights since the late Middle Ages .

A settlement of the Knights Templar is mentioned for the first time in 1215 in "Brysich" on the occasion of a donation from the Florinsstift in Koblenz . This became one of the most important comers of the order in the decades to come. In the Donatus Chapel of the Order there was a cross relic that the Templars had brought from Outremer and that is now kept in the parish church of St. Mary . With the persecution and abolition of the order from 1307 to 1312, the possessions passed into the church property, the Johanniter took over the possessions of the Templars for the next 500 years. The only thing that has been preserved is the name of a house on Koblenzer Strasse as "Templerhof".

Under the abbess Berta von Arnsberg (1241–1292) the place was fortified around 1280 with a moat and curtain wall. The first Breisig seal is attested for 1356. In 1374, Breisig received market rights from Emperor Charles IV . The parish church at that time was St. Viktor's Church in Oberbreisig.

In the autumn of 1568, Breisig was drawn into the chaos of the war of independence in the Netherlands against Spanish rule. Breisig served as a retreat for the troops of the Prince of Orange.

The Breisiger Ländchen remained with Essen and Jülich until the French revolutionary troops marched in in 1794. After the Congress of Vienna in 1815, it became Prussian .

After the Second World War, the villages that are now part of Bad Breisig came to the then newly formed state of Rhineland-Palatinate . In Niederbreisig in the summer of 1949 around 150 refugees and displaced persons who had been assigned to the state of North Rhine-Westphalia were accommodated in the Niederbreisig Rheinhotel , which had been repaired for this purpose . They worked in Bad Godesberg and had previously lived in the Rheinhotel Dreesen there , which had to be cleared for the French high commissioner .

In 1972 the planned construction of a nuclear power plant in the greater Koblenz area became known, and the Golden Mile between Bad Breisig and Sinzig was named as one of the possible locations . For reasons of drinking water protection, however, this plan had to be abandoned later, and the Mülheim-Kärlich nuclear power plant was implemented instead .

The city lives from the spa and tourism. It benefits from its location on the Rhine and its geographical proximity to Koblenz , Bonn and Cologne ; insofar it is also a popular day trip destination. The traditional spa is being transformed into a recreation center with wellness , fitness and sports facilities that meets contemporary requirements .

The development of the population of Bad Breisig in relation to today's urban area. The values ​​from 1871 to 1987 are based on censuses:

The city ​​council in Bad Breisig consists of 24 council members, who were elected in a personalized proportional representation in the local elections on May 26, 2019 , and the honorary city ​​mayor as chairman.

The parish church of St. Viktor in the Oberbreisig district was first mentioned in a document in 1041. It is the mother church of the "Breisiger Ländchen". Today's late Romanesque church was built between 1220 and 1240. Frescos from the 14th / 15th centuries. Century are preserved, the furnishings are otherwise baroque.

The baroque church of St. Marien (1717–1725) is a single-nave hall building in Gothic-style shapes with a square tower and dome.

The Protestant parish church dates from 1901.

Bad Breisig has a large number of listed buildings from the 17th century to the Wilhelminian era . The most historically significant is the Templar court ; the existing building, in which a restaurant is set up, dates from 1657, but a forerunner was mentioned in a document as early as 1215.

Rheineck Castle from the north-west 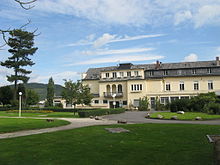 Kurhaus Bad Breisig before its demolition

The drilling of the first 34 ° C warm thermal spring (70,000 liters per hour) succeeded in April 1914 after two years of attempts by Peter Lang and his sponsor Baron Maximilian von Geyr zu Schweppenburg (named Geyrquelle after him ). The first thermal swimming pool was built near the Rhine in 1928 with the water of a second spring (Marienquelle) drilled in 1927 (Marienquelle) with a pouring rate of 200,000 liters per hour and the Kurhaus in the premises of Villa Oehme , a former rest home of the Breisig Freemasons and later the residence of a Danish Consul General, opened.

The spa park still has the historical trees of the former villa. The oldest examples are marked and explained. The Kurhaus was rebuilt and expanded in 1975.

The spa business had expanded in 1936 under the local entrepreneur Johann Martin Schuh with the construction of the Geyrsprudel spa house in place of the original small half-timbered bath house from the Weimar Republic. His son Willy built a new thermal bath in 1961 after the Marienquelle was filled in by earth shocks during the Second World War and the old bath was no longer usable (it no longer exists today). The new bath from 1961 was converted into the Römer Thermen , a wellness bath with sauna area , in December 1991 , modernized again in 2009 and given a Roman ambience.

The Kurhaus and Kurhotel were insolvent in 2005 and had to be closed. In January 2011, the historic Kurhaus was demolished after the city rejected its renovation as unprofitable. The extension from 1975 was sold and is to be given a new use (condominiums, café and tourist information office).

The following festivals take place every year in Bad Breisig:

Cities and municipalities in the Ahrweiler district