View of the facade with the logo

The Fair Nuremberg (according to its own spelling NürnbergMesse ) is an exhibition center in Nuremberg district Langwasser currently has 16 halls and 180,000 square meters of gross exhibition space and 50,000 m² outdoor area. The associated NürnbergConvention Center , NCC , has 50 congress halls and rooms with a total capacity for over 12,800 participants.

The fair is operated by the NürnbergMesse Group , which has further subsidiaries in China, North America, Brazil, Italy and India. The range of events includes a total of around 120 national and international trade fairs and congresses as well as around 40 sponsored company pavilions at the Nuremberg location and worldwide. Every year around 35,000 exhibitors and up to 1.5 million visitors take part in the company's own, partner and guest events. The share of international exhibitors at their own events is 44 percent, the internationality of trade visitors is 26 percent. The company has around 50 agencies worldwide that are active in over 100 countries. 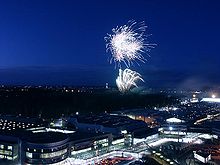 In 1974, the Nuremberg Exhibition Center began at the new location in Langwasser with around 60,000 m² of hall space, after there were no more options for expansion at the previous location at Berliner Platz in the north of Nuremberg near the city ​​park . By 2014 the exhibition center had been expanded to around 170,000 m² of exhibition space. The site extends over 15 exhibition halls, including a multi-purpose hall, which are grouped around the central exhibition park. It can be subdivided into individual segments and consists mainly of ground-level exhibition areas. The logistical separation of the two areas of visitors and exhibitors was taken into account in the planning.

On April 16, 2005, after a three-year construction period and with an investment volume of 60 million euros, a new congress center with the name CongressCenter Nürnberg Ost (CCN Ost) was inaugurated. In the six-storey building, all of the congress rooms have daylight and are accessible via an auditorium. It was designed by the Nuremberg architects S + P Heinz Seipel Gesellschaft von Architekten mbH. When the NürnbergConvention umbrella brand was founded by NürnbergMesse and the Nuremberg Congress and Tourism Center (CTZ), the convention center was renamed the NürnbergConvention Center (NCC).

The new Hall 3A was opened for the 2014 Spielwarenmesse . In 2018 , the new Hall 3C was also completed, also based on a design by Zaha Hadid Architects, which increases the exhibition grounds to 180,000 m².

The trade fair company is a member of the Association of Large-Scale German Trade Fairs . V. and ranked 5th in Germany in terms of sales behind Messe Frankfurt , Messe München , Messe Berlin and KölnMesse .

Your focus is on the organization of highly specialized trade fairs in niche topics.

The portfolio comprises around 120 national and international trade fairs and congresses in Nuremberg and around the world, including:

From the 2000s, NürnbergMesse has continuously expanded its congress area. Construction and expansion projects included the establishment of the NCC Ost congress center (investment volume of around 60 million euros, opening in April 2005) and the construction of the new daylight hall 4A with a total of 7,000 m² (investment volume of 16 million euros, commissioning in February 2007) .

NürnbergMesse celebrated the opening of the latest NCC Mitte / West building project in September 2010. The forecourt is now spanned by a 12,500 m² air-cushion louvre roof. The newly designed Brussels Congress Hall rests on five pillars, doubling the space in the entrance area to 6,000 m². The total costs for these construction measures amounted to around 40 million euros. Furthermore, the new Hall 3A was completed for the toy fair in February 2014. The London architecture firm Zaha Hadid Architects planned the over 9,000 m² hall, the construction costs and infrastructure of which amount to an investment of 37 million euros. After around 18 months of construction, the new Hall 3C was also completed in autumn 2018. The almost 10,000 m² Hall 3C, including infrastructure measures and taxes, represents NürnbergMesse's largest single investment to date with around 70 million euros.