This article is about the church. See also: Christian Ludwig Hartmann von Landwüst .

Landwüst is a district of the town of Markneukirchen in the Vogtlandkreis (Free State of Saxony ). The incorporation took place on January 1, 1999.

The meaning of the name is interpreted in the historical place-name book of Saxony as “settlement in the state of Saxony, on the state border”, “in a desolate or in an area characterized by numerous desert areas”. Around 1350 the place was surrounded by six desert areas (Tockengrün, Rohrbach , Wernitzgrün , Schönlind , Heide and Winthersreuth).

Overall view from the direction of Sträßl

The Waldhufendorf Landwüst is located in the south of the Saxon part of the historical Vogtland or Upper Vogtland , on the northwest slope of the Wirtsberg (664 m) in the Elster Mountains at an altitude between 570 m and 640 m. The border with the Czech Republic is only two kilometers from the desert in the southeast. Former districts, now deserts , are Tockengrün and Winthersreuth .

Neighboring towns in the northwest are Schönlind, which also belongs to Markneukirchen , and Wernitzgrün to the northeast . In the south, Bad Brambach borders on Landwüst with the two districts Rohrbach and Hennebach . To the west lies the sparsely populated valley of the Rauner Bach, through which the federal road 92 leads from Adorf to the Czech border crossing Vojtanov / Schönberg.

The place was first mentioned as "Lantwste" in 1319, in 1542 the name "Landtwuest" appeared. The noble lords of Landwüst were first mentioned in a document with Bernhard Hermann von Landwüst in 1325. The former manor was abandoned early, in the middle of the fifteenth century the von Landwüsts disappeared from the Vogtland. In the following years the place was divided into different manors.

Located on the old road from Adorf to Eger , rural desert was often affected by the negative consequences of warlike events. In 1385 Franconian feudal lords ravaged the place with murder and pillage. Meißnian mercenaries occupied the desert in the 15th century in order to "beat up" the border villages from here and to build entrenchments . In the Thirty Years' War which demanded plague many victims. During the Peasant War in 1525, the desert was the focus of the uprising in the Upper Vogtland.

Landwüst belonged to the Electoral Saxon or Royal Saxon Office of Voigtsberg until 1856 , to the Markneukirchen court office after 1856 and to the Oelsnitz administration from 1875 . As a result of the second district reform in the GDR , the municipality of Landwüst first became part of the Oelsnitz district in July 1952 , but in December 1952 it was incorporated into the Klingenthal district in the Chemnitz district (renamed the Karl-Marx-Stadt district in 1953 ), which became the Saxon district in 1990 Klingenthal was continued and in 1996 in the Vogtlandkreis.

On January 1, 1999, Landwüst became a district of Markneukirchen by law.

Lookout tower and triangulation column on the Wirtsberg near Landwüst 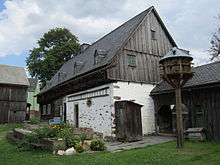 Pigeon house and stable house in the Vogtland open-air museum