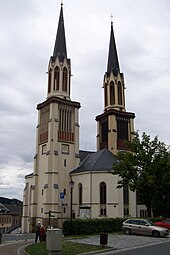 Towers of the Jakobikirche in the cityscape

The Jakobikirche in Oelsnitz was first mentioned in a document in 1227. Today's building is an asymmetrical hall church, which is located in the east corner of the old town, which was previously walled. The oldest parts are the substructures of the two towers, which probably date from the 13th century. The foundation walls and the crypt were built in 1340. The main parts of today's building, however, come from a fundamental redesign in the years 1488 to 1588. Further reconstructions after fires took place in 1634 and 1720. The last major redesign in the neo-Gothic style took place after the town fire of 1859. In 1867 / In 68 the later simplified neo-Gothic tower structures with a height of 73.5 m were built. In 1888, a profound change in the exterior was made by Carl August Schramm . After that, the interior was refurbished by Julius Zeißig until 1904 . In 1962 an interior restoration was carried out with a restoration of the colored version from 1634. From 1984 to 1986 parts of the north tower were improperly renewed using concrete. Extensive restorations of the exterior have been carried out in the years since 1991.

The church is a plastered quarry stone building with drawn in buttresses and steep slate roofs. The almost square hall church is equipped with a transept and a choir with a polygonal end. In the corners between the choir and transept, the towers are arranged with a square floor plan in the basement, above which the neo-Gothic octagonal bell-shaped storeys with pointed spiers rise. Pointed arch windows illuminate the two-aisled interior of the hall with a raised choir. The star vault with baroque hanging stones is supported by slender octagonal pillars. The spatial impression is shaped by the gallery, which surrounds the main nave via flat arches and continues into the choir. Under the gallery of the south transept is a richly designed stitch cap vault in the shape of a star with plastered ridges.

The essential parts of the furnishings belong to the neo-Gothic style. The altar with a painted representation of the meal in Emmaus was created in 1888. At the same time, the pulpit, resting on a column with a bud capital, was created with carved depictions of the evangelists on the pulpit. The classical font is a work by Ernst Rietschel from 1833. Colored glass paintings show the birth of Christ, the Ascension and the Whitsun miracle. In the sacristy there are two windows with the representations of Luther and Melanchthon .

In the first northern nave yoke, paintings of the former baroque altar with a depiction of the crucifixion by the painter Christoph Langer from Eger from 1770 have been preserved. In the southern nave there are draft drawings of the former altar and an altarpiece depicting the Entombment of Christ from the 18th century. A life-size crucifix dated 1515 comes from the Katharinenkirche. Three late Gothic apostle figures from the beginning of the 16th century come from Posseck in the Vogtland district . A full-length portrait of the so-called Brandmeier from around 1720 has been preserved under the gallery . A large-format painting depicting the return of the prodigal son in the style of Rembrandt from the 19th century is kept under the southern gallery .

The organ is a work by Jehmlich from 1930 using part of the pipework from Christian Gottlob Steinmüller's predecessor organ from 1841/42. With 65 stops on three manuals and a pedal , it is the largest organ in the Vogtland. It was restored in 2005 by the Thomas Jann company and provided with a new setter combination . The church bell consists of four bells. Finally, two ornamental grave monuments for D. Engelschall († 1665) and G. Dzierzanowski († 1747) should be mentioned.

The ringing consists of two chill-cast iron bells and two bronze bells , the bell cage is made of oak and three bell yokes are made of steel or cast iron and one is made of oak. Below is a data overview of the bell: