The post horn is a horn-shaped, circularly curved, high brass instrument made of brass with a bright, penetrating sound for generating acoustic signals . As a natural horn , it can only be used to produce the notes of the natural series . 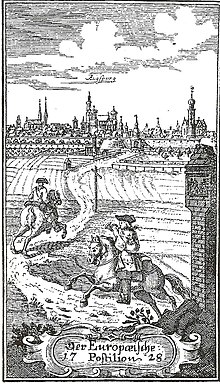 Postreiter as ambassador for the Peace of Westphalia in 1648

The Prussian Post introduced these various signals as early as 1828

Long before there was an organized post office, the horn was used as a signaling instrument in the early Middle Ages. Before leaving to buy cattle, butchers blew animal horns that came from slaughtered cattle. In doing so, they signaled that they were ready to take letters with them on their journeys (see also: Metzgerpost ).

The first metal horns were made in the early 15th century. Since the 16th century, the mail riders and, since the introduction of the stagecoach in the 17th century, the postillons carried such a horn with them, with which they announced the departure and arrival of the post. This was taken over by the Habsburg Post, operated by the Taxis family , and what later became the Imperial Imperial Post . The Taxis family achieved privileges for blowing the post horn , as well as for all mail delivery. In 1507 they were granted sole use of the post horn, from which a trademark developed. Postillons did not have to pay a road toll .

On the way, the postillon, as the driver of the stagecoach, used the post horn (similar to today's car drivers the horn) to warn other road users of the approaching carriage or to ask them to make room, since the stagecoach had priority. The opening of the city gates and the announcement of the need to switch horses on the relay stations were also announced with different signal melodies before arrival. These usually consisted of the 3rd, 4th, 5th and 6th natural tones.

Anyone who blew a post horn as a traveler, businessman or ordinary messenger had to pay a fine of twelve talers in accordance with the General Prussian Postal Code or, in special cases, risked a corporal punishment . In the 18th century, instruments with up to three windings and several openings came into use instead of the simple horn. A postilion who did not master the signals was threatened with dismissal, while an outstanding wind player could be rewarded with an honorary post horn. In the German kingdoms of Saxony and Prussia , between 1828 and 1870, military post trumpets based on the model of the signal trumpets of the cavalry in D and E flat tuning were used, and only afterwards post horns were used again by the postilons.

In Switzerland you can still hear the classic triad tone when the yellow Postbuses drive through tight and confusing curves. The sound then often echoes for miles through the valleys and arouses something sentimental in some. Every Swiss woman knows the song tü-ta-tooo-poschtautooo . The motif comes from the Andante of the overture to Rossini's Wilhelm Tell and uses the 5th, 3rd and 4th natural tones in succession.

In the Austrian Motor Vehicle Act 1967 , the regulation still exists today that buses of the postal and telegraph administration may have a special secondary tone horn :

"Devices for issuing warning signs with the tone sequence of the post horn (a-fis-ad) may be attached to buses that are intended for use in the field of postal and telegraph administration."

Since ÖBB-Postbus GmbH is legally the successor company, this regulation still applies today. Some buses are still equipped with the following tone horn. On some mountain lines, the following tone horn is also used regularly to alert the oncoming vehicles acoustically to the Postbus in narrow, confusing areas.

The post horn is still a symbol of mail and parcel delivery today.

In the change of time

As early as 1713, the geographer Johann Gottfried Gregorii recommended the uniform use of the post horn as a signature for marking post stations on maps in a theoretical basic work on cartography .

Many postal companies today use the post horn as a company logo . So also the Deutsche Bundespost and the Deutsche Post AG . The Deutsche Bundespost was a state-owned company that was active in telecommunications in addition to the normal postal system. With the privatization of the Post, this task was eliminated, which is why Deutsche Post AG received a different company logo without the stylized arrows representing lightning bolts. These lightning bolts symbolically referred to the electricity used for telecommunications. A parody of the post horn symbol is the plague squirrel , which was the logo of the Chaos Computer Club until it was discontinued due to copyright issues .

In local coat of arms

One of the best-known post horns on postage stamps is probably the Deutsche Bundespost's post horn set , published in the early 1950s . In addition, there are also other issues at irregular intervals on which a post horn is depicted. There are also postmarks and subsidiary stamps showing post horns.

Reception of the post horn in literature and music

In the first half of the 19th century, in the age of Romanticism , traveling by stagecoach, symbolized by the post horn, was reflected in various poems. In 1834 Eichendorff wrote the poem Sehnsucht , in which he felt wanderlust when he heard the post horn. In hiking proverbs No. 3 from 1841, he describes the sound of the post horn as a sign of departure: How soon the postilion will not blow, you have to leave everything. This poem set u. a. Hans Pfitzner in his Eichendorff cantata Von deutscher Seele from 1921.

Nikolaus Lenau wrote the poem Der Postillon ( May night was lovely ) in 1833 , in which the Postillon pays his deceased comrade his last respects with his post horn.

The post horn has found its way into various musical works in which either post horns are used or post horn signals are imitated at the latest since the beginning of travel by stagecoach in the second half of the 17th century. Examples for this are:

Close relatives of the post horn are the hunting horns such as the Fürst-Pless horn and the Parforce horn .

After the invention of the valves , the post horn as a round natural horn developed into the cornet as a musical instrument in the shape of a trumpet around 1830 .

In biology, the post horn is the namesake for several animal species:

Many students also refer to the grade `` Insufficient '' as post horn, due to the similar shape of post horn and the number 6.