The title of this article is ambiguous. For the asteroid of the same name, see (1436) Salonta .

Salonta ( Hungarian Nagyszalonta , German  Großsalontha ) is after Oradea the second largest city in the Bihor district in the historic Kreischgebiet in Romania .

The Salonta in Bihor County

Salonta is located in the east of the Great Hungarian Plain , only a few kilometers from the Hungarian border. The district capital Oradea is 38 km northeast. The two-meter-wide Culişer River, which is connected to the Corhana Canal (Canalul Corhana) , flows through Salonta .

As early as 324 AD and 337 AD Salonta and the surrounding area were inhabited by Sarmatians (an ancient Turkish people). The oldest archaeological finds in the region date from the Stone Age and the Bronze Age . In 1214 the place was first mentioned under the name Zolonta . In 1587 the present Hungarian form of Szalonta is attested.

In 1332 the papal decimal places mentioned Zalancha as Zalanta as the church square. Until the 16th century Salonta was a rather insignificant village, which was in the shadow of the nearby Kölcsér ( Romanian Culișer ) castle . Salonta then belonged to the Toldy family . In 1433 Salonta belonged to the Toldy family as well as the Nadaby family . However, in 1558 the castle was destroyed by the Turks . In 1598, however, the Turks withdrew to Oradea. In 1606 300 soldiers were resettled by the Transylvanian Prince Stephan Bocskai . In 1658 the residents of the castle and the village received news that Turks were approaching the city. From 1660 Salonta was under Ottoman rule for a few decades and was the center of a sanjak . Then the city belonged to the Habsburg Empire for more than 200 years . Industry began to settle at the end of the 19th century, helped by the commissioning of the railway line from Fiume via Szeged and Békéscsaba to Oradea ( Nagyvarad ) . This line ( Alföld-Fiumei vasútvonal , dt .: Railway Line Plain-Fiume) was the longest and most important railway line in Hungary at that time.

At the end of the 18th and beginning of the 19th centuries, around 200 noble families lived in Salonta. As a change of frontier after the Treaty of Trianon , Salonta was divided in the early 1920s after World War I. The outer part of the settlement (today Újszalonta ) remained with Hungary and the rest came to Romania despite a clear Hungarian majority. That is why in Hungarian Salonta is still called Nagyszalonta , obsolete Nagy Szalonta , (“nagy” for large) to avoid confusion with Újszalonta (“új” for new).

The city was temporarily reunited from 1940 to 1944 through the Second Vienna Arbitration and again became part of Hungary. When Salonta finally fell to Romania, the place was called “Salonta Mare” (“mare” for large).

Until 1989 there was a synagogue in Salonta on today's Strada Oradiei next to the Arany János Elméleti Líceum School . The Jews in Salonta, including Markowitsch , sold the property and it was then torn down. Today a memorial can be found on the sidewalk that is supposed to remember the synagogue. The land is not used to this day in the future should a school yard of the adjacent Arany János elméleti Liceum (about János Arany Theory Applied Sciences ) are.

The 3 m wide boiler with which the record was achieved.

In 2006 the city set a record by boiling 5045 liters of goulash at once. This record was then entered in the Guinness Book of World Records . The record of the largest bowl of soup is 5045 liters and is a goulash soup and saved by the Town hall of Salonta in Salonta Romania on June 3, 2006 it was on June 3, 2006 for Salonta. Nu e meritul meu, e meritul comunității (“It is not my merit, it is the merit of the community”), said László Török.

Over 65 people were involved in the project. The cooks and volunteers peeled the onions , potatoes and carrots . Then they cooked the 60 kg of onions, carrots and celery fried, and with 700 kg of meat , 40 kg of hot peppers , 40 kg of spice paste (Cremă Gulaș) , 20 kg of dumplings and 750 kg of potatoes. It took almost 10 hours to prepare.

Salonta is located on today's main line from Arad to Oradea; There are connections to both cities several times a day. The line leading to Hungary is also still in operation; it leads over the border town of Kötegyán to Békéscsaba . There are three passenger trains per day on this route. The European route 671 runs through the city from Satu Mare to Timișoara . From Salonta, a border crossing on the Drum național 79B leads to Méhkerék .

There are 7 churches in Salonta :

The Csonka Torony (Hungarian for "the capped tower") is the symbol of the city of Salonta. It was part of Salontas Castle and served as a watchtower, in which gunpowder and weapons were stored at that time.

The construction of Salontas Castle was started in 1620 by Heiducken and finished with the help of Rákócozi György in 1636 and stood until 1658. At that time the Turks raged in the area and according to tradition, a large part of the castle was destroyed in an attack. According to other traditions, the castle and the settlement were deliberately destroyed by order of the rulers at the time, so that they could not come into Turkish possession. From 1658 on, only the three-story tower remained. It was not until 1899 that the tower was raised and given a roof.

The four-story tower has been renewed and now appears in a more modern light. When the museum opened, original furniture by Arany János was put in. Over the years pipes and many other things were stolen, after which the city tried to buy some back.

Every year on March 2nd, an Arany János festival is celebrated on the occasion of the birth of the Hungarian poet at the Csonka Torony . On the occasion of his 200th birthday there was a big anniversary celebration in 2017, and there was also a website until 2018.

The Róth Ház ( Romanian Casa Roth ) is a historic house in Salonta. The old house originally came from a prince named Ármin Róth. After the roof collapsed, the house was renovated in summer 2017 at the city's expense. The appearance was retained as much as possible according to the old design. In the future, it should also be made accessible. 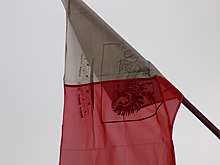 The flag of Salonta on the town hall.

The coat of arms of Salonta is similar to the Hungarian state coat of arms . It is "split" in the middle and has a silver crown . In the left white field there is a golden lion and in the right red a black raven. When the lion and the raven touch their hands together, this is supposed to represent a "union".

The city colors are white and red .