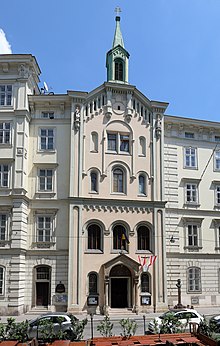 Interior view towards the altar

A chapel consecrated to Saint Barbara was first mentioned here in 1573 as part of the Vienna Jesuit Convict. In 1652–1654 the Konvikt and chapel were rebuilt in the Baroque style . After the Jesuit order was abolished in 1773, Maria Theresa handed the building over to the Greek Catholic Church as a seminary under the name Barbareum . Since several countries of the monarchy, especially Galicia, had numerous believers from the United Church, the training of priests was to be relocated to Vienna and significantly improved. This resulted in the first Uniate Ukrainian parish outside of Ukraine in 1784. In 1842 there were plans to demolish the previously free-standing church in order to build a new main post office building in its place and to relocate the Greek Catholic community to St. Johann Nepomuk in Praterstrasse. But then it was decided to integrate the church into the new main post office building and to give it a new facade. In the years 1852-1892 it again served as the official place of worship for the Greek Catholic Central Seminary. In the 1930s there were again plans to relocate the church in order to redesign the main post office. With the annexation of Austria to the German Reich in 1938, however, these plans were dropped again. On January 15, 1945, the church was badly damaged by bombing. It was renovated after the war by the postal administration to which the building belonged, so that the parish did not incur any costs. Several renovations were carried out on the church in the 20th century, and a new gallery was added in 1962 . An internationally recognized Ukrainian church choir, which has already made several recordings, works at the church. In 1979 the Austrian Post published a special Christmas postage stamp depicting the birth of Christ based on a painting by Moses Subotić from 1775 from the Church of St. Barbara.

The Barbarakirche is an early baroque wall pillar church and has a remarkable early historical facade by Paul Wilhelm Eduard Sprenger from the year 1852. It has a gable tower in the round arch style and a canopy portal on stone columns with ornamented cube capitals. In the tympanum there is a modern mosaic picture of Saint Barbara from 1956. In the upper facade area there are niches with the statues of Saints Basil and Barbara. On the side of the facade there has been a monument to the Ukrainian writer Iwan Franko since 1999 , created by the Lviv sculptor Liubomir Jaremchuk.

The interior is of high quality and uniform in the Rococo style. It dates from around 1780. The iconostasis , the altar, the pulpit, the cathedra and the baptismal font were mostly created by Arsenius Marković (sculptures) and Moses Subotić (paintings). The iconostasis is structured by Corinthian columns and pilasters and richly decorated with gilded carvings. The doors show Saint Michael , the Annunciation of the Lord and Saint Stephen . Above it are the pictures of Saint Nicholas of Myra and John the Baptist , in the middle Madonna with child and teaching Christ from the beginning of the 19th century. Also worth mentioning are the depictions of the Holy Trinity , the Last Supper and, on the sides, the Twelve Apostles by Efrem Klein, all around 1780. In the choir there is a preparatory altar with holiday change icons by Moses Subotić. Another notable altar is a free-standing marble block altar with a holy grave and a ciborium structure , also around 1780. Other pieces of equipment are a tabernacle in the form of a church from the end of the 19th century, a wall retable with a picture of Saint Barbara of Subotić, which is very similar with Maria Theresa, and a remarkable Madonna icon around 1600.

Wall paintings by Svjatoslav Hordynskyj from 1983–1985 show Christ Pantocrator surrounded by angels, Eastern Church saints and scenes from the New Testament in the chancel and in the nave. On the side walls of the choir gallery are the representation of the baptism of the Kievan Rus by the holy Grand Duke Vladimir I in 988 and the liberation of Vienna after the Turkish siege in 1683 with the help of Ukrainian Cossacks .

The chapel of Saint Josaphat Kunzewitsch was designed by Karl Holey in 1923. The relics of the saint were kept here from 1916–1949 before they were smuggled from Vienna to Rome for security reasons from the Soviet occupation forces, where they are still to this day . In the chapel there is a wall retable of the saint by Paul Reckendorfer and another picture depicting the calling of Saint Josaphat, both from 1963. Furthermore, the vestments of the saint (around 1620) are exhibited in a showcase and the coffin in which his relics were located. In the chapel you can also see a Bohemian box nativity scene from 1890 and two parade flags from 1900.

Oil paintings of Saints Nicholas and Spyridon , donated by the family of Count Karl von Coudenhove in 1834, various other holy images from the beginning of the 20th century, two historicist monumental paintings by Yuri Balla ( Cyril and Method , Vladimir and Olga ) are kept in the sacristy . from 1902, a Russian black icon of Our Lady from 1784 Silence of Sorrows , a gospel book with dedication cover by Maria Theresa with silver fittings and porcelain medallions on velvet, a magnificently decorated filigree cross from a monastery workshop on Mount Athos , a processional cross with enamel and rock crystal decorated with a half-length portrait of Christ embroidered in the petit-point technique, which is said to have been made by Marie Antoinette , Maria Theresa's daughter, a bishop's crown with a staff from the mid-19th century, and paraments from the 19th century . and 20th century.

To the left of the entrance there is a memorial plaque on the wall of the house for the Ukrainian composer and conductor Andrij Hnatyshyn , who worked in this church from 1931 to 1995 and directed the choir.

Sacred buildings in the 1st district of Vienna