The Dominican Church ( St. Maria Rotunda ) is a Roman Catholic parish church in Vienna, originally built in 1237 and last rebuilt in the 17th century . It is located on the Dominican Bastion at Postgasse 4a in Vienna's 1st  district, Innere Stadt . 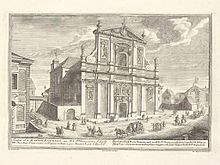 The Dominican Church in 1724. Engraving by Salomon Kleiner . 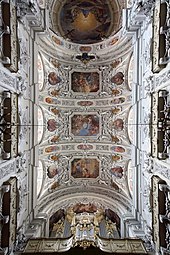 Ceiling fresco of the nave; a work by Mathias Rauchmiller

The order of the Dominicans was founded in 1226 by Duke Leopold VI. called to Vienna. A monastery with an attached chapel was built on a plot of land made available to the monks near the parlor gate . The Romanesque chapel was consecrated in 1237, but as early as 1283 - after being destroyed by two fires - it was decided to build a new and larger, this time Gothic church. In 1302 the choir of this church was consecrated by the Dominican Cardinal Nikolaus Boccasini (later Pope Benedict XI ). In the course of the first Turkish siege in 1529, most of the church was demolished in order to strengthen the Vienna city wall with the building material obtained .

On May 6, 1631, Emperor Ferdinand II laid the foundation stone for a new, baroque church. After about three years, the shell was completed and the consecration took place on October 1, 1634. The dome and facade were only built later, from 1666 to 1674. At that time, the Dominican Church was the second largest church in Vienna after St. Stephen's Cathedral .

In 1927 the church was opened by Pope Pius XI. raised to the minor basilica .

Italian builders and artists were mainly involved in the construction of today's baroque church, including the fresco painter Carpoforo Tencalla and the builders Cypriano Biasino , Antonio Canevale and Jacopo Spacio. Master Hieronymus Bregno from Kaisersteinbruch carried out stone carvings , the steps of the stairs in the monastery wing and the church gallery and those of a tower staircase were made of hard Kaiserstein . The design of the facade is based on early baroque Roman churches, which in turn borrowed from the Florentine Dominican church of Santa Maria Novella . Above the portal is a statue of St. Mary of the Rosary , to which the church is consecrated. The front of the church houses eight other stone figures of saints, all of which belong to the Dominican Order: Our Lady is flanked by the kneeling figures of Catherine of Siena and Agnes of Montepulciano . The statues of Luis Beltrán and Rosa of Lima are located in the niches of the basement , while Hyacinth of Poland and Vinzenz Ferrer are on the upper floor . At the corners of the upper floor are the statues of the most important Dominican scholars, Albertus Magnus and Thomas Aquinas .

The nave is 46.54 meters long, 20.90 meters wide and 22.10 meters high. Today's high altar by Karl Rösner with an altarpiece painted by Leopold Kupelwieser dates from the years 1839 to 1840. The altarpieces in the St. Thomas Chapel were painted by the court painter Emperor Ferdinand III. , Frans Luycx , in 1649. In 1896 the church organ was replaced by a new organ from the Rieger Orgelbau company .

According to the contract dated March 18, 1675, Mathias Rauchmiller created the early baroque ceiling paintings of the nave . A wide range of images on the Marian theme unfolds in a total of 46 images. The 3 main images represent the Marriage of Mary , Bride of the Holy Spirit and the Sacrifice of the Virgin . The original dome fresco is attributed to Nikolaus van Hoy (1631–1679). After a new flat dome was moved in after 1820, Franz Geyling created the new dome fresco in 1836 .

The ceiling frescoes of the presbytery and those of the transept arms are attributed to Carpoforo Tencalla (1675/76).

There are two organs in the Dominican Church . Around 1750 an unknown master built a (presumably two-manual) organ on the west gallery, the case of which has been preserved. The organ was replaced in 1895 by a new one, which was built by the organ builder Rieger (Jägerndorf / Austria-Silesia). The new movement initially had 36 stops on 3 manual movements with mechanical cone chests. The historic organ case was expanded for this purpose. The case was preserved from the former parapet positive. In 1991, the Mozart year, the organ was extensively restored by the Schuke organ building workshop (Berlin). The prospectus , which was lost in the First World War , has been reconstructed. Changes to the disposition in the meantime have been brought back to the original condition. In the swell, some (aliquot) registers were placed on a small additional drawer. In addition, the parapet positive was set up again. Today the slider chest instrument has 46 stops on three manual works and a pedal . The playing and stop actions are mechanical.

The choir organ was built by the organ construction company Schuke (Berlin) in 1992. The slider chest instrument has 19 stops on two manuals and a pedal. The playing and stop actions are mechanical.

Sacred buildings in the 1st district of Vienna