The parish and pilgrimage church of the Holy Trinity and St. Michael is a Roman Catholic basilica and parish church in the community of Sonntagberg in the district of Amstetten in Lower Austria . The monumental, baroque church building in the basilical scheme with double tower facade and a transept stands in a dominant position on a 712 meter high ridge and is visible from afar and is one of the landmarks of the Mostviertel . The basilica forms the Kirchweiler Sonntagberg with the hospice, the rectory and inns . In 1964 the church was elevated to a minor basilica .

Pilgrimage souvenirs with miraculous image and founding legend, around 1750

There is a founding legend with the dream of a shepherd and the so-called character stone, a large natural stone. A chapel was built in 1440 by the Seitenstetten Abbey under Abbot Benedict I. The patronage of the Trinity was documented in 1477 . The chapel was already a destination for pilgrimages in the 15th century. During the Reformation , pilgrimages were hindered by the Lords of Gleiß . In 1490 a late Gothic church was consecrated. In 1614 a copper plaque with a mercy seat depicting the Trinity was attached to the drawing stone . In 1651 a brotherhood was founded. From 1666 the annual pilgrimages increased. From 1706 to 1732 today's church was built according to the plans of Josef Munggenast (1706–1717) and Jakob Prandtauer (1718–1732) similar to the monastery church of Melk Abbey . The church was consecrated in 1729, made a parish church in 1783 and a minor basilica in 1964. The basilica was restored several times: from 1865 to 1891, from 1965 to 1966 inside and from 1981 to 1984 outside. The renovation work on the Sonntagberg basilica, inside and outside, should be completed by 2024 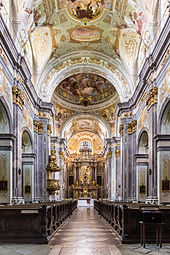 Interior with a view of the high altar

The entire church building is surrounded by a level, paved platform with a so-called gallery with ventilation and drainage systems. The level is accessed by the main facade in the west via a representative staircase with iron bars.

The slightly advanced and concave swinging two-storey risalit west facade between two mighty three-storey towers with curved tent roofs for onion knobs has large window openings in the middle. The main portal is framed by pilasters with entablature and a circular light and a mighty iron plate gate with fittings and figurative decor of Turkish women and men . Above the main portal are the statues of Mercy Seat flanked by two angels, and above the clock on the top beam are the statues of Archangel Michael flanked by Saints John and Paul by the sculptor Peter Widerin (1719).

The nave walls spring back slightly on the ground floor and protrude in the high nave area with struts over the pent roofs of the side aisles and have high arched windows. The transept has rounded corners and a portal in the south and two portals in the north. The transept portals have square skylights and two-lane stone-walled windows above and a large rounded quadruple window above.

The rectangular choir has a flat round apse and carries a bell ridge with a curved dome and lantern. The choir is connected to the rectory in the east on the first floor with a corridor over a round arch bridge. The sacristy is attached to the choir in the south and the Holy Sepulcher Chapel is attached to the north.

The four-bay main nave of the nave under a barrel vault with trimmed stitch caps has round arched arcades to the rows of side chapels. The wall structure is rhythmized with two-tier colossal pilasters and combined with a mighty cranked entablature. The first westernmost yoke is constricted and vaulted with a narrow square and has two round bar-framed portals to the tower chambers. Above it is the gallery with a rambling middle section over a wide arched arcade. The gallery balustrade is carried by angels and has a balustrade over a row of gilded corrugated stones. The side chapels as three rectangular rooms on each side have sloping corner wall pillars with wall surface gradation and pendentive domes.

Over the crossing is a mighty pendentive dome . The short transept arms under belt barrels above colossal pilasters with lavish - as in the ship - wood-carved, gilded acanthus leaf capitals .

The sacristy portals have curved roofs with volute cushions with oratorio windows partially barred above. The two-bay, somewhat retracted choir has a barrel vault with stitch caps and a flat-arched apse. The wall surfaces of the choir are rhythmized by colossal pilasters and four side portals.

The wall and ceiling painting with a dominant, monumental cycle of large, framed picture fields in the main vault is the main ecclesiastical work of the painter Daniel Gran (1738–1743). The mock architecture and frame painting are by Antonio Tassi and Kürchmayr around 1740. The plasterer Franz Josef Wiedon created rich and imaginative stucco applications on the architectural elements and the landscape views in the chapels from 1748 to 1750. Damage to parts of the ceilings from 1829 and 1887 was renovated in 1890 by the painter Andreas Groll and supplemented with a Pentecost fresco. The painting was restored in 1965 by the painter and restorer Gustav Krämer .

The colorful, cheerful frescoes by Daniel Gran have the following cycle: In the choir God the Father in his creation, in the left cross arm God's Son in the Incarnation, in the right cross arm the Holy Spirit in his origin on the apostles, in the nave the victory over anti-God powers and in the triple dome in the sky.

In the glass windows from 1886 in the choir are medallions with the flaming Heart of Jesus and the Heart of Mary. In the western nave yoke there is a glass painting of St. Elisabeth of Thuringia with landscape and Mother of God with St. Dominikus from 1906 based on a design by Father Benedikt Hager. 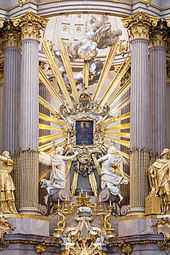 High altar with the miraculous image

The remarkable baroque high altar as an autonomous round temple on a high base with twelve fluted free columns - symbolizing the twelve tribes of Israel - was built from 1751 to 1757 according to a design by the architect and sculptor Melchior Hefele. In the center of the high altar is the miraculous image of the Holy Trinity from 1614 in a rich, silver-chased and chased frame by the goldsmith Josef Wilhelm Riedl. The miraculous image with the frame is carried by two marble angels by the sculptor Jakob Christoph Schletterer . Below the image of grace is a part of the sign stone and in front of it a striking seven-armed chandelier with high-quality sculptures of Moses , Aaron , Melchizedek and Ezekiel von Schletterer, emerging from two roots . In the base zone there are four gold-plated lead reliefs by Hefele with the depictions of the sermon of John the Baptist, the Annunciation, Christ on the Mount of Olives and John sees the heavenly Jerusalem. The tabernacle with a canopy by Hefele is connected with worshiping seraphim angels by Schletterer. In front of the high altar are two mighty candlesticks from 1682.

The popular altar, ambo and priest's seat were created in 2014 by Lois Anvidalfarei from Lasa marble .

Eight baroque side altars face each other in pairs.

The organ was built between 1774 and 1776 by the organ builder Franz Xaver Christoph (Vienna) and is one of the most important late baroque organs in Austria. In 1872 the main shop was rebuilt by the organ builder Josef Unterberger (Innsbruck) and a reed register (trombone 16 ′) was added. In 1961 an 8 'trombone was added to the pedal . In the course of a comprehensive restoration of the organ by the organ building company Pflüger, a number of changes were reversed and the instrument was reconstructed as far as possible to its original state. It has 25 stops on two manual works and a pedal. The organ has the so-called "short octave" in manuals and pedal, which was common in the Austrian organ landscape until the early 19th century.