The Basilica of the Birth of Mary , also the parish and pilgrimage church Graz-Mariatrost , is a Catholic church located on Purberg in Graz - Mariatrost . The baroque building with the former Pauline or Franciscan monastery Maria Trost is one of the most important pilgrimage sites in Styria .

View from the southwest (Teichhof)

The pilgrimage church stands at 469  m above sea level. A. high Purberg, a ridge in the northeast of Graz. The elevation is made up of Devonian Schöcklkalk and forms a southern branch of the Grazer Bergland on the left bank of the Mur . The breakthrough of the Mariatroster brook with the Weizer Straße (B 72) that runs there separates the continuously wooded hill on the shady side from the Kogelberg - Hauenstein ridge . Upstream - behind the Purberg from Graz - is the Föllinger basin with the district of the same name. To the southeast the ridge rises to a ridge of the tertiary hill country , which separates the Mariatroster valley from the Stiftingtal .

The name Purberg or Burgberg for the Mariatroster Kirchberg was first mentioned in 1615. The historian Kubinzky sees this as a reference to a medieval castle complex that is no longer known today . The exposed location above the breakthrough valley would also suggest previous uses for protection or religious cult activities. The church can be reached from the terminus of tram line 1 via the Angelus staircase with 216 steps; hiking trails lead to the Purberg from the west and north. To the east of the basilica are the Kirchenwirt and the Mariatroster cemetery with around 50 parking spaces.

Mariatrost Basilica from the north

Mariatrost is one of the most important Marian pilgrimage sites in Styria. The destination of the pilgrims who came and will come from Austria, Hungary and Croatia is a miraculous statue of the Virgin Mary that comes from Rein Abbey near Graz and originally stood in the house chapel of the Purbergschlössl. The owner of the estate, Franz Caspar Conduzi, handed it over to the Pauline Order in 1708 .

In 1714 the foundation stone for the church was laid after it was officially recognized as a place of pilgrimage. Construction began under Andreas Stengg and his son Johann Georg Stengg . The first services were held just five years later. Emperor Charles VI. initiated the construction of a road from Graz to Mariatrost in order to improve the accessibility of the place. The shell of the church was completed in 1724. However, it took until 1779 to complete the building. A few years later, the Paulines had to leave Mariatrost as part of the Josephine reforms .

The monastery and pilgrimage church became a parish church and the monastery tracts sold to a butcher were converted into stables. Between 1846 and 1996 the Franciscans led the church again as a place of pilgrimage. In October 1968 the Mariatroster Declaration was published in the basilica . In 1996 the order left the monastery. Since then, the parish has been looked after by priests from the Graz-Seckau diocese . The boom culminated on October 28, 1999 with the appointment of the church as a minor basilica by Pope John Paul II. The entire renovation of the complex was carried out under the pastor, Father Johannes Pfeffel, in the 1980s. 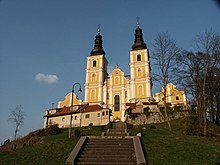 View from the Angelus staircase

The basilica is to be assigned to the top form of the emperor baroque . Two four-storey facade towers (61 m) and a dome are the features of the structure of this cross- domed church that can be seen from afar . The basilica is enclosed by the buildings of a former monastery, which was first used (1708–1786) by the Paulines and later by the Franciscans . At the level of the last third of the Angelus stairs is a body set up by the Graz artist Erwin Huber in 2000, medium-size bronze sculpture of the Annunciation Angel Gabriel .

The church building with the towers is enclosed by the wings of the monastery building. A dome towers over the crossing of the basilica. There are chapels on both sides. The model for the church building is the Jesuit church Il Gesù in Rome. 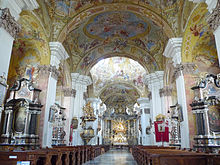 In the center of the high altar is a late Gothic statue of Mary from 1465, which comes from the Rein monastery. In 1695 it was redesigned by Bernhard Echter to become the Mother of Grace with a baroque covering . Above it is an inscription carried by angels: Solatium vitae nostrae (consolation of our life). The vaulted ceiling, the dome and the side walls of the church interior are decorated with frescoes by Lukas von Schram and Johann Baptist Scheidt from 1733 to 1754. One representation commemorates Austria's decisive victory over the Turks. The emperor and his generals look gratefully at the sky. Angels hold the name of Mary in their hands.

In the dome fresco, Mary, the Mother of God, is venerated as Queen of Heaven and is surrounded by the light of the Holy Spirit dove . At the base of the dome there are images of the four evangelists, on the vaults the four occidental church fathers: Gregory the Great , Hieronymus , Ambrosius and Augustine . In the side chapels of the basilica, the stories of the pilgrimage site with Mary as helper and comforter are shown.

Veit Königer created the pulpit in 1779. There is an allegorical representation of faith (cross) on the sound cover; on the pulpit basket representations of hope (anchor) and love (heart). The three reliefs of the basket show scenes from the life of Mary ( engagement of Mary with Joseph , meeting of Mary with Elisabeth , Assumption of Mary ). The reliefs at the entrance represent miracles, the one on the back wall the Annunciation to Mary . A similar pulpit is located in the parish church of Nestelbach near Graz , also by Königer. 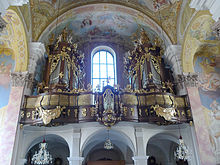 The organ case is adorned with the figures of King David and Saint Cecilia . The organ itself dates from 1993, has 45 stops on three manual works and a pedal . and was created by Pflüger Orgelbau .

Churches and other houses of prayer in Graz