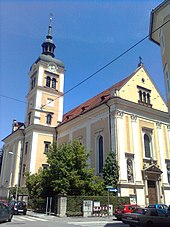 The Vincent Church is a Roman Catholic parish church in the 14th  Grazer district Eggenberg and the hl. Saint Vincent de Paul consecrated.

At the end of the 19th century there was a former village called Algersdorf in the fields in front of Graz . The settlement of industrial companies led to a population growth. For this reason, the prince-bishop wanted to set up a welfare and pastoral care office for the poor population. He entrusted this task to the Lazarists , who then moved into their second Graz branch. The motifs for the founding of the church are embedded in a document that is walled into a foundation stone. The foundation stone was laid on May 9, 1892 at 8 a.m. For reasons of cost, the Renaissance style and not Gothic was chosen during the historicist era . The plans for the church, built with a cross-shaped floor plan, come from the architect Robert Mikovics . The tower cross was consecrated on April 6, 1893, the church was consecrated on April 24, 1895. Next to the portal on the south side there are statues of St. Leopold and St. John the Baptist.

The organ was built in 1900 by the organ builder Konrad Hopferwieser and restored in 2003 by Orgelbau Kuhn (Männedorf, Switzerland). The cone chopping instrument has 17 stops on two manual works and a pedal . The action actions are mechanical, the stop actions are pneumatic.

Churches and other houses of prayer in Graz