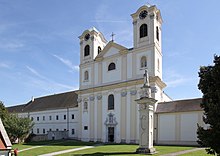 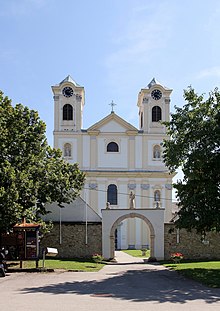 Main front seen from the Anger

Interior view, from the nave to the choir

The Basilica of the Immaculate Conception in Loretto is in the market town of Loretto in Burgenland . The Roman Catholic parish and pilgrimage church rises between the former Servite monastery and a spacious cloister. The Loretto Chapel is located in the courtyard of the cloister. The church building, which was made a minor basilica in 1997, belongs to the Eisenstadt dean's office in the Eisenstadt diocese . The church, dedicated to the Patronage of the Immaculate Conception , is a listed building .

A Johanneskapelle built in 1431 was probably destroyed by the Turks in 1529. In its place, the landlord Rudolf von Stotzingen built a chapel based on the model of the Loretto Chapel in the Augustinian Church in Vienna around 1644 . He donated a miraculous image based on the archetype of the Black Mother of God of Loreto in Italy . Under the landlord Franz Nádasdy , the foundation stone was laid in 1651 for a monastery with a church according to the plans of the builder Anton Riebler. In 1659 the Chapel of Grace was moved to its current location and the church was consecrated. After the complex was largely destroyed by the Turks in 1683 , the church was rebuilt by Prince Paul Esterházy and consecrated again in 1707 . In 1738 the facade with a curved volute gable and roof turret was removed and replaced with a two-tower facade by 1740; the onion helmets burned down in 1781. In 1787 the monastery was closed and pilgrimage was forbidden. The pilgrimage revived in the 19th century and from 1926 to 1956 the monastery was again inhabited by a convent of the Servite Order . The Oblates of the Virgin Mary (OMV) have been looking after the place since 1964 .

During a renovation in October 2016, a 300-year-old statue of the Virgin Mary was discovered in the altar of the Mercy Chapel, which was desecrated during the Turkish wars in 1683. The statue, from which the head and the baby Jesus had been chopped off, lay bedded on sand under the stone altar plate, so that it was well protected from the weather and further damage. As a result, the original color was preserved, which makes the statue and the preserved head particularly valuable for art historians. After a restoration by the Federal Monuments Office , it will return to Loretto.

The large baroque building was built in the 17th and 18th centuries. The double tower facade is a wide two-storey wall with pilasters with a central main portal. The iron fittings of the portal wing are a Viennese work from 1691. There is a niche figure of St. Barbara , in the side axes below the figures of the holy kings Stephan and Ladislaus , above two church fathers . The tower floors, which are rather slender towards the mighty façade, now have low tent roofs and the depiction of the third of Anna and a Servite saint in the niches.

The interior of the church consists of four nave bays under a barrel vault with stitch caps and has arched arcades on the sides that open to chapels and support low galleries. The windows are blind to the east and open to the west. The north main gallery on pillars over groin vaults has a paneled parapet. There is a splendid lattice, partly gilded with putti, from the year 1763. In the nave up to the level of the gallery there is stucco from the first construction phase from 1650 to 1670, which are attributed to Carlo Martino Carlone . After the fire of 1683, the vault zone was probably built lower and is without stucco decoration.

The high altar was donated in 1766 by cavalry colonel Johann Kipthay. The altar bears the coat of arms of Prince Paul Esterházy, who was the founder of the first high altar.

In the side chapels there are side altars: from north to south, on the left under the north-east tower, the All Saints' Altar, previously in the Peregrini Chapel, transferred here in 1734; then the Philipp Benitius Chapel, donated by Count Nicolaus Draskovich in 1702; then the Stephan Chapel, restored in 1690 by Count Thomas Nádasdy; Then the Johannes Nepomuk Chapel, in front of that Antonius Chapel, renewed in 1687, rebuilt in 1733, with a font made of red marble from the 1st half of the 18th century. On the right then the 5th chapel, consecrated to the plague cartridges, built from 1651 to 1659, renovated by the Bernadovic family after 1700, with the plague saints Sebastian, Rochus, Rosalia and Benno, with a representation of the Pottendorf and Seibersdorf castles, the Loretto Church and the ruins Hornstein Castle; then the Judas Thaddäus Chapel, rebuilt in 1767; then the Peregrini Chapel, previously All Saints Chapel, with an altarpiece of Peregrinus with a bandaged foot; then the Chapel of Our Lady of Sorrows , with the coat of arms of the Bucellini family and above it the imperial crown, renewed by Empress Margareta Theresia and the Bucellini family.

The pulpit is by Ladislaus Damjanovics from Budapest from 1911. According to the chronogram and coat of arms, the organ by Johann Rath from Ödenburg was donated by Johann Lipthay in 1761. The communion bench from the years 1772 to 1773 with reliefs of the seven sorrows of Mary is by the stonemason Johann Ramesmeyer from Loretto.

The sacristy with a pressed barrel vault with stitch caps is located behind the high altar and contains two wall cupboards with twisted pilasters in a carved top from 1723.

The cloister and the Loretto Chapel

The cloister is on the west side of the church and was built in the 18th century. Five, then eight, then six groin vaulted yokes rest on arched arcades over Tuscan pillars. In the west aisle there is an epitaph for RP Joannes Matthias Brenner († 1750).

The chapel stands in the courtyard of the cloister and is a replica of the so-called Holy House of Loreto in Italy. The brick building with wooden beams embedded in the walls with barrel vaults is a rectangular building with a turret with an onion helmet and was built in 1644, and moved to its current location in 1659. The room is divided by a wooden lattice. The altar of grace with a tabernacle and candlesticks was created around 1750. The communion bench is made of stone. At the back is the so-called “black Kuchl” with the miraculous image of the black Madonna by Loretto from 1644 with the silver crown by Philipp Prickler from 1715, within a gilded rocaille frame with a relief of God the Father , around 1750. An oil painting of the Annunciation of the Lord by an Italian master from the 17th century hangs on the west wall.

The simple three-wing two-storey building stands to the east of the church. The monastery gate is in the southern wall and bears a stone volute and the coat of arms of the Servite order. The groin vaulted corridor on the ground floor shows pictures of saints of the Servite order in oval stucco frames with fruits and putti. On the upper floor is a library with a square room with a high cloister vault with a door with a carved essay from the middle of the 18th century. Four wooden reliefs in a rococo frame show scenes from salvation history.

The Marian column stands in front of the church at the former location of the Loretto Chapel. The square pillar, erected around 1700, stands on a six-sided essay with reliefs with scenes from the life of Jesus and carries a statue of the Virgin Mary.

The basilica is depicted on the 7 Schilling value of the definitive stamp series Stifte und Klöster in Österreich of Österreichische Post AG .