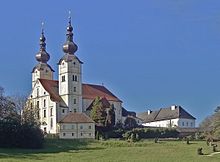 View of the basilica from the southeast

Side chapel from the outside

Interior of the basilica

The pilgrimage church Maria Loreto is a Baroque , Roman-Catholic pilgrimage church built between 1683 and 1686 at the northern end of the historic urban area of St. Andrä in Carinthia . It is under the patronage of the apostles Peter and Paul .

A Loreto chapel was built on the site of today's church in 1647 and has been looked after by Dominican women ever since. Franz Kaspar Graf von Stadion had the current church built over this chapel between 1683 and 1687. The chapel was demolished in the course of redesigning the interior of the church in 1790/1793, instead the chapel was built in the left vestibule.

The Dominican convent was closed in 1782. In 1859 the church came into the possession of the Jesuits. There were major renovations from 1870 to 1885 and 1938. In 2010/11, the two spire helmets were re-covered with copper. The pilgrimage church has been looked after by the Benedictines since 2010. On July 21, 2014, Pope Francis elevated the church to a minor basilica by decree . A two-year restoration had been completed by this time.

The church is a large, north-facing structure. The south side is taken up by the wide facade, a little behind with two 60 m high towers. The facade has five axes and is structured by six giant pilasters . In the three middle, three-story axes are the portals, above them windows and painted glare fields. Of the portals, the middle one bears a segment gable, the two side triangular gables. The outer axes are two-story and have figural niches with St. Paul on the right and St. Peter on the left. The apostle Peter is shown with two keys for binding and loosening on earth and in heaven ( Matthew 16:19 ).

The facade violates some of the classic rules: the giant pilasters are too thick. In addition, there are no beams on them. The pilasters of the triangular pediment come without transition to the Rinnleiste the gabled roof . The sloping gable kinks where volutes should actually begin.

The two towers, completed in 1730, are positioned at the level of the second nave yoke and wear onion helmets.

The nave has six bays, around 45 m long and at its widest point 40.5 m (chapel axis) wide. It takes up the width of the three central facade axes. In the first nave yoke there are chapels between the facade and the towers . The hall-like, 17 m high interior has a flat barrel vault with stitch caps. The end of the choir is flat with rounded corners. Otherwise the choir is only distinguished from the nave by its painting. Behind it is the sacristy . Between the fourth and fifth nave yoke there is a chapel annex on both sides. The connection to the nave is made through semicircular arched openings, the chapels are single-bay with groin vaults and have an apse with two lancet caps each.

The organ from 1883 comes from Martin Hechenberger from Passau. In the church there is also the epitaph for the founder, Bishop Graf Stadion.

The side walls of the choir each have two high windows.

The end wall of the choir is decorated with illusionistic painting from 1793. The painting frames the crucifixion group set up in front of her. It is a painted column architecture with the two prophets Jeremias and Isaias. The landscape of Jerusalem opens up between them. God the Father and the Holy Spirit hover above everything. In a lunette is the coat of arms of Prince-Bishop Franz Caspar von Stadion. The walls of the choir leading to the sacristy bear the following pictures: Thanksgiving offerings by Noah, the sale of Joseph by his brothers, the bronze serpent and the sacrifice of Abraham. Typologically, these images belong to the crucifixion. There are pictures of the four evangelists on the ceiling .

The crucifixion group stands on a classical pedestal. It is often attributed to the Klagenfurt artist Markus Antonius Clauß in 1691. The tabernacle dates from around 1870, the choir stalls and communion bench from 1880/1890.

On the south wall in front of the choir hangs a splendidly framed picture of the Virgin Mary, supposedly a copy of a portrait of St. Luke .

View of the Loreto Chapel

The north side chapel is the sacrament chapel characteristic of a basilica. The altar, which was documented in 1713, therefore has a tabernacle today. The altarpiece was created in 1875 by the Swiss Melchior Paul Deschwanden . It shows St. Joseph with the baby Jesus. The baroque essay depicts John the Baptist .

The southern side chapel is the baptistery. The altar, also from 1713, shows St. Ignatius von Loyola , painted by Deschwanden in 1875, and the Evangelist Johannes in the top picture .

In the vestibule on the left is the Maria Loreto Chapel with a " Black Madonna ". The altar has a restored baroque antependium . On the right is the All Souls Chapel with a classical altar. Its altarpiece comes from the 18th century altar and shows the crucifix.

The monastery buildings are connected to the church via the sacristy extension and extend north of the church. It is a large, modernized complex over a horseshoe-shaped floor plan.

The sacristan's house is located east of the church and is connected to it by a wall with a round arched portal. It is a rectangular, simple baroque building with a hipped roof .