The parish and pilgrimage church Maria Schnee is a Roman Catholic church in the village of Maria Luggau in the municipality of Lesachtal in Carinthia.

In 1513, in a dream, the farmer Helena was commissioned to build a church on a wheat field. She acquired a wood-carved Vesper picture and against resistance built a little church. The foundation stone was laid in 1515, and it was soon decided to build a large church according to the plans of the architect and builder Bartlmä Firtaler , with Hans Kürschner and Siegmund as employees, which was consecrated in 1536 and completed around 1544. In 1986 the church was elevated to a minor basilica .

The pilgrimage church dominates the townscape with the adjacent Servite monastery . The medium-sized, single-nave five- bay nave is followed by a slightly drawn-in two-bay choir with a 5/8 end . The north wall of the nave and choir is covered by the monastery, the south wall shows simply stepped and beveled buttresses, the buttresses on the west side are placed across the corner. The mighty entrance tower stands in the west of the nave on a square floor plan and was built with granite and slate blocks. The slow construction progress is shown by the dates on the church tower, 1520 with the inscription master partllmä viertaler on the 1st floor, 1536 on the 2nd floor, 1543 on the 3rd floor, 1544 on the 4th floor and 1552 on the 5th floor. Divided into five storeys with cornices, the tower has an eight-sided baroque crown from 1741. The vault of the tower vestibule shows imaginatively curved rib stars with three-leaf ends. The tower facade with the rich late Gothic decorative shapes is a characteristic work of Firtaler.

Inside of the pilgrimage church Maria Luggau

From 1733 to 1738 the interior of the church was made Baroque. The late Gothic ribs of the vault in the nave and choir were chopped off in 1733 and replaced by a dense network of stucco work by Franz Hannibal Pittner from Spittal an der Drau. The vault painting around 1740 shows in the center of the choir the miraculous image with the refuge of the sick and to the side the 7 Sorrows of the Virgin , in the nave there are seven scenes from the history of pilgrimage and above the organ Mary with 7 donors of the Servite order can be seen. The rococo balustrade with organ case is from 1765. On the south side there are baroque lancet windows, in the middle a baroque round window with neo-Gothic glazing, from 1879. The main picture on the choir vault shows a renovation with Christoph Brandstätter 1808 .

The high altar from 1749 is by the court carpenter Paul Huber from Innsbruck. The tabernacle with side relic showcases by Anton Müller from Lienz from 1770 is covered with gold, silver and brass fittings. Above the tabernacle under a canopy is the miraculous image of the Luggau Madonna from 1513, clad in brocade robes. The high altar painting of the Assumption of Mary is inscribed with Cosroe Dusi Venezia 1834 . The rococo pulpit around 1770 bears figures by Johann Paterer around 1770. 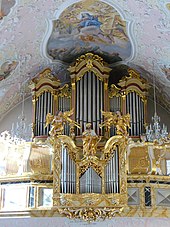 As the first organ , a used positive , built by Daniel Herz (I / 6), was bought by the parish church in Brixen in 1668 . This instrument later came to Kirchbach im Gailtal. In 1767 a Wörle organ from Bolzano (II P / 17) followed. Due to the repeated redesign and the small number of pedals and manuals, it no longer met the requirements. In 1899 a new organ was therefore built by Alois Fuetsch from Lienz using a number of Wörle registers . (II P / 15) It was not the sound, it was the susceptibility to failure and the lack of precision of the pneumatic action that called for an innovation. In 1987 the sound work by Paolo Ciresa (Bozen / Tesero in the Fiemme Valley) was renewed (II P / 21). In the Rückpositiv facade of Wörle, the organ case of Fuetsch in conjunction with the new inner life, the important stages of the organ story of Maria Luggau reflect.