Seitenstetten Abbey, the "square of God"

Church of the Seitenstetten Abbey 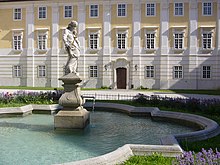 Ceiling fresco in the marble hall by Paul Troger

Ceiling fresco of the abbey stairs by Bartolomeo Altomonte

The pin side Stetten (Lat .: Abbatia BMV Assumptae apud Seitenstettengasse ) is a convent of Benedictine (OSB) in Seitenstettengasse at the Moststraße in Mostviertel ( Lower Austria ). Donations from Udalscale (Udalschalk) in 1112 and from Magdeburg Archbishop Wichmann von Seeburg around 1180 formed the economic foundation of the former collegiate and later Benedictine monastery Seitenstetten .

Seitenstetten is on the Voralpen Straße (B 122) roughly halfway between Amstetten and Steyr . The own train station “St. Peter-Seitenstetten “( Western Railway Line ) is about 2.5 km from the village.

The Udalscale , which was first documented in 1109 - also Udiskalk or noble free Udalschalk von Stille und Heft - was in 1112 the donor of his inherited property with the income of the subjects to a monastery, which was located on the site of today's Seitenstetten Abbey. These were property in Grünbach and the area of ​​Stille und Heft am Hausruck in Upper Austria . In 1114, Benedictines from Göttweig Abbey took over the administration of the new manor . In 1116, Bishop Ulrich I von Passau , a relative of the Counts Formbach-Ratelnberg , consecrated the new collegiate church and gave the monastery the extensive parish of Aschbach as a fief . In 1142 the monastery also received the large parish of Wolfsbach . From these two large parishes all fourteen parishes emerged that the Seitenstetten Abbey still looks after religiously today. The early Gothic church in its walls and the unusually proportioned - now baroque stuccoed - small knight's chapel on its side reminds of the defensive shape of the current baroque monastery .

Around 1180, Wichmann von Seeburg, Archbishop of Magdeburg , transferred extensive forests to the monastery on the Ybbs with the stipulation that a cell be built there and constant worship. The monastery thus owned goods in and around Seitenstetten, forest areas in the middle and upper Ybbstal, around today's Göstling an der Ybbs with iron mines and salt works, in whose district the later parishes of Allhartsberg , Aschbach , Biberbach and Krenstetten emerged, with changeable historical development of the property . The first reference to a monastery school , the later Stiftsgymnasium Seitenstetten, comes from the founding century .

After setbacks in the development of the monastery due to two monastery fires (1261 and 1290), Abbot Konrad had the first land register of the monastery laid out. A renewal took place under the bellicose abbot Rudolf I, who was just as concerned with keeping knightly court as he was with strict monastic discipline. He punished the conventuals with months of dark arrest in dungeon-like chambers. After disputes over property, the monastery gradually took off in the 14th century. In 1347 the convent had 22 members. After a long period of decay, Abbot Benedict I, who had previously been prior of the Schottenstift in Vienna , also implemented the Melk monastery reform in Seitenstetten and brought about an upswing in religious and cultural life. This abbot had a chapel built and consecrated on the Sonntagberg in 1440 , thus establishing the Sonntagberg pilgrimage under the care of the monastery. A grave plaque on the back wall of the knight's chapel commemorates the two-meter-tall abbot from Bavaria, who earned his living as a black artist, market trader and musician before becoming a monk, later prior in the Vienna Schottenstift and finally abbot in Seitenstetten. It is reported that Kilian Heumader, one of his successors, rode sword-girded in the midst of heavily armed men during the Turkish wars in Hungary to the court days in Steyr .

The Reichstürkenhilfe , but above all the Reformation and the introduction of the evangelical confession of Martin Luther , hit the monastery hard. Abbot Michael Bruckfelder, from Carinthia, publicly declared himself a Protestant. In February 1572 he was married to Sindelberg by Armand Khramer, the Protestant castle preacher in Losenstein , with Maria Schmelch, a foster daughter of the Carinthian preacher Gröblacher. Mr. von Niederwallsee , the nurse zu Achleiten and the court judge zu Seitenstetten acted as witnesses . As early as 1571, Michael Bruckfelder had his marriage property, Seitenstetter silver crockery and other monastery property, brought to the Sindelburg Prädikanten in a carriage drawn by four horses. When arrest threatened in the spring of 1572, he went to safety with his Protestant patron.

The number of friars in Seitenstetten decreased rapidly. It was not until Abbot Christoph Held (1572–1602), actively supported by the Imperial Austrian Monastery Council, that the spiritual renewal began. Baroque art found its way into the following abbots . Bavaria and Swabia increased the membership of the convention. But it was only after the Thirty Years' War and the re-Catholicization that Abbot Gabriel Sauer (1648–1674) succeeded in consolidating the monastery economically and in leading the convent to its religious climax. A large construction activity could now also begin:

Abbot Benedikt II. Abelzhauser (1687–1717) had Jakob Prandtauer build the pilgrimage church Basilica Sonntagberg . From 1718 to 1747 today's monastery building was built in the Baroque style. The financial resources for this came primarily from the earnings of the copper mine in Radmer (Styria) and the Reichraming brass ironworks (Upper Austria).

After the difficult time of the reforms of Josephinism at the end of the 19th century and the coalition wars, the monastery reached its peak at the turn of the century. Abbot Theodor Springer (1920–1958) brought the pen out of the economic crisis after the First World War and saved the pen without being repealed by the Second World War .

Under Abbot Albert Kurzwernhart (1962–1984) extensive renovation work was carried out on Sonntagberg, in the other parish churches, but above all in the collegiate church.

From 1985 to 1991 the entire monastery building was restored from the cellar to the roof under Abbot Berthold Heigl . The baroque monastery garden in the west of the monastery is considered a jewel of the monastery and was revived and made publicly accessible in the mid-1990s under the incumbent abbot. Concerts, celebrations and once a year garden days with exhibitions from various regional garden furniture manufacturers take place there today. In 2012 the monastery celebrated its 900th anniversary with many festive events. On the occasion of this anniversary a modern new gymnasium was built for the Stiftsgymnasium Seitenstetten and put into operation in the anniversary year. The total costs for the new gymnasium amounted to around three million euros. Almost half had to be taken over by the monastery, the rest was financed by donations, the federal government and the state. The Stiftsgymnasium celebrates its 200th anniversary in 2014. The new hall is considered a "birthday present".

On February 8, 2013, the 30 monks of the convent elected Father Petrus Pilsinger as the new abbot before the noon bell; the brevity of the election is an indication of his strong support in the community. He was introduced to his office on March 21st, and on Easter Monday 2013 he was ordained abbot by Diocesan Bishop Klaus Küng .

Between 1986 and 1989, nine victims were seriously sexually assaulted by a monk.