Lugosch is a redirect to this article. For the US fingerstyle guitarist, see Eric Lugosch .

Lugoj ([ lugoʒ ]; pronunciation ? / I ; German Lugosch , Hungarian Lugos , Croatian Lugoš , Serbian - Cyrillic Лугош ) is a town in Timiș County , Banat , Romania . Lugoj is the second largest city in the district after Timișoara and has been the seat of the Greek Catholic diocese of the Banat since 1850 .

Location of Lugoj in Timiș County

The city of Lugoj is located in western Romania. It lies on both sides of the Temesch river , at an altitude of 123 meters above sea level and covers an area of ​​9,855 hectares.

Lugoj is located on two important trunk roads, the European route E 70 between Timișoara - Bucharest and the E 673 from Lugoj to Ilia in the Hunedoara district . It is also an important rail hub on the Bucureşti-Timişoara line. The railway lines via Buziaș to Southern Banat and via Ilia to Deva and on to Transylvania start from Lugoj.

The place name could be derived from the terms liugas (Geto-Dacian for swamp ), Lugos (Celtic deity), locus / lucus ( Latin for place / forest ), lug / luh (Slavic for swamp ), rogoz (slav / rum. For Reed ) or lugas (ung. For arbor ). Historically determined names of Lugoj are:

Lugoj comes from "Logoj", as the town was called by the locals. Lugoj first appeared on a map printed by Lazarius Secretarius in Ingolstadt in 1528. Lugosch became a city (Civitas Nostrae Reginae Lugos) in 1542. Queen Isabella granted Lugosch the status of a Free Royal City (1551) with the usual privileges and a city coat of arms with a seated one white wolf over the crown. 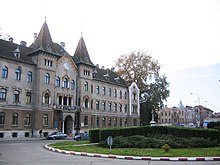 The area around Lugosch played an important role in the Dacian-Roman wars (101-106); the village of Tapia (Tapae), where a battle between Dacians and Romans took place, is now a district of Lugosch.

Lugoj was built on the site of a Roman camp. This was built in the 1st century near a Dacian fortress. The Lugoj fortress was first mentioned in papal documents in 1334. In the Middle Ages, Alt-Lugoj or Romanian-Lugoj developed on the right bank of the Timiș River .

In 1695 an Austrian army under General Friedrich Ambros Graf Veterani was defeated by the Ottomans near Lugosch , the general fell in battle. Due to the Peace of Passarowitz (1718), Lugosch came under Austrian rule.

In the 18th century it was founded on the left bank of the river Neu-Lugoj or Deutsch-Lugoj . Both market communities were connected by a wooden bridge. A new iron bridge was built by the Austrians in 1902, which replaced the wooden bridge a little further downstream.

In August 1849, Lugoj was the last seat of the Hungarian revolutionary government and the last refuge of the freedom fighter Lajos Kossuth before he fled to the Ottoman Empire .

Lugoj was one of the most important centers of the Romanian national liberation movement. In June 1848 the Grand National Assembly , chaired by Eftimie Murgu , took place on the freedom field in Lugoj. There the Romanian people stood up for their national, social and religious rights. 1892-1894 the Lugoscher Romanians took part in the memorandum movement to obtain national rights in the Austro-Hungarian monarchy.

On November 3, 1918, a national assembly took place in Lugosch, which demanded the right of self-determination of the Romanian people. After Transylvania was annexed to Romania by the National Assembly of Karlsburg ( Alba Iulia ) on December 1, 1918, based on the Treaty of Trianon (1920), Lugoj belonged to the Romanian state.

The German settlers dealt with agriculture and viticulture , and increasingly with trade and commerce . At the beginning of the 19th century there were already several craft guilds. From 1776 Deutsch-Lugosch had the privilege of holding four annual markets. Until 1793, the merger of the two districts, both market towns had their own administration.

After 1849 Lugosch experienced strong economic and cultural development. The first printing house was opened in 1852 and in 1853 the first newspaper , the “Lugoscher Anzeiger”, was published. The German grammar school existed from 1856 to 1861. The Catholic Church was built in 1733. There was a German theater since 1835. The current theater building was inaugurated in 1900. In 1889 Lugosch was promoted to town. Lugosch experienced a considerable economic boom in the interwar period, and the well-known Muschong brick factory was outstanding in the industry .

The iron bridge is a symbolic building for Lugoj, which according to old tradition is supposed to connect the German with the Romanian part of the city and is flanked by 4 toll houses. The iron structure, weighing 185,544 tons, was manufactured in the Reșița works, which then belonged to the State Railway Company , and opened to traffic in 1902.

During the communist era, the textile, ceramics, shoe manufacturing and metal processing industries developed in Lugosch.

In the period after 1989, in the course of the opening of the market, internationally active companies established themselves, initially Italian, then increasingly German companies. Well-known names such as Honeywell , Werzalit and Hella can be found among these companies . The ceramic and sanitary goods industry ( Villeroy & Boch , Mondial), the textile industry (Interspitzen, Schmidt, Textila SectiaA), the wood processing industry, shoe production ( Rieker ), food production, wine production and the production of agricultural machines are important.

New professions and a modern industrial park emerged. Today, companies in Lugoj mainly supply ceramics, shoes and clothing, toys, food, but also high-quality electronic equipment. Of the 2165 Lugoj companies, 1,943 are registered as GmbHs and 222 as stock corporations (AG), 31 of which are in the manufacturing sector, 107 in the service sector and 1,927 are trading companies. Of the approximately 15,700 wage earners, around three quarters are employed in industry, 14% in trade, 6% in construction, 2% in agriculture and 2% in administration.

The most important architectural monuments of the city are:

In 1440 Lugosch was mentioned as an oppidum and was the center of several Wallachian border districts. A hundred years later, Lugosch became a civitas and in 1551 a royal free city .

In the time of the autonomous Transylvanian principality under Ottoman suzerainty (1552–1658), the Lugoscher and Caransebes Banat belonged to the Principality of Transylvania as "partes regni Hungariae adnexae" until the Habsburg conquest. Due to the Peace of Passarowitz , Lugosch came under Austrian rule. One of the 13 district administrative offices that were established in the Banat had its seat in Lugoj.

In the course of the settlement of the Banat by the Habsburgs , the district "Deutsch-Lugosch" was created on the left bank of Temesch. After the Banat was incorporated into the Hungarian Kingdom (1778/79), the three counties were created in place of the district administrative offices: Temesch , Torontal and Karasch . Lugosch became the center of Krassó County (later Krassó-Szörény County).

In 1795 the market communities Romanian and German - Lugoj united under the name "Kamerale Kleinstadt Lugoj", whereby the two districts received a common administration.

As a result of the Treaty of Trianon , Lugoj belonged to Romania. After the administrative reorganization of 1950, Lugoj became a suburb of the Timişoara region (from 1960 Banat region ). In 1968 it became the center of the re-established Lugoj District .

Today Lugoj belongs to the Tiimiș County. The city is run by a mayor and 19 councilors. In Lugosch there is a court of first instance ( Judecătoria Lugoj ), the higher judicial authorities are in Timişoara. 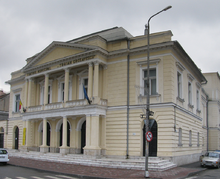 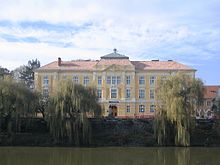 Lugosch has always been one of the musical centers of the Banat; Mozart , Haydn and Schubert's masses and other church music works were performed here while they were still alive . The Lugoscher Minoritenkirche was the cultural bearer of the city. The oldest Banat piano school to date also comes from Lugosch, dated 1760 by a monk of the Minorite monastery. The monks themselves occupied themselves with church music, piano lessons and organ building. Towards the end of the 19th century there were seven choirs in Lugosch, including four church choirs. At the same time, two important musical personalities worked here: Conrad Paul Wusching as regenschori at the Catholic parish church and Ioan Vidu at the Romanian Orthodox Church. Wusching, a Hungarian-German teacher, wrote numerous Hungarian patriotic male choirs, German songs and church music. In addition to Romanian Orthodox choral music, Vidu wrote folk song arrangements and folk compositions that were sung by most of the Romanian choirs. The first choir was built at the Lugosh synagogue, and Hazamir choirs were also established in other cities, following the example of this choir. All Lugosch church choirs also acted as choral societies, whereby their own national music culture played a priority role. Lugoj is also called the "City of Music" ( Romanian Orașul Muzicii ).

The town choir Ion Vidu has existed since 1810; In 1852 another choral society was founded under the direction of the teacher Paul Wusching. The best known musicians from Lugosch are the tenor Traian Grozăvescu (1895–1927) and the composers Tiberiu Brediceanu (1877–1968) and Walter Michael Klepper (1929–2008).

The Museum of History and Folklore , the Traian Grozăvescu Theater , the churches, the weekly papers, radio and television, the schools and the European University of Dragan are centers of intellectual, cultural and religious activity.

The House of Culture and the City of Lugoj organize, among other things:

The roots of cultural life in Lugoj lie in the school system. Special mention should be made of the two theoretical and three technical high schools as well as the European University of Drăgan with the fields of law, economics and cybernetics. It is thanks to the high level of education of its residents, among other things, that important foreign companies have settled here in recent years.

The city can also point to sporting successes. So brought Alina Goriac , Kurt Szilier , Lavinia Miloşovici in gymnastics, Iosif Horvath , Francisc Horvath and Simion Popescu in wrestling some medals at World and European Championships as well as Olympic gold in her hometown. Other sports are also practiced, such as volleyball, handball and soccer, as well as boxing and karate.

The population development of the municipality of Lugoj, including the associated villages:

From 1733 to 1735 the Roman Catholic Church was built and the monastery was erected. The parish had existed since 1718. At the same time, a denominational elementary school was also mentioned. 1759–1766 the orthodox "Maria Himmelfahrt" church was built, one of the most important buildings in the Baroque style in the Banat. The synagogue was built in 1834.