The rules for leap years in the New Julian or Orthodox calendar are:

This calendar has 7 fewer leap years in 900 years compared to the Julian calendar. With the Gregorian calendar, there are 3 leap years less in 400 years, resulting in the average calendar year length of 365.2425 days. In the New Julian calendar, with 365.242222 days, the approximation to the solar year with 365.242190 days is about ten times better than in the Gregorian calendar. The deviation is only one day after 31,250 years (Gregorian: after around 3,225 years). Striving for higher accuracy would make little sense because of the small, unpredictable changes in the rotational speed of the earth, such as those caused by magma flows in the earth's interior or by winds and ocean currents.

Most Orthodox churches use the Julian calendar to this day, dating from 45 BC. Was introduced by Julius Caesar . This was 1582 at the time of Pope Gregory XIII. reformed and gradually introduced into the Western Church . For example, the time difference for celebrating Christian festivals is 13 days in the two churches with different calendars at the moment (until 2099).

At the all-Orthodox congress in Constantinople in 1923 all participants decided to jump from March 9, 1924 to March 23, 1924 to introduce the new calendar with the above-mentioned switching rules.

On the Easter date, however, these regional churches also decided a few years later that the commonality of the date in all Orthodox churches was more important than insisting on astronomical accuracy. Therefore, the calculation of the Easter date and thus also all dependent movable feast days are based on the Julian calendar. Nevertheless, the split-off of some old calendar splinter groups from the Orthodox Church as a whole persisted in protest against the calendar change . All other festive dates (for example Christmas) are identical in the New Calendars up to 2799 with those in the Gregorian calendar.

The introduction of the New Julian calendar was and is controversial in Orthodoxy, both in terms of content and in terms of the way in which it was introduced, as described by opponents as "tricky". Only about half of the Orthodox churches have actually implemented the calendar.

It is used in the following churches:

The Orthodox Church of Finland switched its calendar completely to the Gregorian calendar as early as 1921. It also celebrates Easter on the same date as the western churches.

Difference between the Gregorian and New Julian calendars

The day of the week of a date can be specified using the Sunday letter. The latter is determined in the same way in the New Julian calendar as in the Gregorian calendar, although the assignment between the Sunday letter and the calendar year changes due to the different switching rhythm (other secular years without leap day).

Weekday
table : In the column with the Sunday letter of the year taken from the table above, the weekday series valid for this letter is shown. If you go to the right in the line for a certain day of the week, you will find the data for all corresponding days of the year. If you go to the left from a date, you will find the corresponding day of the week in the column under the Sunday letter. 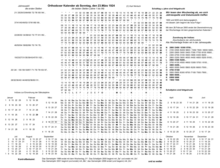 Control table for reading the day of the week