Milankovitch is a redirect to this article. For the asteroid of the same name, see (1605) Milankovitch . 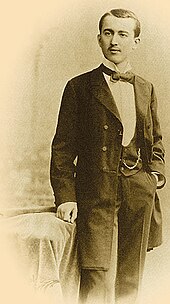 Milutin Milanković as a student

Milutin Milanković ( Cyrillic Милутин Миланковић, in the German-speaking area also Milankovic or Milankowitsch , in the English-speaking area Milankovich or Milankovitch ; * May 28, 1879 in Dalj , then Austria-Hungary ; † December 12, 1958 in Belgrade ) was a Yugoslav civil engineer , Mathematician and geoscientist .

Milanković achieved great fame in Quaternary research and paleoclimatology in 1920 through the calculation of the Milanković cycles . He also established the new calendar of the Orthodox Church .

Milanković studied civil engineering until 1902 at the Technical University in Vienna . In 1904 he received a doctorate in engineering. Later Milanković worked in the concrete construction company of Adolph Freiherr von Pittel , today's company Pittel + Brausewetter , in Vienna, which built dams, bridges, viaducts, aqueducts and other concrete structures throughout Austria-Hungary . During this time he published his "Theory of Pressure Curves", a mathematically consistent vault theory and determined the angle of fracture and the minimum thickness of a semicircular vault - John Ochsendorf was able to verify these values ​​in 2002. In 1909 he was offered the chair of applied mathematics at the University of Belgrade . This year also marks a turning point in his life. Although he continued to deal with engineering-technical concrete construction problems, he turned increasingly to basic research in astronomy and mathematics.

At the beginning of the First World War in 1914, Milanković was interned because of his Serbian nationality - first in Neusiedl am See , later in Budapest . There he was allowed to work in the library of the Hungarian Academy of Sciences, where the first manuscript on the influence of astronomical cycles on the earth's climate was written. He first published the "Mathematical Theory of Thermal Phenomena Caused by Solar Radiation" in French in 1920.

Milanković's theory became known worldwide through the inclusion of Milanković's solar radiation curve in the work “The Climates of Geological Prehistory” (1924) by the internationally renowned meteorologists Wladimir Köppen and Alfred Wegener . After this initial recognition, he was invited to contribute to two basic textbooks - the "Handbuch der Klimatologie" (1930) and the "Handbuch der Geophysik" (1933). The introduction "Mathematical climate theory and astronomical theory of climatic fluctuations" (1930) was translated into Russian in 1939. Milanković published the summary of his research in German in 1941 under the title "Canon of Earth Radiation and its Application to the Ice Age Problem". The work was translated into English in 1969 and again in 1998.

In 1955 he was elected a member of the Leopoldina .

He lived in the professors' colony in Belgrade. 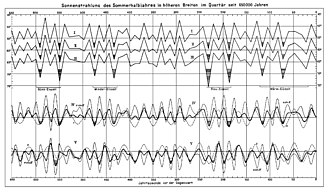 Reconstruction of solar radiation in the summer half-year at higher latitudes in the Quaternary for 650,000 years, from Köppen & Wegener (1924)

With his theory, Milanković tried to establish a connection between the Earth's radiation budget and the ice ages that occurred in the past . The radiation budget is influenced, among other things, by minor changes in the precession of the axis of rotation, the inclination of the earth's axis (obliqueness of the ecliptic ) and the eccentricity of the earth's orbit . The possible influence of these three orbital cycles and their periodic occurrence are still referred to today as Milanković cycles .

Milanković himself developed for the first time (after many measurements in the 1920s and 1930s) a formula with which these Milanković radiation curves could be calculated for each degree of latitude . The fluctuations in seasonal solar radiation are different for each degree of latitude. The same applies to the maxima and minima of the radiation curves in the northern and southern hemispheres.

In 1924, Köppen and Wegener tried for the first time to parallelize the radiation curves with the structure of the ice ages in southern Germany established by Penck and believed they had found a good match. However, later checks with more precisely calculated radiation curves could not prove this correlation .

The theory put forward by Milanković that differences in the Earth's radiation budget, which are caused by the above-mentioned variable orbital parameters, can be used as the sole reason for the Ice Ages, have proven to be incorrect. It is assumed that the initial warming , which is attributed to the changed orbit parameters , gives off greenhouse gases such as carbon dioxide , which is responsible for the further heating. At least it is undisputed that the differences in the Earth's radiation budget had a decisive influence on the climate in the past and will continue to do so in the future. In this context, his theses also play a role in relation to the greenhouse effect and global warming .