Zamość [ ˈzamɔɕt͡ɕ ] is a city in the Lublin Voivodeship in the south-eastern part of Poland . It is located around 240 km south-east of the capital Warsaw and 110 km north-west of Lemberg ( Ukraine ) in the Roztocze region .

The independent city is the seat of the district Zamość , the independent rural municipality Zamość and was the capital of the voivodeship of the same name .

The city was built from 1578 according to the ideas of the Venetian master builder Bernardo Morando in the style of the Italian Renaissance , which earned it the name Padua of the North . The Old Town is one since 1992 the World Heritage of UNESCO .

The plateau (around 200  m npm ) is rich in forest and is cut through by the Wieprz and Tanew rivers , two eastern tributaries of the Vistula . In the north - near the town of Krasnystaw and the village Skierbieszów - was in July 1915, a long trench war over in a march to the east.

The city owes its name to its founder Jan Zamoyski , who u. a. had studied in Padua and from 1576, at the time of the Lublin Union with Lithuania , held the highest state offices.

In 1720, a synod of the Ukrainian Greek Catholic Church took place in Zamość , where important decisions on the reform of the liturgy were taken. 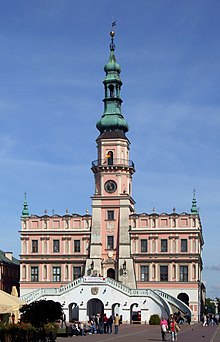 In the interwar period , the region (Wyżyna Lubelska) was almost in the center of Poland and was formerly called Volhynia , with the now Ukrainian areas east of the Bug .

During the Second World War , the region belonged to the German General Government (1939–1944), which was established in occupied Poland. The head of the district was Helmut Weihenmaier at this time . Part of the Jewish population was able to flee from the occupation, several thousand Jews were interned in the Zamość ghetto together with deported Jews and murdered in the extermination camps .

In Aktion Zamość , the Polish majority of the population was supposed to be " Germanized " by German settlers who were organized as "military farmers" in the SS Landwacht Zamosc and came mainly from Bessarabia and Croatia . In that time the city was in the plans the name Himmler city , later plow city . In 1944 the city was finally liberated by the Red Army; the region was a border area with the Soviet Union from 1945 to August 1991 , then until today border area with Ukraine.

From 1975 to 1998 the city was the seat of the Zamość Voivodeship, which became part of the Lublin Voivodeship in 1999 as part of a regional reform.

Zamość's Great Market ( pl.Rynek Wielki ), where there are many sights

The Zamość-Mokre airfield ( ICAO code EPZA) with two grass runways of 800 and 600 m in length is located on the territory of the rural municipality .