Battle of the Bzura

from Wikipedia, the free encyclopedia
Battle of the Bzura
Part of: World War II
invasion of Poland 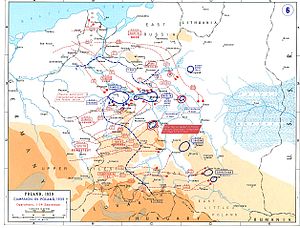 Polish cavalry brigade "Greater Poland" in the battle of the Bzura

With the Battle of the Bzura (also: Battle of Kutno ), the decisive battle in the German-Polish war between German and Polish troops took place at the beginning of the Second World War near the city of Kutno in Poland from September 9 to 19, 1939 .

Shortly after the German attack on Poland began, the Wehrmacht managed to break through the Polish lines. The German troops penetrated into the depths of Poland from the north and south-west.

In return, the Polish army managed - unnoticed by the German reconnaissance - under General Tadeusz Kutrzeba to pull together two Polish armies near Kutno north of the Bzura . When combined, the newly formed force comprised eight infantry divisions and two cavalry brigades . In order to weaken the advance of the Wehrmacht , the Poles attacked the advancing 8th Army under Infantry General Johannes Blaskowitz on the flank and in the rear. The 8th Army was thereby seriously threatened.

After the Wehrmacht had succeeded in stabilizing the situation, an encirclement of the Polish troops was initiated. The 4th Army under Artillery General Günther von Kluge attacked from the north and west . Additional support for the 8th Army came in the form of numerous tanks and fast moving units of the 10th Army under General der Artillerie Walter von Reichenau in the southeast. The Polish armed forces were encircled and the combined German forces began a major attack on September 16 with the support of 820 aircraft . After high losses and an unsuccessful attempt to break out, as well as the attack by the Soviet Union on eastern Poland on September 17th, the Polish units surrendered on September 19th. Thus the decisive and longest battle was lost, 170,000 soldiers fell into German captivity .