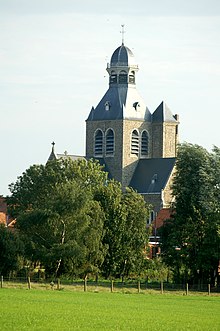 Mesen ( French Messines ) is a Belgian city ​​in the Flanders region . It belongs to the Flemish Community , the Province of West Flanders and the County of Ypres . Mesen is a community of facilities .

With a population of less than 1,000 people, Mesen is one of the smallest cities in Belgium. In addition, like Baarle-Hertog and Ixelles / Elsene , it is separated into two unconnected parts.

The Mesen / Messines monastery was founded in the 11th century by St. Adela von Messines († January 8, 1079), who was also buried here. Adelheid was a daughter of the French King Robert the Pious and mother-in-law of Wilhelm the Conqueror , also called Wilhelm I (England).

The city reached its zenith in the 12th and 13th centuries - like Lille , Ypres and Bruges - due to the cloth industry. During the First World War , the location south of Ypres was of strategic importance as a small ridge runs near it. The place was completely destroyed in the course of the battles for Ypres and rebuilt in the same place after the war. The landscape around the city was particularly drawn by the Battle of Messines (see snapshot) by explosive funnels that are still visible today . Military cemeteries and monuments to the numerous missing soldiers bear witness to the victims of the fighting. The explosion of 19 mines, with a total of around 400 tons of explosives, which the British detonated on June 7, 1917, was the largest and loudest conventional explosion in human history to date. Almost 10,000 German soldiers were killed within seconds.

Mesen and the New Zealand city ​​of Featherston have been twinned since 1975 .

About 100 years ago Mesen was still written Meesen . Lübeck , whose regiment fought there in April 1918, later named one of its barracks the Meesen barracks . The barracks as such and thus the name no longer exist today. Almost all accommodation buildings, however, still exist with civil use. The area is still commonly referred to as the Meesenkaserne. The street around the former parade yard also bears the name Meesenring .

It is believed that there are at least four undetonated mines from World War I, the largest of which is directly under a farm. Since the corridors have now collapsed or filled with water, it is no longer possible to get to the explosives to defuse them.

At Christmas 1914 Private Adolf Hitler was an orderly and reporter of the Royal Bavarian 16th Reserve Infantry Regiment in Mesen.