East Grinstead (formerly Grimstead written) is a town in the district of Mid Sussex in West Sussex , England . The town is close to the borders with counties Kent and East Sussex ; Parts of the urban area are crossed by the prime meridian .

East Grinstead was designated by the German Air Force as a secondary target for bombers that failed to bomb London . One such bombing killed 108 civilians visiting the East Grinstead cinema on July 9, 1943. No other air raid of World War II killed more civilians in Sussex.

Until 1974 East Grinstead belonged to East Sussex , but was assigned to the county of West Sussex together with Burgess Hill and Haywards Heath as part of a reorganization of the county boundaries .

The East Grinstead Town Center Master Plan was adopted in 2006 for the future urban development of East Grinstead . This provides for the renewal and partial reconstruction of the city center, the establishment of new parking facilities and support for local retailers. In addition, a bypass road should relieve the city center of through traffic. The renewal of the local train station and an improvement in local public transport with a connection to the historic Bluebell Railway are also hoped to attract more tourists to East Grinstead. The Bluebell Railway extension opened on March 23, 2013.

East Grinstead is home to a wide variety of parishes and religious groups. These include four congregations of the Church of England , four free-church faith organizations ( Baptists , Methodists , United Reformed Church , New Life Church ), a Roman Catholic congregation with a branch of Opus Dei, and a congregation of the Church of Jesus Christ of Latter-day Saints .

In addition to the aforementioned, East Grinstead is also home to the Jehovah's Witnesses , the Rosicrucians and the British headquarters of the Church of Scientology . The conspicuous accumulation of parishes and free denominations in East Grinstead caused the British television station Channel 4 to publish a documentary entitled "Why Grinstead?" (Eng. Why Grinstead? ) turn. But even this documentation did not come up with a clear answer. Speculations ranged from geographic reasons to the beauty of the surrounding landscape. 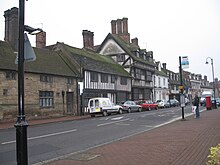 East Grinsteads High Street has the longest contiguous row of half-timbered houses in England. There are also numerous other interesting buildings such as Sackville College , the sandstone poorhouse from 1609 where John Mason Neale wrote the Christmas carol Good King Wenceslas , or the historic East Court Mansion , through which the prime meridian runs .

On the outskirts of town is Standen , an old National Trust country house with a large arts and crafts exhibition inside . A little further from the city center is the Ashdown Forest , in which the stories of Winnie the Pooh are set and which is now criss-crossed by regionally significant hiking trails.

East Grinstead was a crossing station with four branches until the 1960s. In 1959, however, the line to Lewes and in 1963 as part of the reorganization of the British rail network, the so-called Beeching ax , the route branches to Three Bridges and Tunbridge Wells were closed. Only the railway line via Oxted and East Croydon remained, via which London can be reached in under an hour. The previous branch to Lewes has been in operation again since March 23, 2013. Here now driving Museumsbahn Bluebell Railway to Sheffield Park.

The closed railway line to Tunbridge Wells was converted into a road in the 1970s and named after the Beeching ax named after the East Grinsteader Richard Beeching . The line to Three Bridges is now used as a hiking trail.

The city is located at the intersection of the two expressways A22 and A264 . The two expressways north of East Grinstead share a single lane for almost two kilometers. This bottleneck is often blamed for the city's heavy traffic.

East Grinstead offers a variety of social and sporting clubs. There is also a large sports field with the King George V Playing Fields and a recreation and leisure center with the King's Leisure Center . This leisure center includes a swimming pool as well as a gymnastics and sports hall. Finally, there are several floodlit tennis courts near Mount Noddy .

East Grinstead has partner relationships with the following cities:

The following well-known people were or are connected to the city:

East Grinstead is the target of the adulterous lovers Norman and Annie in Alan Ayckbourn's trilogy The Norman Conquests . In addition, the city appears in Christopher Fowler's novel Psychoville and is mentioned in the lyrics of the British musician Robyn Hitchcock .