This article describes the city of Gaeta; for other meanings, see Gaeta (disambiguation) .

Gaeta is an Italian city in the province of Latina in the Lazio region with 20,208 inhabitants (as of December 31, 2019). It is the seat of an archbishop .

Location of Gaeta in the province of Latina

Gaeta is 130 km southeast of Rome and 90 km northwest of Naples . The port and seaside resort is located on a hilly headland, a spur of the Monti Aurunci , on the Gulf of Gaeta, southeast of Sperlonga . The typical vegetation of the Mediterranean can be found in Gaeta. The green in the city is characterized by pine and palm trees.

Part of the district belongs to the Parco regional Riviera di Ulisse . Including the “Monte Orlando” park at the tip of the headland.

Gaeta has a typical Mediterranean climate with mild winters and warm summers. The long sandy beaches of the Serapo district are frequented by bathers from around April to October.

The districts of the municipality are Areanuta, Ariana, Fontania, Quattro Remi, Sant'Agostino, San Vito and Serapo. The municipality extends over a height of 0 to 491  m slm

Gaeta is a member of the Comunità Montana dei Monti Aurunci .

The community is located in earthquake zone 2 (medium risk).

The neighboring municipalities are clockwise Itri and Formia .

Panorama of Gaeta and its gulf 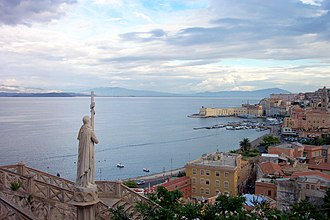 Gaeta was already quoted by Virgil in the Aeneid (journey from Aeneas to Rome) . It is the place where Aeneas his nurse Caieta buried according to the legend. The ancient name Caieta is said to be derived from it. According to Strabo , the name comes from the laconic word for shoals (Καιέτας). The natural harbor was frequented very early on. The ancient Caieta gained great importance for maritime trade in the Middle Ages. From the middle of the 4th century BC He came into the Roman sphere of influence and developed into a popular health resort with numerous villas. Among other things, Cicero and Antoninus Pius owned villas here. The tomb of the Roman consul Lucius Munatius Plancus (early 1st century AD) and the pilgrimage church of Montagna Spaccata are located on Monte Orlando .

In the Middle Ages, under the rule of the Caetani , dukes of Gaeta, the city secured its independence from popes and emperors as well as neighboring kings and dukes, including through an alliance with the Saracens from Garigliano .

Pope Pius IX found refuge here in 1848 after rebels drove him from Rome during the Italian Risorgimento.

The last king of the two Sicilies , Franz II , was expelled here by Garibaldi in 1860 and withstood the siege with his last troops, commanded by General Felix von Schumacher , for several months. Due to its geographical location, Gaeta served as a sea fortress until World War II .

The flagship of the US Navy’s 6th Fleet has been stationed in Gaeta since 1967 . Currently this is the USS Mount Whitney (LCC-20) . She is subordinate to the US fleet command ( Naval Forces Europe-Africa / 6th Fleet ) in Naples , where the formerly more important base of the 6th Fleet is also located. 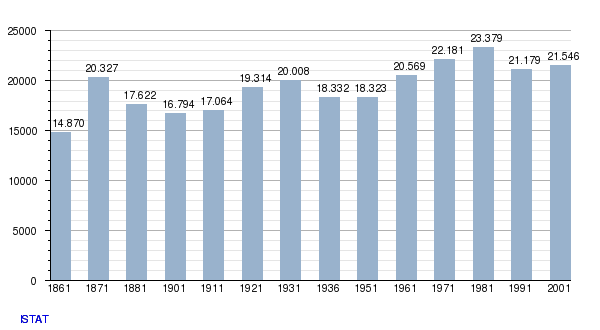 Cosimo Mitrano ( PdL ) was in the runoff election on 20./21. Elected Mayor in May 2012. He defeated his predecessor Antonio Raimondi (left citizen list) with 64.1%. Mitrano's center-right coalition also has the majority in the local council with 10 out of 16 seats.

The city's coat of arms is a four-part shield with alternating silver and red fields. The coat of arms goes back to the Caetani family from Gaeta . 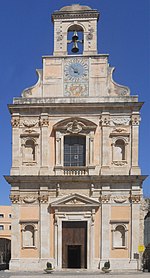 Facade of the Santissima Annunziata of Gaeta

Gaeta is an important seaside resort between Rome and Naples. In August, the city's population tripled due to the presence of mostly Italian vacationers. Only about 5% of August vacationers in Gaeta are foreigners. The “Gaeta vecchia” district is particularly popular with its medieval castle, narrow streets, old churches, as well as the cathedral and monastery. There are also many small restaurants and bars there. Two kilometers in the direction of Sperlonga, on the “Via Flacca” that runs along the coast, is the “Disco Mile” with dozens of discos; most of them between the slope and the beach.

Historical remains from ancient times are tourist attractions. The baroque church of Santissima Annunziata is famous with the so-called "golden grotto" ( grotta d'oro ), which is located directly on the promenade. One of the most famous buildings is the Romanesque cathedral , built around 1100 , which was expanded to include the campanile in the 13th century . The medieval fort (8th century), which is now used as a state prison, rises above the old town .

The Gaeta Jazz Festival has been held in Gaeta every year since 2008. Back then more than a private pleasure, the festival is now a respected musical event at which renowned and internationally known jazz musicians such as Roberto Gatto and Roy Hargrove perform. The highlights of the festival are concerts that take place in the courtyard of the medieval castle. The actual festival takes place in summer, but there is now an expansion of the festival to include the winter under the name "Gaeta Jazz Winter".

Municipalities in the Province of Latina in the Region of Lazio