During his long reign he strove to strengthen his kingdom internally and emerged as a legislator and promoter of the church. He expanded the royal power and was able to temporarily bring the two semi-autonomous duchies of Spoleto and Benevento under his control. He used the weakening of the Byzantine position in Italy during the Iconoclasm to expand his empire territorially, then renounced his conquests in the Ducat of Rome and other Roman ecclesiastical property in favor of Pope Zacharias . Under his rule the Longobard Empire reached the height of its power.

Liutprand was the younger son of the Ansprand and Theodorada. After the death of King Cunincpert in 700, Ansprand became regent for his underage son and heir to the throne Liutpert . On the other hand, eight months after the death of Cunincpert Raginpert , the Duke of Turin , rose up, who was able to prevail against the claim in the Battle of Novara . Raginpert died in 701, but his son Aripert II became king.

In the battle of Ticinum ( Pavia ), Aripert II defeated King Liutpert's army under Ansprand, Ato, Tatzo, Rotharit and Farao, took Liutpert prisoner. Gegand fled to the Bavarian court, where dux Theudebert welcomed him benevolently. The young Liutpert was murdered by Aripert in 703 as a potential rival to the throne. Ansprand's family was mutilated: his son Sigiprand's eyes were gouged out, his wife Theodorada and daughter Aurona had their nose and ears cut off, and only Ansprand's little son Liutprand was allowed into exile with his father.

In 712, Theudebert provided an army with which the Anfand and Liutprand moved across the Alps. At Pavia there was a battle with Aripert's army. This had obviously not yet been decided, so Aripert left his army in the evening to spend the night in the palace. The army felt betrayed and mutinied. Aripert fled from Pavia and drowned in the Ticinus , which he wanted to swim through laden with treasure. Anfand was able to succeed him unchallenged, but died three months later. On June 13th, Liutprand was crowned king.

In the year 712 he came before an attempt to kill his consanguineus (blood relative) Rothari and killed him. Liutprand had his four sons executed. Two of his armigeri (weapon bearers) planned another attack. When confronted by Liutprand, they confessed their guilt and were pardoned. This initially secured Luitprand's kingship. In Italy there were four competing political powers: the king, the semi-autonomous ducats Spoleto and Benevento, Byzantium and the growing papacy. In this environment Liutprand wanted to become king of all of Italy. Liutprand came to an arrangement with Romuald II of Benevento by giving him his niece Gumperga as his wife around 715.

Faroald II , the dux of Spoleto, conquered the Byzantine city of Classis on his own initiative in 716, but had to evacuate it again at Liutprand's behest. Lombards from Benevento conquered the Byzantine Cumae under Romuald II in 717, but were driven out again after some time by the dux of Naples on the intervention of Pope Gregory II . Around 720, Luitprand confirmed the donations made by Aripert II in the Cottian Alps to the church.

Liutprand had been associated with Bavaria since his exile. After the death of Duke Theodo in 717, he intervened in disputes within Bavaria on behalf of his relatives. Around 715 he married the Bavarian princess Guntrud , with whom he had a daughter. Around 725 he intervened again with Karl Martell in Bavarian affairs, conquered several cities and moved the Lombard border northwards to Magias (Mais near Meran ).

Slavic tribes attacked Lauriana in Friuli, but were repulsed by dux Pemmo . The Lombards conquered the Byzantine Narnia ( Narni ).

Liutprand bought the bones of St. Augustine of Hippo from the Saracens and brought them to Pavia.

The Byzantine Emperor Leo III. forbade the worship of images in 726 and ordered the removal of all sacred images from churches. The emperor's anti-image edict led to revolt against Byzantine rule in the Vatican and in the Longobard Empire. Pope Gregory II condemned iconoclasts at a Roman synod. Liutprand besieged Ravenna and destroyed the Byzantine naval port Classis . The patricius Paulus from Ravenna sent troops against the Pope, which were pushed back by Lombard armies. Liutprand conquered the Byzantine cities Feronianum ( Frignano ), Mons Bellius ( Monteveglio ), Buxeta ( Busseto ), Persiceta ( San Giovanni in Persiceto ), Bononia ( Bologna ), the Pentapolis (Rimini, Pesaro, Fano, Sinigaglia and Ancona), Auximum ( Osimo ) and Sutri , which he is said to have given Pope Gregory II a little later; an anticipation of the Pippin donation on a small scale. Thomas Hodgkin takes the view that the cities more or less voluntarily submitted to the protection of Liutprand in order to evade the conflict between Pope and Byzantium.

In 727 the exarch Paul was killed. His successor, the eunuch Eutychius , landed near Naples and allied himself with Liutprand after an unsuccessful attack on the Pope around 730. Liutprand wanted to subject Spoleto and Benevento to his influence and gave the exarch a free hand for Rome. He subjugated Transamund II , the Duke of Spoleto , and then marched on Rome, where he reached an understanding between Pope Gregory II and the exarch Eutychius. He concluded treaties with the Byzantine cities of Venice and Comacchio .

When Pemmo, the dux of Friuli, captured the patriarch Calixtus around 731, he fell out of favor and Liutprand appointed his son Ratchis as dux . Pemmo fled with his followers to the Slavs until Ratchis could persuade the king to reconcile. Pemmo and his sons Ratchait and Aistulf were pardoned, the other offenders were imprisoned.

Romuald II of Benevento died around 730. Liutprand defeated the usurper Audelahis around 732 and appointed his own nephew Gregorius as dux . He took Romuald's underage son Gisulf II to Pavia, where he raised him like a son.

He was looking for good relations with the Franconian Empire , where in 719 the caretaker Karl Martell had established himself as the real ruler. Karl's son Pippin was adopted by Liutprand in 734/37. Karl Martell was married to Sonichildis, a cousin of Liutprand's wife Guntrud. When Karl Martell asked Liutprand in 737 to help him against the Saracens in Provence , he declared himself ready to help with weapons. Liutprand's nephew Hildeprand was able to take Ravenna around 737, but lost it again to the Venetians around 740.

Renewed unrest in Spoleto and Benevento 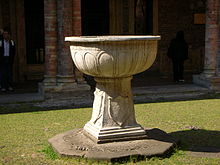 The “Pilatus Basin” in the “Pilatushof” Basilica Santo Stefano in Bologna from the 8th century bears the names of kings Liutprand and Hildeprand and Bishop Barbatus in an inscription.

Liutprand's goal to take Rome was apparently not given up. The threat to the papacy in Rome persisted and worsened. Dux Godescalc had succeeded his late nephew Gregorius without the king's consent. The duces Godescalc of Benevento and Transamund II of Spoleto allied themselves in 739 with Pope Gregory III. Liutprand advanced with an army in 739 and Transamund fled to Rome. In June 739, Liutprand deployed Hilderic as dux in Spoleto . Hildeprand took advantage of his uncle's illness to seize power himself. However, the king soon recovered and made Hildeprand a co-king in the government. The Pope's call for help to Karl Martell in 739 went unheard in view of his friendship with Liutprand. Thus the Pope had to negotiate on his own with Liutprand, whose position had been weakened by the uprising of his nephew Hildeprand and by the ongoing struggle with Spoleto.

In December 740, Transamund II returned to Spoleto and killed the Hilderic employed by Liutprand. Liutprand's advancing army was attacked by a Spoletan-Byzantine army in 742 between Fanum ( Fano ) and Forum Simphronii ( Fossombrone ). Dux Ratchis of Friuli and his brother Aistulf brought up the rear with their men and covered the advance. Liutprand managed to depose Transamund and force him to go to the monastery; his duchy fell to Agiprand . Godescalc was killed by the Beneventers on the run and Liutprand put his nephew Gisulf II. As dux.

Liutprand made his peace with Pope Zacharias in 742, renouncing his conquests in the Ducat of Rome and other Roman church property. The Pope was also able to dissuade him from a planned campaign against Ravenna.

Liutprand died in January 744 and, like his father, was buried in St. Adrian's Church in Pavia. He was first succeeded by his nephew Hildeprand, who was replaced by Ratchis that same year . In the 12th century he was reburied in the church of San Pietro in Ciel d'Oro, which he had built . Further evidence of his building activity are the monastery of St. Anastasius in Olonna and the monastery in Bercetum.

Under Liutprand, Longobard law was expanded through annual statutes. He held annual popular assemblies to approve his laws. As a result, the Lombard popular law developed into one of the most extensive and approached case law . The Liutprandi Leges were in part directed against paganism, heresy and apostasy: Thus, in 727, fortune-telling was banned. Fortune tellers were sold abroad as slaves. Magic and worship of trees and springs were punished with a fine in the case of the free, and with sales abroad in the case of maidservants.

By law, he regulated the hierarchy of offices of the dukes and Gastalden as royal officials in the cities, to which the mayors , Decani and Saltarii were subordinate as heads of villages and smaller rural districts. He proclaimed a country peace and forbade feuds . Selling freemen abroad as slaves was prohibited.

In inheritance law, there was an approximation of Roman law: if there were no legitimate sons left, the legitimate unmarried or widowed daughters inherited. Other relatives were excluded from the inheritance, especially illegitimate children. In Lombard law, however, not all those capable of inheritance could inherit at the same time and in equal parts, but only one after the other.

In marriage law, he lifted the ban on mixed marriages between Romans and Lombards. The amount of the morning gift was limited to a quarter of the husband's fortune. Women were given a “right of consent” when choosing a husband.