The Osireion (also Osirion or Osiron ) in Abydos , Egypt is a small temple complex that was built in honor of the ancient Egyptian god Osiris . It is located to the southwest immediately behind the mortuary temple of Seti I and was built like this in the time of the New Kingdom . Earlier assumptions that the Osireion was a royal tomb or a sham tomb are rather improbable according to recent studies. The temple character is just as clear in the sacrificial rites performed as in the type of decorations.

The Osireion complex was discovered in 1902 by Margaret Alice Murray and Flinders Petrie . The uncovering took place until 1926 under Henri Frankfort . The structure of the temple is reminiscent of the royal mortuary temples of the Fourth Dynasty , but dates from the time of Seti I. The decoration continued until the time of his grandson Merenptah . The name Sethos I is recorded on dovetail-shaped building clips that held the massive granite blocks of the main hall of the Osireion together. Building materials from before the Nineteenth Dynasty were not found.

Originally the Osireion was covered by a barrow , surrounded by rows of trees. The entrance was in the west of the facility. From there a long, downward-going corridor led southeast into a rectangular chamber with a narrow room beyond. Paintings were placed on the walls of the corridor depicting the “ Book of the Caves ” on the northeast side and the “ Book of the Portals ” on the opposite wall . Both describe the nocturnal journey of the ancient Egyptian sun god Re through the underworld. Under Merenptah, at the southern end of the Ganges, the paintings were started as bas-reliefs.

Further bas-reliefs from Merenptah's time can also be found in the rectangular chamber, its adjoining room, as well as the corridor leading north-east from the chamber and the rear wall and the architraves of the adjoining transverse hall in front of the main hall with the surrounding moat. The corridor from the entrance chamber to the first temple hall is sloping like the described corridor, so that the water in the underground temple moat could be fed by groundwater. Today the entire temple floor of the Osireion is under water. From the first hall, built of red granite blocks, a gate with a still existing lintel led into the main hall with two rows of five large pillars each on the artificial island surrounded by water. The Osireion thus had the arrangement of Egyptian temples, which is customary according to the “ Book of the Temple ”, each of which had a sacred hill.

From the center of the temple, steps led down to the north-east and south-west of the moat. Between these on the artificial island, two shallow pits, one rectangular, the other square, are carved out. Possibly they were intended as a location for a sarcophagus and a canopic shrine . Sixteen niches were embedded in the outer walls around the ditch, six each on the long sides and two each next to the hall entrance and the wall opposite it. In the center of the latter, a low door led into a second transverse hall behind it, which had no further access. Here, high reliefs on the ceilings and walls show the " Book of the Nut " and the " Book of the Night ", framed by two depictions of the sky goddess Nut . The door to this last hall is so low that it is completely flooded by the water in the main hall, which may have been planned when the moat around the center of the temple was built.

Only a few parts of the roof of the Osireion are preserved today, so that one has a good view of the formerly underground temple complex from above. The huge monumental building explains the great local importance of Osiris in Abydos, which was also considered one of the burial places of Osiris. 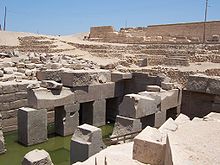 South view of the Osireion

On the walls and the ceiling, cosmological texts from the sky books and deans were attached. The north, south and east walls are so destroyed that reading is no longer possible. Remnants of the Book of Earth can still be seen on the west wall . The ceiling spans the western sarcophagus and eastern embalming hall . The groove book is shown in the western half , while the book of the night is shown in the eastern half .

In the southern room, on the east, south and west walls, the “ Spruch von den 12 Grüften ” is attached as the 168th chapter of the Book of the Dead . The associated vignette shows the three phases of the sun god Re , which were already documented in the pyramid texts . Even in the oldest evidence from the reign of Amenophis II , “7 tombs” are no longer available as a text. Only in the Osireion was an attempt made to reconstruct the tombs schematically as a unit.

Subject areas noted on the wall: Osiris and Horus, title of Osiris, Merenptah. The area referred to as the "entrance from the temple" leads to the larger part of the building, which was discovered and excavated in 1914 by Edouard Naville.

In the 1902/03 season, Flinders Petrie had his wife Hilda responsible for the excavations in Abydos. Also present were Margaret Murray , whose skills were important on religious texts for copying, as well as the artist Miss F. Hansard for the drawing of the reliefs. The three women took over all the necessary aspects of the company. In the previous season, St. G. Caulfeild (Algernon St. George Thomas Caulfield) had partially exposed the long corridor inside the enclosure wall . The great masses of sand that were removed had left a huge furrow like a natural ravine.

The way this large hypogeum was constructed made it fairly easy to suspect another underground building underneath, although the depth at which it must lie would make it impossible to expose more than a small portion of it. It is the nature of the desert that after 60 - 120 cm of blown sand you come across hard marl . This is as hard as rock. The old builders took advantage of this by digging out corridors and halls with steeply sloping, almost vertical, sides, then covering them with large stone blocks as a roof and filling the hole at the top with sand. The entire structure could no longer be seen from the outside and was therefore well hidden. The researchers therefore had to dig test shafts from the marl within the temenos wall, which without exception showed that the marl was hewn vertically to enable building underneath.

After three unsuccessful attempts, in which they only ever encountered sand, they found some large sandstone blocks at a depth of 5 m. Margaret Alice Murray also discovered a kind of door behind which, after a few meters, they came across the floor of a room. After the discovery of a cartouche from Merenptah it became clear to everyone that they had discovered a structure without a counterpart previously known in Egypt. Afterwards the “Great Hall” and a sloping corridor were found. Since then Margaret Murray has been known as the “discoverer of the Osireion”.

“We spent three weeks looking for a place where there might still be a roof, and we were confused by the right angle turns this approach seemed to make. Now we know that these "bends" were carved out of the rock to serve as supports for rooms and halls. We hoped to find a place where the roof was still in order. For days I carried candles and matches in my pocket, ready to slip through a large enough passageway - but they were never needed. Throughout this excavation, it was always the unexpected that happened. If we expected to find a corridor, we found rooms and halls; if we hoped for a full roof, the roof was completely removed; if we expected a grave, we found a place for worship. "

With the excavation season nearing its end, they could not do any further research. Flinders Petrie also said that the BSAE did not have enough funds for such a large undertaking, that is, removing the masses of sand and rock at about 9.50 m (40 ft.) Depth over the entire structure. So he hoped that the Antiquities Service under Gaston Maspero would be ready to excavate and preserve this unique hypogeum of Osiris as part of the great temple that was already one of the main attractions in Egypt. It was not until 1914, however, before Edouard Naville was able to dig here again for the Egypt Exploration Society and finally until 1925 when Henri Frankfort excavated today's "Osireion" with the help of a steam engine.

“I could only copy a very small part of the inscriptions because - although we had cleared the corridor to the ground - a strong wind blew everything back up within two days. The whole excavation was greatly delayed by violent sandstorms that sometimes brought down half a ton of sand and stones. Sitting in a pit under irregular but continuous fire of small stones and the chance of getting a larger stone was an experience that is only funny in retrospect. "

"The carefully prepared study of Osiris published by Miss Murray will hopefully serve to clarify and bring out the various aspects and connections of one of the important deities of Egyptian worship and belief."

- Flinders Petrie in the preface : Margaret Alice Murray: The Osireion at Abydos