Sesostris III. ( Greek name ) ruled from around 1882 BC. BC (beginning of co-reign) to around 1842 BC As an ancient Egyptian king ( pharaoh ) of the 12th Dynasty ( Middle Kingdom ). Sesostris II had made him co-regent on 1st Achet I , seven and a half months before his death ( 14th Peret IV ).

In the royal papyrus Turin the duration of his rule is given as 3 [X] years , which is why a maximum reign of 39 years would be possible. With the beginning of his 20th year of reign, Sesostris III. his son Amenemhet III. to co-regent.

After the death of his father Sesostris II, Sesostris III took over. an empire strengthened within. One of his first measures was the renovation of the " Unas " Canal, the shipping route through the 1st cataract . The king conquered other parts of Nubia and extended the empire to the 2nd cataract, where he built a border barrier at Semna . During his reign, the power of the provincial princes was severely curtailed, because one can no longer find any feudal tombs of the princes.

Statue head of the king in the Luxor Museum

The data list of the deans in the Nutbuch shows a processing in the Middle Kingdom under Sesostris III. in his seventh year of reign, which coincides with the naming of the heliacal rise of Sirius on the 16th Peret IV in the same year and initially roughly to the period 1900 to 1850 BC. Is to be narrowed down. The correctness of this information can be assumed to be certain due to the different calculation methods used by several Egyptologists .

Assuming that Memphis was chosen as the reference point for the Sirius observations, only the years 1875 to 1872 BC are for the heliacal ascent on 16 Peret IV and thus for the seventh year of reign. Possible. Taking into account the information provided by the royal papyrus Turin, the lunar calendar dates and the ninth year of Amenemhet IV's reign , Wolfgang Helck and Winfried Barta name the seventh year of reign 1875 BC. BC, while Jürgen von Beckerath and William J. Murnane 1872 BC. Begin. 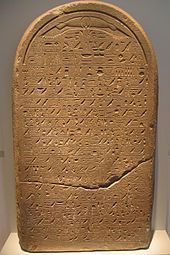 In Semna there was a large fort that secured the border with Nubia. On the Semna stele there is a detailed instruction for dealing with strangers: “The southern border, the eighth year of the reign of the King of Upper and Lower Egypt Cha-ka'u-Re (Sesostris III.), Who is forever and ever with Life is bestowed, was set in order to prevent any Nubian from crossing it northwards by land or by ship, as well as all herds of the Nubians, except one Nubian who comes to trade in the fortress of Iken (Mirgissa) or as a messenger . Everything you do should be (in) good (agreement) with them, but without allowing a Nubian boat to pass Semna northwards forever. "

For Sesostris III. at least three, maybe even four campaigns to Nubia are recorded. There is also evidence of campaigns to Palestine . The first campaign took place in his eighth year of reign and can be deduced from two inscriptions. On the small island of Sehel a little south of Aswan there is a rock inscription that reports on the construction or renovation of a canal. The eighth year of the ruler's reign also dates from a stele that was found near Semna and explicitly states that the Nubian border was established here in Semnah in the eighth year of the king. The next campaign took place in the year 10 of the ruler. Again, various inscriptions indicate this without any details being known. An inscription near Aswan dates back to the year 10 and only briefly reports that the ruler moved to Nubia. More important are two inscriptions that were found near Dal, about 83 km south of Semna and date to the tenth year of the ruler (only one inscription explicitly mentions his name) and testify that the campaign advanced into this area. But it did not lead to any further conquests, since the border remained at Semna. Another campaign took place in the year 16. The so-called large Semna stele is dated to this year . It begins with the sentence: Year 16, 3rd month of the Peret season, His Majesty set up the southern border at Heh . The last campaign finally took place in the 19th, the last (own) year of the ruler's reign. Again, not much is known about the campaign and it is only mentioned briefly in a few inscriptions.

In the Al-Lahun - papyri are from the reign of Sesostris III. receive the following new moon dates :

Two viziers date with certainty under Sesostris III: Sobekemhat and Nebit . They are both known from their mastabas , which were found next to the pyramid of the king in Dahshur. A third vizier, Khnumhotep , possibly already dated under Amenemhet III. Several treasurers can be classified under the ruler. Sobekemhat held this title before he was appointed vizier. Senanch dates back to the eighth year of the ruler and had a canal dug at Sehel . Iychernofret dates to the end of the reign and judged for Sesostris III. the Osiris celebrations in Abydos .

In Medamut , northeast of Karnak , there has been a sanctuary of the god of war Month since the Old Kingdom . At this point Sesostris III. erect a new Temple of the Month, mainly made of adobe bricks. Only the doors and pillars were made of limestone. The temple was 65 m × 100 m in size and the surrounding wall was 5 m thick.

Sesostris III. built a pyramid near Dahshur in several construction phases completely from mud bricks, without the stone ribs usual with his predecessors. With a side length of 106.70 m, it was originally 65.50 m high (according to Mark Lehner 78 m high). Amazingly, the entrance to the pyramid was in the west. The granite sarcophagus of the king was found in the tomb not in the center . For the first time, the burial chamber was not protected by falling stones. 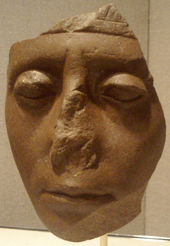 Portrait of the ruler

At Abydos (Araba el Madfuna) Sesostris III. his " Osiris grave". The valley temple was on the edge of the desert, an approx. 700 m long path led to the grave district, which formed a T-shaped brick platform: 156 m wide and 160 m long. In the northern part, two shafts led into the 24 m deep grave. The 180 m long grave corridor was closed with granite and quartzite slabs. The actual coffin chamber was hidden away. The elaborate system suggests some Egyptologists that Sesostris III. was not buried in its pyramid but here.

The tombs in the pyramid district of Sesostris III. in Dahshur were looted as usual. Within the pyramid complex, de Morgan found a gallery grave with various burials in 1894. He found pieces of jewelry at that of Sit-Hathor, perhaps the daughter of Sesostris II, as well as at the funeral of Princess Meret.

Sesostris III. is easy to see on all of his statues: his facial features appear melancholy, the corners of his mouth are turned downwards.

In total there are over 100 portraits of Sesostris III. known, but very few are intact. One of the most famous almost intact sculptures is the king's sphinx (New York, Metropolitan Museum of Art, inv. No. 17.9.2). For the first time the so-called prayer statue appears under this king. Figures of this kind are usually life-size and show the king in a gesture of prayer, in which he has placed both hands flat on the pleated porch apron.

Sesostris III. appears in later sources as one of the great pharaohs, although it is not always clear whether the information given by later historians relates to his deeds or whether deeds and legends of different pharaohs were associated with him. Herodotus (II, 102–104) reports on the conquests of Sesostris as far as Thrace and the Red Sea. He also tells of steles that the ruler erected in the conquered areas. According to Manetho , he is said to have subjugated all of Asia and in Europe to have come to Thrace. Manetho also reports on the stelae. Even John of Nikiû (XVII, 1) reports n. Chr in the 7th century. That he surveyed the country, moved in taxes and made prisoners.