Probably at the beginning of the 45th year of reign on 1st Achet I 1798 BC. Chr., He appointed his son as co-regent, Amenemhet IV. (In the Turin King List are four [X] years specified). In the 43rd year of the reign, the last of 18 Nilstands brands from the Semna / Kumma region bearing his name falls ; in the Lahunpapyri a year 46, 3 month of the Achet season is recorded.

The wives are Aat , who presumably died at the age of around 35, and Chnumneferhedjet , who was not older than 25 years. Another wife and mother of the heir to the throne was Hetepti . His daughters include Neferuptah and Nofrusobek , Pharaohs after Amenemhet IV, and perhaps Hathorhetep .

According to recent research, Amenemhet III. about twenty years together with his father Sesostris III. to have ruled. While the father was active in foreign policy through campaigns, the son helped Egypt flourish domestically. Under his rule, the water regulation in the " Moeris Lake " came into effect, which led to new areas for agriculture in the Fayyum oasis , and made him the legendary king "Moeris".

The court of this pharaoh is not very well documented. A vizier named Chety can be dated to the reign of the ruler from a papyrus from El-Lahun ; perhaps the viziers Khnumhotep and Ameny also served under this regent. Iychernofret in his function as treasurer at the beginning of the reign of Amenemhet III is considered certain .

A rock inscription near the port of Ain Suchna on the Gulf of Suez tells of an expedition in the 2nd year of Amenemhet III's reign. to the Sinai Peninsula and names several participants.

Amenemhet III. had two pyramids built. His first pyramid near Dahshur , the limestone cover of which was lost early on, is also called the "black" one. It measured about 105 m square and was maybe 75 m high with an angle of repose of about 55 °. In an extensive and peculiarly branched system of corridors in the pyramid underground there is a small Anubis sanctuary and the royal burial chamber with the unused sarcophagus made of red granite .

Substructure of the " black pyramid " in Dahshur

This "black pyramid" of Amenemhet III. probably showed subsidence even before its completion, which led to cracks in ceilings and floors. Support ceilings and beams made of cedar wood were installed in six unfinished rooms and corridors, and cracks in the walls were plastered. The chambers of two queens were lined with an additional layer of stone for reinforcement. When these burial chambers were found in the 19th century, they were robbed; the remains of the grave equipment testify to the considerable wealth of the burials. In 1900 the 1.40 m high pyramidion , the pyramidal keystone made of granite (base 1.85 m × 1.85 m) was found in the rubble of the pyramid in Dahshur .

Because of the serious deficiencies in the first structure , a second pyramid was built for the pharaoh at another location, in Hawara . This pyramid of Hawara was also built from the usual mud bricks , but over a rock core approx. 12 m high, and clad with limestone. Its base was - as in Dahshur - about 105 m × 105 m, its height less than 60 m (inclination less than 49 °). From the entrance on the south side a system of corridors led to the burial chamber of Amenemhet III. The pyramid of Hawara was preceded by the so-called labyrinth , which the Greek geographer Strabo (63-20 BC) described in detail and praised as a wonder of the world. This was the mortuary temple of Amenemhet III, which according to old reports should have had more than 1500 rooms. 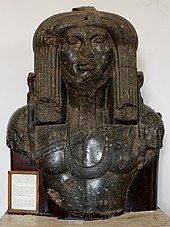 Head of a colossal statue of Amenemhet III. in the priest's robe with a panther skin from Fayyum

Although the pyramid of Hawara was also designed as the burial site of Amenemhet's daughter Neferuptah, she was not buried there. Her grave was found untouched in 1956 in a crumbling adobe pyramid two kilometers southwest. However, penetrating moisture had led to the decomposition of wood and the mummy , but the granite sarcophagus and the rest of the grave equipment could be salvaged and partially restored.

In Biahmu in Faiyum Oasis of the rulers built two colossal statues .