Plan of the pyramid district

The Hawara pyramid is the tomb of the ancient Egyptian king Amenemhet III. from the 12th dynasty in the Middle Kingdom . It forms the center of the necropolis of Hawara , near the modern town Hauwaret el-maqta . Its construction began in the 15th year of the king's reign after his original grave monument in Dahshur had to be abandoned due to serious structural defects. With a side length of 105 meters and an incline of 48 ° 45 ', the Hawara pyramid had a height of 58 meters. It was the last major structure of its kind to be completed. The current height of the ruin is about 20 m.

The first documentation of the pyramid was carried out by John Shae Perring in 1839 . The publication took place in 1842 by himself and by Richard William Howard Vyse . Karl Richard Lepsius visited Hawara during his Egypt expedition 1842–1846 and documented the ruins there between May and July 1843. He added the Hawara pyramid to his list of pyramids under the number LXVII . He identified the remains of the labyrinth and arranged the complex Amenemhet III. to. His attempts to get inside the pyramid were unsuccessful. Even Luigi Vassalli failed to do this when he tried again in 1862.

From 1888 the English archaeologist Flinders Petrie carried out extensive excavations in Hawara. While the first excavation season was in the surrounding cemeteries, he examined the pyramid in 1889 and penetrated into the chamber system. After turning to other sites in the meantime, Petrie returned to Hawara in 1911 and carried out excavations in the area of ​​the labyrinth, which, however, did not clarify its original appearance because of the severe degree of destruction. In later times there were some Egyptian excavations and in 2000 a survey in the area of ​​the labyrinth by Inge Uytterhoeven and Ingrid Blom-Böer from the Katholieke Universiteit Leuven .

This building was also built entirely from adobe, but with a flatter angle of slope . As usual, the outer jacket was made of limestone . The original limestone cladding has been missing since ancient times, and the pyramid core is increasingly suffering from erosion . 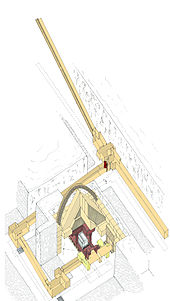 The entrance is offset to the west on the south side, but it has now been buried. A staircase leads approx. 40 m down and leads into a small chamber from which a short corridor leads off, which ends as a dead end. In the upper part of this cul-de-sac is the entrance to another passage, which should be blocked by a 20 t granite barrier. Behind this is another chamber, from which two corridors branch off. The first course leads directly north and put an end to the research drive in water and mud. The second passage leads east towards the center of the pyramid and ends in another chamber. Again hidden in the ceiling and provided with a falling stone, the corridor now turns north again. The same construction follows in the northeast corner, but here the passage has been closed by the barrier. Behind this barrier it goes on to the antechamber, in the south wall of which a recess leads to the actual burial chamber.

Petrie discovered the royal quartzite - sarcophagus in the form of a tray of 7 x 2.5 x 1.83 m, carved from a single block having a weight of about 110 t. The sarcophagus, two canopic chests and a smaller sarcophagus were brought in before the burial chamber was completed. Although the burial chamber was under water when it was found, Petrie reports bone finds in the coffins. In the antechamber a sacrificial plate made of alabaster was found, which is inscribed for Princess Neferu-Ptah and which was then taken to be the owner of the second sarcophagus. The burial chamber was constructed in such a way that it could only be closed once by means of a sand drainage device with which the mighty quartzite slab was lowered onto the chamber.

Similar to the Djoser pyramid in the 3rd dynasty , the Hawara pyramid is located in a rectangular pyramid district 385 m long and 158 m wide, which was laid out north-south. The pyramid stood in the northern part, the entrance to the district was at the southeast corner of the courtyard, where the access road ended. There was a mortuary temple between the entrance and the pyramid, the structure of which may have been unique. The Greek geographer Strabon (63-20 BC) described it in detail and praised it as a wonder of the world. He compared the more than 1500 rooms with the labyrinth of Minos . Since Roman times, however, the mortuary temple has served as a quarry, so that today only the foundations can be seen. Herodotus spoke of covered courtyards, Pliny the Elder recognized lower-lying rooms. In the course of the excavations carried out by Petrie, the remains of two granite chapels, each of which contained two sculptures of the king, came to light on the south side of the pyramid. Numerous fragments of statues testify to a formerly splendid interior.

The tomb of Princess Neferuptah was discovered about two kilometers south of the pyramid in 1936 and excavated in 1955. In addition to the granite sarcophagus, valuable grave goods were found in the complex . Due to this find, however, the burial place of the Neferu-Ptah within the coffin chamber of the pyramid is again called into question.