Location of Lepsius XXIV in the Abusir necropolis

The Lepsius XXIV pyramid is a pyramid that was probably built for a wife of King Niuserre . The heavily destroyed structure of the 5th Dynasty is located on the pyramid field of Abusir , east of the unfinished pyramid of King Raneferef and south of the pyramid of Chentkaus II.

On his Egypt expedition from 1842 to 1845, the German Egyptologist Richard Lepsius located a small pyramid complex and gave it the serial number XXIV (24) in his list of pyramids . Ludwig Borchardt , who examined the necropolis of Abusir sixty years later , saw a mastaba or double mastaba in these ruins and paid no further attention to them.

With experimental excavations in 1980–81, 1987 and 1990 and a complete excavation in 1994, a Czech team led by Miroslav Verner examined the complex more closely and identified a pyramid with a secondary pyramid and a mortuary temple that was built at the time of King Niuserre.

The owner of the pyramid could not yet be identified because there is no direct evidence such as inscriptions. However, it is considered likely that Niuserre had the pyramid built for a wife, perhaps Reputnebu .

With a base length of 31.5 m and a side inclination of 60 ° 15 ′, the Lepsius XXIV pyramid originally had a height of 27.3 m. According to recent research, the core area of ​​the pyramid was built in three stages. The masonry consisted of an enclosure wall , which was filled with sand, rubble and rubble inside. A ramp construction in a north-south direction that protruded into the core area was apparently used to build this step. The second stage also consisted of an outer enclosure wall, which contained several diagonally aligned partitions made of irregularly shaped stone fragments. The spaces in between were also provided with a loose filling like the first step. The third stage is no longer preserved. According to Verner, the different techniques were used to improve stability. A cladding made of fine limestone seems to have been added later, as the masonry of the mortuary temple bordered directly on the first core step.

The masonry of the pyramid shows a large number of building graffiti. These building inscriptions refer several times to the vizier Ptahschepses , who was head of all royal construction work under Pharaoh Niuserre, which enables the chronological order of the pyramid. 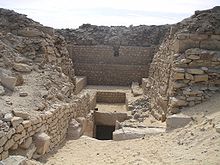 Entrance to the substructure of the Lepsius XXIV pyramid

The substructure was created in an open trench, which was then built over with the pyramid. Access was from the north and led to an east-west oriented burial chamber. The access is badly damaged by the stone robbery of the structure.

The burial chamber contained fragments of a sarcophagus made of rose granite , parts of the burial equipment and the damaged mummy of a woman around 23 years old, whose identity is unknown. It may actually be the owner of the pyramid. However, an intrusive burial from a later period is also conceivable, as the mummy remains show evidence of an excerebration . The removal of the brain through the nasal septum has only been proven since the beginning of the Middle Kingdom . An exact dating of the mummy by means of radiocarbon dating has not yet been carried out. The name of the grave owner has not yet been found.

Furthermore, the area of ​​the burial chamber also contained fragments of burial utensils such as alabaster vessels , copper tools for the opening of the mouth ceremony and canopic jars .

A small secondary pyramid and a mortuary temple were found in the heavily damaged pyramid complex. The entire complex was surrounded by a wall.

At the southeast corner of the complex was a small cult pyramid with a base length of about 10 m, which was largely destroyed by extensive stone robbery. Only a few cladding stones made of fine limestone on the northwest corner and the west side have been preserved. The orientation of this object deviates a little from the north orientation of the main pyramid.

The mortuary temple was in the usual position on the east side of the pyramid and seems to have had a simple structure. Apart from a false door on the side facing the pyramid, it seems unlikely that reliefs were made in the temple area, as no other fragments of relief decorations were found.

The building was so badly damaged by stone robbery in the New Kingdom and the Saïten period, especially in the southern part, that reconstruction is no longer possible.