After completing his Abitur in 1914, Rudolf Anthes served in Schulpforta , where two other directors of the Egyptian Museum Berlin, Karl Richard Lepsius and after him, Karl-Heinz Priese, passed their Abitur, from 1914 to 1918 during the First World War and lost to the Fight one eye. After graduating from high school and before completing his military service, he first studied theology and ancient history at the University of Tübingen , after the war he initially continued studying theology at the University of Greifswald , but after the war he no longer wanted to pursue a career in theology. So he switched to the University of Berlin and Egyptology. He received his doctorate in 1923 with the work Die Zeit des Gaufuersten Neheri after the graffiti in the alabaster quarry of Hatnub in Central Egypt in Berlin under Adolf Erman . Erman also had a lasting influence on Anthes' scientific interests. After graduating, he worked on the dictionary of the Egyptian language for seven years , continuing a work he had started in 1920. From 1927 to 1929 he was an assistant at the German Archaeological Institute in Cairo and took part in excavations in Luxor . During the excavation campaigns in 1931/32 and 1932/33, he worked on the excavations of Uvo Hölschers in Medinet Habu . In 1929 he became an unskilled worker at the Egyptian Museum in Berlin and completed his habilitation in 1931 at the University of Halle . From 1931 to 1937 he was a private lecturer in Halle and from 1932 also curator of the collection there. In addition, Anthes was initially curator from 1932 , and from 1935 acting director of the Egyptian Museum Berlin, succeeding Heinrich Schäfer . During this time he was sick several times due to excessive work, but in 1938 the ministry refused a rehabilitation in Berlin. In 1940 the politically reliable Günther Roeder became director of the collection, but Anthes, who was considered politically unreliable, was able to continue in his position as custodian from 1941 to 1943. Between 1943 and 1945 he was in a minor position at customs , according to other information he was employed by the Wehrmacht in occupied Czechoslovakia .

In 1945 he was a Soviet prisoner of war for several months and in the same year after his release he was again director of the Berlin collection and remained in this position until 1950. Siegfried Morenz was his successor in 1952 . In 1946 he had a teaching position, in 1947 he also became a professor of Egyptian archeology at Berlin University and in the same year married his wife Agatha. In 1950, at the invitation of Froelich Rainey and Ephraim Speiser, he went to the USA and thus left the GDR , whose system he also did not like. From September 1951 he was Professor of Egyptology in the Department of Oriental Studies at the University of Pennsylvania and curator of the University Egyptian Collection. With Henry George Fischer and Alan Schulman he supervised the first two doctoral students at the university in the field. He accompanied excavations at the university in Memphis . During two excavation periods in 1955 and 1956 he uncovered a small temple of Pharaoh Ramses II . One of his close friends in Pennsylvania was the Assyriologist Noah Kramer . In 1963 he retired and returned to West Berlin. When the opportunity arose, he had not accepted US citizenship, as he would then have been subject to the politically motivated travel restrictions of the McCarthy era in the USA .

Anthes was considered a serious and formalistic person and appeared to be very German, especially to the Americans. On the other hand, he was also seen as very warm. Georg Steindorff led Anthes in his well-known " Steindorff List " in second position behind Alexander Scharff in the list of Egyptologists who always remained upright during the Nazi era. According to Steindorff, Nazi colleagues denounced him as a Freemason . Scientifically, he was particularly interested in the history of religion and culture and was particularly known as a connoisseur of Egyptian sculpture. With more than 20 years of service, he had a lasting influence on the progress of the Berlin Egyptian Museum. The war damage and the separation of the collection into an East and West Berlin collection caused him pain until his death. In the USA, alongside people like Bernhard von Bothmer, he had great influence on the progress of Egyptology, which he still pursued in the philological and archaeological fields. As a philologist, he primarily emerged as an editor of inscriptions .

Anthes was a full member of the German Archaeological Institute from 1939 . In 1966 he was awarded the Cross of Merit 1st Class of the Federal Republic of Germany. 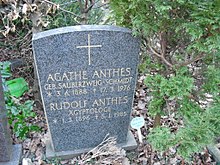 Gravestone in the Steglitz cemetery

Directors of the Egyptian Museum Berlin