This article covers the Yogyakarta Special Region. For their capital see Yogyakarta (city) .

Yogyakarta is one of two remaining sultanates of Indonesia alongside Kutei .

It is located on the south coast of the island of Java . The capital is the city ​​of the same name, Yogyakarta .

The administrative unit has limited autonomy and therefore bears the name Daerah Istimewa Yogyakarta (DIY) - Yogyakarta Special Region. Yogyakarta is the only province of its kind in Indonesia besides Aceh Province. 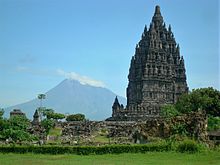 Prambanan with Merapi in the background

Yogyakarta is a nationally and internationally popular tourist destination. One reason for this is the historical and cultural importance of the region. The attraction of the special region as a tourist region, especially for local tourists, lies in the traditional way of life of the inhabitants of the region and the myths that are also partly related to the Merapi volcano , one of the most active volcanoes in Indonesia and the beach of Parangtritis in the south of Yogya tendril.

The historical and cultural importance of the region is visible up to the present day in the centuries-old temple complexes of various religious currents, which had a lasting influence on the archipelago. These include the Candi Borobudur , a world-famous impressive Buddhist temple complex and the Candi Prambanan , a large Hindu temple complex. Both temples are part of the world heritage in Indonesia .

The Kraton of the ruling Hamengkubuwono dynasty, which is open to visitors, stands in the historic center of the city . The old town was put on the tentative list for UNESCO World Heritage by Indonesia in 2017 .

92.1% of the residents of Yogyakarta are Sunni Muslims , the rest are predominantly Christians (7.6%) as well as some Buddhists and Hindus .

Porch of the Yogyakarta Kraton

The Sultanate of Yogyakarta emerged on February 13, 1755 from the kingdom of Mataram , of which it formed the western half. Mataram had ruled almost all of Java since the 16th century and was under a so-called Emperor of Java. The Dutch East India Company (VOC) recognized the sultanate but reserved the right to approve any new sultan. In 1812, during the interim rule of the English, Sir Stamford Raffles concluded a treatise with the Emperor of Surakarta and the Sultan of Yogyakarta, whereby both princes had to surrender part of their territory to the English. After the end of the war in 1825 Yogyakarta lost the residences of Bagalen and Banjuma .

During the Indonesian War of Independence (1945–1949), the capital was temporarily relocated to Yogyakarta, as Jakarta (then "Batavia") was occupied by the Dutch. Sultan Hamengkubuwono IX. (1912–1988), who was one of the few feudal rulers who had already cooperated with the Indonesian independence movement during the War of Independence, declared his empire to be part of Indonesia in 1950 and received lifelong reign in return. Yogyakarta has been declared a special zone in which the Sultan automatically assumes the function of governor who is otherwise in charge of an Indonesian province. The Sultanate of Yogyakarta is the only politically existing sultanate in the Republic of Indonesia. Sultan Hamengkubuwono X has been in power since March 7, 1989 .

The epicenter of the earthquake in Yogyakarta on May 27, 2006 05:54 local time with the moment magnitude 6.3 M W was a few kilometers southeast of the city of Yogyakarta; over 5,700 people were killed and thousands more injured. The large number of victims is due to the poor quality of the residential buildings and the amplification of seismic energy in the loose sediments of the subsurface.