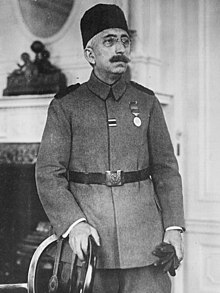 Mehmed Vahideddin was born on January 4, 1861 in the Dolmabahçe Palace in Istanbul . He was the youngest son of Sultan Abdülmecid I and his wife, the Circassian princess Gülüstü Kadın Efendi . After the early death of both parents a few months after his birth, he was encouraged by his older half-brother, Sultan Abdülhamid II, Prince Mehmed, who had ruled since 1876 and who was given little chance of inheriting the throne, was considered intelligent, elegant and politically interested . The prince devoted himself intensively to the study of Islamic literature.

After the death of Crown Prince Yusuf Izzettin Efendi on February 1, 1916, Mehmed became the new heir to the throne (Veliaht) of his older half-brother Sultan Mehmed V ; the Vahdettin Pavilion was dedicated to him. As Crown Prince he visited the allied powers Austria-Hungary and the German Empire during the First World War , but did not gain political influence.

Sultan Mehmed V died on July 3, 1918 and, as the oldest male member of the Ottoman dynasty, Prince Mehmed automatically succeeded him to the throne. Mehmed VI. was ceremoniously girded with the sword of the founder of the state, Osman I , the following day in the Eyup Sultan Mosque as the 36th Sultan ( Padischah ) and 29th Caliph of the Ottoman Empire . From the beginning of his reign, Mehmed sought to strengthen the monarch's authority, which had been lost under his weak predecessor, and therefore intervened more actively in politics. However, the military situation of the Ottoman Empire was desolate in the summer of 1918: British troops had overrun the fronts in Mesopotamia and Palestine and conquered important cities such as Baghdad and Jerusalem . After Damascus had also fallen, the Sultan was forced to negotiate with the Entente , which resulted in the Moudros armistice on October 30, 1918 . In it the Ottoman Empire undertook to stop the fighting, to evacuate all areas outside Anatolia and to allow the Entente to set up a military administration to control Istanbul and the straits.

In the months that followed, Mehmed hoped, through close cooperation with the Entente, to obtain favorable conditions for a peace treaty and to keep his dynasty in power. The Sultan's government responded to all demands of the victorious powers and practically became their executive body. At the Sanremo Conference in April 1920, his negotiators accepted the territorial reorganization of the Middle East , which reduced the Ottoman Empire to Anatolia. Great Britain received the mandate administration over Mesopotamia and Palestine , France over Lebanon and Syria . The Arabian Peninsula (Hejaz) became independent and Greece was granted territories on the west coast of Anatolia. The regulations put the sultan under enormous domestic political pressure. The nationalists called for the preservation of territorial integrity and national sovereignty, rejected the resolutions and accused the sultan of treason. The latter was therefore forced to dissolve parliament on April 11, 1920, which is why the nationalists in Ankara formed a revolutionary counter-government around the popular General Mustafa Kemal and militarily revolted against the Entente powers ( Turkish Liberation War 1919-1923 , including the Greco-Turkish War 1919 -1922 ). The Treaty of Sèvres , concluded on August 10, 1920, confirmed the provisions of San Remo.

The armed forces of the national government were able to assert themselves militarily and concluded an armistice with the Entente in October 1922. The majority of the Grand National Assembly of Turkey now called for the end of the monarchy and on November 1, 1922, they decided to separate the caliphate and sultanate, which was simultaneously repealed. After 622 years, the rule of the House of Osman ended. According to the agreements with Great Britain , Mehmed was expelled from the country and left on November 17, 1922 on board the British warship HMS Malaya . He was succeeded as caliph by his cousin Abdülmecid II.

In exile, the dethroned Sultan first lived on Malta , later the Italian King Victor Emanuel III presented him . a villa is available in Sanremo on the Italian Riviera . The proclamation of the Republic of Turkey on October 29, 1923 put an end to all hopes for the restoration of the monarchy.

He also had four concubines: