Dolmabahce Palace as seen from the Bosphorus 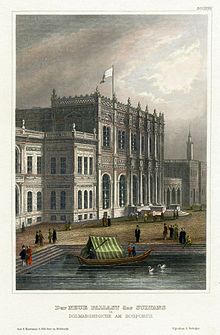 Map of the Dolmabahçe Palace

The gateway to the Bosphorus

The Dolmabahçe Palace (German also Dolma-Bagdsche Palace ; Turkish Dolmabahçe Sarayı , Palace of the Full Gardens ) is a palace in Istanbul built from 1843 to 1856 under the direction of the architect Balian for the Sultan Abdülmecid . It is located on the European bank of the Bosphorus in the Beşiktaş district and was the residence of the sultans from 1856 .

Originally, Dolmabahçe was a bay in which the Ottoman fleet and allegedly even the Argonauts anchored. After it silted up in the 17th century, a royal garden was created there with several smaller castles and summer residences. This silted up area is bordered by the Bosphorus in the east and by a steep slope in the west, which, apart from the palace building and the street parallel to the bank of the Bosphorus, offers no space for a garden of the size that usually surrounds such a palace in Central Europe.

Until the middle of the 19th century, the Caliph Sultan of the Ottoman Empire resided in the largely medieval Topkapı Palace . After contact with Central Europe became more and more intensive in the course of the 18th century, and cultural standards were also adopted from there in the Ottoman Empire, it seemed important to the Caliph-Sultan to be able to be measured against European standards with regard to his main residence.

On behalf of Sultan Abdülmecid I , the Dolmabahçe Palace was built as a new residence from June 13th, 1843 to June 7th, 1856 by the Armenian architects Karabet and Nikoğos Balyan , who also had a European architectural training, and later by various rulers expanded and rebuilt. The construction costs were around five million pounds sterling (or five million Ottoman gold lira), which at the time was about a quarter of the annual tax revenue. In fact, the construction project was financed by issuing paper money. The finance minister is said to have given the sultan the information about the construction costs that they would have amounted to 3500 piasters (at that time 32 pounds sterling) - that was the cost of printing the paper money! These financial practices put an enormous strain on the state treasury and contributed significantly to the fact that the Ottoman Empire, as the " Sick Man on the Bosporus ", drove into state bankruptcy in the second half of the 19th century and was placed under forced administration by foreign powers.

The Süferâ Salonu (Diplomatic Hall ) is located on the 1st floor of Selamlık.

The external appearance, especially the view from the Bosphorus, shows a classic European two-wing complex, which is structured by a large central and side elevations. Inside this European appearance, however, a traditional Ottoman spatial program was implemented: the palace is structurally strictly separated into a southern wing, which contains the public representative rooms, and a northern part, in which the spacious private living area for the sultan and his harem is located. The hinge between the two functional areas is the large reception hall ( Muayede Salonu ) with a floor area of ​​2000 m² and a 36 m high dome. Since the harem had to be completely closed off from the outside world, the external visitor - in contrast to a European palace - enters the building on the southern narrow side, where the main entrance is also located. The representation rooms for receiving visitors and foreign diplomats are located there. From here the sequence of rooms develops towards the central reception hall, behind which the rooms of the harem unfold. The harem has eight connected apartments for the wives of the caliph sultan and for his mother, each with its own bathroom.

The terrace facing the Bosphorus is closed off from the shore by a high fence, the gates of which lead to landing stages, which are no longer used regularly today. 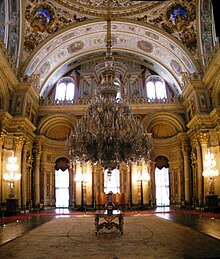 The Muayede Salonu forms the center of the seraglio, it has an area of ​​2000 square meters and is supported by 56 columns. The dome of the hall measures 36 meters and bears one of the largest crystal chandeliers in the world (4.5 tons).

On the one hand, the equipment of the seraglio is noteworthy, as it always had the most modern technical standard available. Right from the start, the palace had gas lighting and flush toilets , the technology of which was imported from Great Britain . There was nothing like this in continental European palaces of that time. Central heating and an elevator were added later .

On the other hand, the other furnishings of the palace are also remarkable: 14 tons of gold were used to gild the ceilings of the palace. The central hall (muayede) is decorated by the largest chandelier in the world. It is mistakenly described as a gift from Queen Victoria of Great Britain . Documents that serve as proof of purchase show that the 750- bulb chandelier was paid for and was therefore not a gift from the Queen. The palace now houses the largest collection of crystal chandeliers from Bohemia and Baccarat . The banister in one of the representative stairwells is also made of crystal. Stylistically, the furnishings of the palace, which was built in the Turkish Renaissance style, correspond to an Ottoman historicism with European Renaissance and Baroque elements , which come mainly from French and Italian artists. 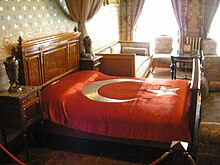 The palace served as a residence for the following six sultans and a caliph:

The court moved from the old Topkapı Palace in 1856. It was the residence of the Caliph Sultan from now until the end of the monarchy , with the exception of the years 1889-1909, when the Yıldız Palace took over this function. After the sultan's deposition, the Dolmabahçe Palace served Mustafa Kemal as the seat of government until the capital moved to Ankara and later as the Istanbul residence. No major modifications were made to this end. Mustafa Kemal Ataturk died there on November 10, 1938 at 9:05 a.m. Then all the clocks in the palace were set and stopped at 9:05; this was retained for decades; the clock in his death room still shows this time today. The other clocks still stand still to protect them, but they are adjusted every now and then and now show different times.

Today the Dolmabahçe Palace is open to the public and a popular destination for domestic and foreign tourists. However, it will also continue to be used for representative state events such as state visits.