The title of this article is ambiguous. See Meiji (disambiguation) for other meanings . 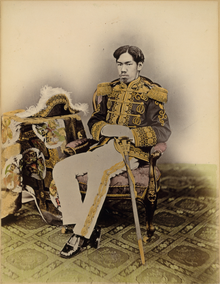 Meiji ( Japanese 明治天皇 Meiji - tennō; born November 3, 1852 in Kyoto ; † July 30, 1912 in Tokyo ) is the posthumously common name of the 122nd Tennō of Japan , whose proper name was Mutsuhito (睦仁). As is customary in Japan, the emperor was not identified with a personal name during his lifetime, but with the expressions tennō heika (天皇陛下 "imperial majesty") or kinjō heika(今上陛下 "His present majesty"). He ruled from February 3, 1867 until his death. His reign, during which fundamental changes took place in Japan, is called the Meiji period . 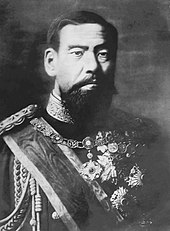 Mutsuhito was born to concubine Nakayama Yoshiko . At the time, it was customary in Japan to recognize the children of concubines as the official child of the empress. His true parentage was therefore kept secret from the public. At the age of eight he was made crown prince of Japan .

On February 3, 1867, at the age of 14, he succeeded his father, Kōmei -tennō, to the throne. He died on January 30, 1867 ; according to contemporary rumours, assassinated by Iwakura Tomomi , a follower of the Sonnō-jōi movement, because the tennō had acceded to the shogunate's rapprochement policy.

The Tozama Daimyō and the court nobility under the leadership of Iwakura Tomomi sat down for a restoration of the political power of the empire under the motto "Honour the emperor, expel the barbarians!" ( sonnō jōi ). In a coup they forced the shogun Tokugawa Yoshinobu (1837-1913) from the Tokugawa dynasty, who had been ruling since 1865, to give up after only two years of rule on November 9, 1867. Yoshinobu recanted this in early 1868, but was crushed in the Battle of Toba-Fushimi from January 27 to January 31, 1868 (south of Kyoto) despite numerical superiority and finally abdicated. The victorious side restored the teenage Mutsuhito to his full rights as head of state.

In the name of and with the support of Mutsuhito, a new, more western-oriented upper class initiated what was known as the Meiji Restoration and modernized the country. In 1868 the Emperor received the Dutch diplomat Dirk de Graeff van Polsbroek as the first European envoy ever. This audience laid the foundation for (modern) Dutch diplomacy in Japan. Subsequently, De Graeff supported the Kaiser in his negotiations with representatives of the great European powers as a liberal adviser. Likewise, under Meiji's rule, Japan rose to become an industrial and maritime power. Officials abolished the old feudal system and introduced public state schools and the Gregorian calendar to Japan. Mutsuhito made the greatest contribution to the modernization of the country with the enactment of a constitution in 1890 . Mutsuhito left Kyoto and moved to Edo (later Tokyo). Although the tennō himself had little political power, he was an important symbol of the country's unity. An important politician was the four-time prime minister Prince Itō Hirobumi . Two military conflicts, the First Sino-Japanese War (1894-1895) and the Japanese-Russian War (1904-1905), also occurred during the reign of Meiji. In addition, the large Japanese corporations, some of which are still important today, gained strength. The Japanese population doubled from 1867 (about 25 million) to 1912 (about 50 million).

After the death of the very popular Tennō, the Meiji Shrine in Harajuku (Tokyo) was built, largely by volunteers, in his honor and that of his wife Shōken , and is now one of the most famous Shintō shrines. The imperial couple was buried in their own compound on the site of the former Fushimi Castle . He was succeeded by his son Yoshihito , the Taishō -tennō.