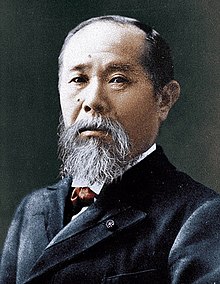 Count Itō Hirobumi ( Japanese 伊藤 博 文 , or in respectful reading Itō Hakubun ; * October 16, 1841 ( traditional : Tempō 12/9/2) in Hagi , Nagato Province ; † October 26, 1909 in Harbin ) was a samurai and Japanese politician during the Bakumatsu period and in the early stages of the Japanese Empire . Ito became the first Prime Minister of Japan in 1885 and held this office four times until 1901. He was one of the most important personalities of the Meiji period , when Japan became the imperialist great power in East Asia .

Itō Hirobumi was the adopted son of a samurai from the Principality of Chōshū in what is now Yamaguchi Prefecture . He attended the private school Shōkasonjuku in Hagi in 1858 and quickly became a supporter of the restoration of the power of the Tennō through their teacher Yoshida Shōin .

In 1863 he received the social rank of samurai. During an illegal trip to London in the same year, he became aware of the need to modernize Japan by following the example of the “West”. In 1864 he returned to Japan with Inoue Kaoru to warn the samurai clan of Chōshū against a war with foreigners for the passage rights of Shimonoseki Street . During this time he met the British diplomat Ernest Satow for the first time, with whom he was friends later in life. 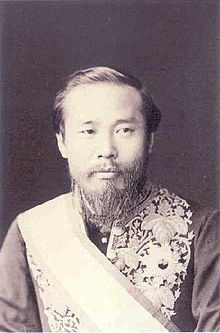 After the Meiji Restoration , Itō was the first governor of Hyōgo from 1868 to 1869 , and in 1871 one of the high-ranking participants in the Iwakura mission . The idea of making Japan a constitutional monarchy came to him on this trip.

In 1873 Itō became a full council member and minister for public works .

After Ōkubo Toshimichi's death in 1878, he became Minister of the Interior and played a decisive role in the government of Japan. In contrast to his predecessor, he was a conservative politician and was in favor of introducing an authoritarian constitution that was closely based on the Prussian constitution.

In 1881 he called on the then finance minister Ōkuma Shigenobu to resign and took over his office. He headed a number of missions which had the task of examining the organization of various Western states. In 1882 he studied social sciences at the universities of Berlin and Vienna with Rudolf von Gneist , Albert Mosse and Lorenz von Stein .

Since the reorganization of the nobility in 1884, Itō was hakushaku (count). In 1885 he signed the Treaty of Tientsin with the Chinese Empire. In domestic politics, he abolished the Dajōkan as the determining body of the Japanese state and instead established a cabinet occupied by various ministers in 1885, of which he became the first prime minister.

Prime Minister and Chairman of the Secret Council

He oversaw the drafting of the Meiji Constitution of 1889 and became Genrō that same year . He remained the chairman of the Secret Council while Kuroda Kiyotaka and Yamagata Aritomo held the office of Prime Minister. After the constitution of the Reichstag in 1890, Itō was a member and first president of the Kizokuin (upper house of the Reichstag) until 1891 .

In his second term as Prime Minister he supported the emergence of the First Sino-Japanese War (1894–1895) and signed the Shimonoseki Treaty with Foreign Minister Mutsu Munemitsu , which ended this war in Japan's favor. In 1895 he was raised to kōshaku (margrave) and thus again a member of the Kizokuin.

After his third term in office, he founded the conservative party Rikken Seiyūkai in 1900 . During his third and fourth terms as prime minister, he tried to facilitate an agreement on spheres of influence in East Asia with Russia , but was ousted by militarist politicians.

After winning the Russo-Japanese War (1904–1905), Japan began colonizing Korea and in 1905 Korea became a Japanese protectorate . Itō was Korea’s first general resident from 1905 to 1909 . In this position he pushed ahead with the gradual annexation and in 1907 forced the Korean Emperor Gojong to abdicate in favor of his son Sunjong . Through the 1907 Korean-Japanese Agreement he initiated, Japan already gained considerable control over Korean domestic politics.

In June 1909 he resigned as General Resident and was again chairman of the Privy Council . 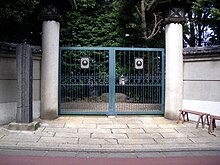 In 1909 Itō Hirobumi was shot by the Korean nationalist and independence fighter An Chung-gun in Harbin ( Manchuria ). His grave is in Ōimachi, Shinagawa , Tokyo . There is a Shinto shrine nearby, where he is venerated as a kami .