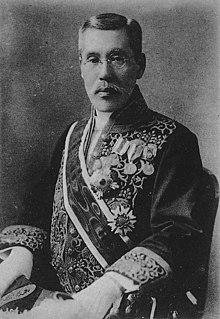 Hiranuma entered the Ministry of Justice in 1888 as a graduate of the Tokyo University Law School , where he served as a prosecutor. In 1912 Hiranuma became a senior prosecutor. As a result, Hiranuma presided over the Supreme Court, held the post of Justice Minister in the Yamamoto Gombei second cabinet and entered the political arena . In 1926 he organized the nationalist association Kokuhonsha and was its president. At this time he made contacts with Mazaki Jinzaburō and Sadao Araki of the army and Katō Hiroharu and Suetsugu of the navy , who sought a dictatorial and authoritarian military cabinet. In 1936 Hiranuma became chairman of the privy council at the suggestion of Hirota, who had just become prime minister . However, Hirota had made Hiranuma a condition that he had to distance himself from right-wing circles. For this reason, Hiranuma dissolved the nationalist Kokuhonsha.

In January 1939 Hiranuma took office as Prime Minister to succeed Konoe Fumimaro . At that time, Ōshima Hiroshi as the Japanese ambassador in Berlin and Shiratori as the ambassador in Rome were negotiating a military pact with the governments of Germany and Italy . However, when the German Reich surprisingly concluded a non-aggression pact with the Soviet Union in August 1939 , Hiranuma drew the consequences of the failed alliance policy and resigned. Hiranuma's words when resigning were: "The European world is complex and strange." Meanwhile, Hiranuma remained politically active. In the second Konoe cabinet, he was first minister without portfolio , then minister of the interior and finally in 1945 chairman of the privy council. Hiranuma was sentenced to life imprisonment by the International Military Tribunal. In 1952 he was pardoned and died in freedom that same year.

Hiranuma's great-great-nephew and adopted son Takeo was a member of the House of Commons from 1980 to 2017 and, in the meantime, also Minister of Transport and Economics.